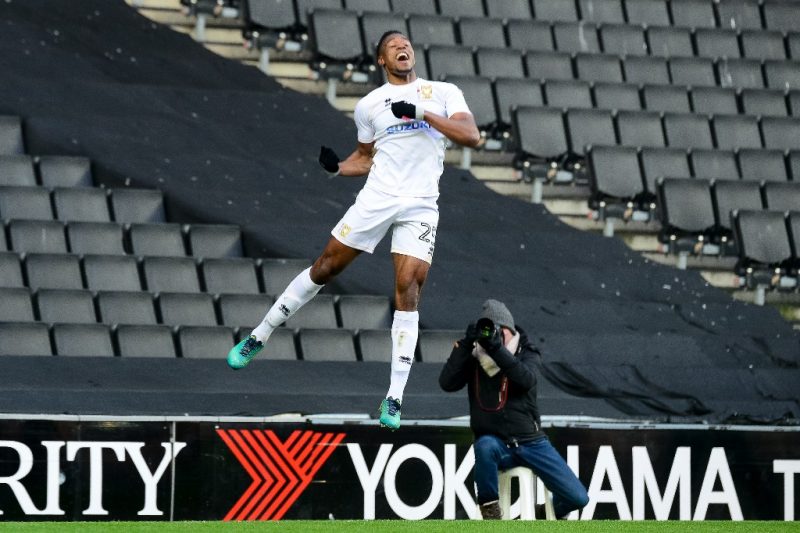 CHUKS Aneke is striving to make up for lost time but, in order to realise his ambitions, he will need to help haul MK Dons out of their slump.

The 24-year-old, who joined the Dons in the summer of 2016, is finally enjoying an extended run of games in a white shirt, having been ravaged by a succession of major injuries during his time in Milton Keynes.

Indeed, ex-manager Karl Robinson signed the former England Under-19 international on a free transfer from Belgian top-flight side Zulte Waregem when he was still suffering with a knee injury.

And, in February, a ruptured hamstring, picked up in a game against Bradford at Valley Parade, sidelined him for six long months.

Skilful and athletic midfielder Aneke, who has mostly been used as a forward this term, has played regularly since September, scoring five goals in his last 11 games before the weekend.

And, while he came to the party late this season, the former Arsenal trainee is now tasked with attempting to revive the Dons’ flagging fortunes.

With the club floundering in the lower reaches of League One and looking some way off mounting an expected play-off charge, there is plenty of work on the horizon, but Aneke feels all that’s lacking at Stadium MK is a drop of belief.

“We find ourselves in a league position that doesn’t really reflect the quality we have, so in this next half of the season, we’re aiming to click and push up the league,” said Aneke.

“Getting the team cohesion is not an easy thing but I was out for a long time and so were certain players.

“We’re just waiting to make that push forward and to get some good results.

If you want to get added value for your results, check out these Sign Up Bonuses

“When things are not going great, confidence can impact results. But I think, if we can get that confidence back, we can push forward.

“I came back for my first game in September and, although I’ve scored a few goals and made a few assists, I feel like I’m ready to kick on, just like the team is. My character is that I’m a winner, so I want to win games, regardless of whether it’s training or on a match day.

“I want to have a whole season of football behind me. That’s my motivation.”

As a youngster, Aneke was part of the Arsenal Under-18s side that won the Premier Academy League in 2009-10.

At one time, the Londoner was even sounded out by Barcelona, alongside present Bournemouth striker Benik Afobe, who once had a loan spell with the Dons and remains a close friend.

His two seasons in Belgium with Waregem, whom he joined in 2014 after leaving the Gunners, might not have been a roaring success.

But, having signed a new two-year contract in August, he is out to make the second part of the current campaign one to remember.

“I play in League One, so you’ve got to mix it up a little, but the way I play has been influenced massively by how I was brought up in the Arsenal academy,” he added.

“It was a long time ago now, but I had some good memories there.

“I feel like I grew up a lot during that time and I’m in this position now at MK Dons where I want to push on with my career.”