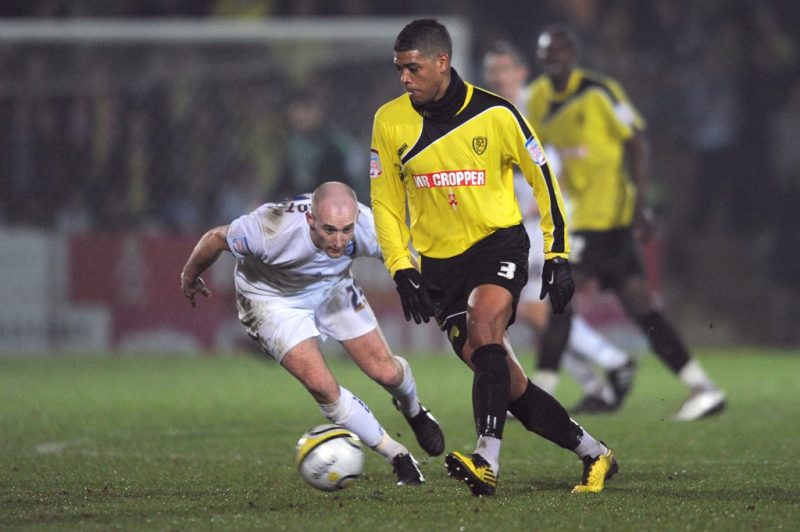 BURTON Albion legend Aaron Webster will take the lessons he learned playing under Nigel Clough as he starts out in management – but he’ll do it his own way as well.

Defender Webster played 588 times – and scored 100 goals – to become second on the list of the Championship club’s all-time appearances behind Darren Stride.

Now the 36-year-old is taking his first steps into management with EVO-STIK South outfit Belper Town. If he’s as successful as Clough, then he won’t go far wrong.

Clough oversaw a remarkable rise from the Dr Martens League to the Football League via the UniBond Premier and the Conference – although he left before their title triumph for Derby County.

Webster says a tight bond in the changing room was a powerful weapon in their armoury.

“It’s kind of the same thing I put in my portfolio to get the Belper job,” he says. “We were all local lads, friends on and off the pitch, we weren’t on great money but because we saw each other out of football and had a drink after, as soon as we got on the pitch we fought blood, sweat and tears for each other.

“Nigel was always clever with the signings he made. He never made eight or nine every season, it was always two or three. Just adding a little bit to make the squad better than the season before. It was run very cleverly.

“Having that experience as a player and seeing how it was done then, I think Belper are kind of in the same situation.

“The budget’s not amazing but with my contacts from Derby, Nottingham and the Burton area, I can get a nucleus of lads from around the same way who may be friends off the pitch. I want that same ethos where we give everything for each other.”

He’s certainly learnt from one of the best in Clough, who has since returned to Burton and masterminded their promotion, and last season’s survival, in the Championship.

Webster is coach for Burton Albion’s Community Trust side – who have a partnership with Burton College and train twice a week while playing games on Wednesday – so regularly speaks to Clough, who even gave him a reference for the Belper gig.

“He was my manager for ten or 11 years,” Webster says. “He’s been a huge part of my life – not just in football but out of it as well. We’ve always been close and he’s been like a father figure to me.

“We have regular conversations now where he talks about the first team and I talk about the education team. He’s someone I will always have so much respect for.

“What he’s said has stuck. But at the same time, I’m Aaron Webster. I want to be an original, I don’t want to copy everything he’s done. There are a lot of aspects I will take from working under him, but there’s a lot of stuff I want to use from my background and my experience as well.

“I’ll give all the Belper lads a chance. I think one of my strongest points is man-management. I’m honest with players, I will give them feedback, good or bad.

“I was always brought up with tough love. Even when I’d played well, Nigel would still have something negative to say at times. He would give me praise, don’t get me wrong, but I probably had more negatives.

“When I was younger I used to think, ‘Why am I always the one being dug out?’ But getting older and realising, I know he did it for a reason – he wanted me to get better.”

Webster’s first game in charge on Tuesday ended in a penalty shoot-out victory against Long Eaton United in the Derbyshire Senior Cup. He’s up and running.

Webster’s old boss Clough and his Burton team will be looking for an upturn in form over the festive period and you can bet on their next game, as well as many others, at 888sport.