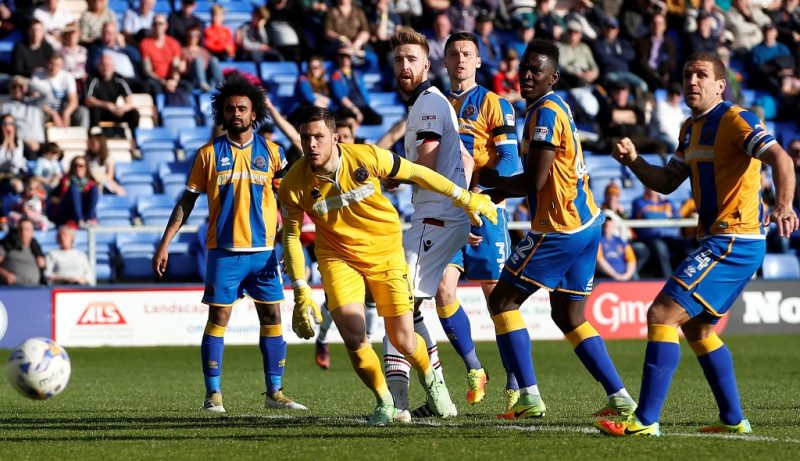 When Shrewsbury Town have won this season – which has been a lot – they have regularly done it in frustrating (for their opponents) and peculiar fashion.

The Shrews are the unexpected early leaders in League One, sitting pretty five points clear at the top of the table. Eight games, seven wins and no losses is the form of champions, and while no prizes are handed out in September, Paul Hurst has to be delighted with his side’s early season form.

They were victorious again on Saturday, weathering an Oldham Athletic storm to run out 2-1 winners at Boundary Park courtesy of goals from Stefan Payne and Jon Nolan.

That win was their fourth straight three points in the league since they dropped their only two points of the campaign at Oxford at the end of last month.

The frustrating thing for Oldham – and for Southend, Wigan etc. – is that the game was decided in Salop’s favour by a single goal.

Yes, every single victory Shrewsbury have recorded in League One this season has been won by just one goal.

Northampton fell on the opening day of the season 1-0, followed by AFC Wimbledon who were defeated by the same scoreline. Rochdale put up a good fight next time out, but they too were beaten – 3-2 on that occasion.

Then came the draw with Pep Clotet’s men, an aberration in fact. Normal service was resumed at the Priestfield Stadium where they overcame Gillingham 2-1, before 1-0 wins over Wigan and Southend brought us to the Oldham victory at the weekend.

This isn’t a sustainable tactic of course, or a tactic at all but rather one of those quirks the football gods bestow upon us every now and then.

What this extraordinary run of form is built on, however, is incredible consistency and familiarity within the team. The defence is settled, with goalkeeper Dean Henderson the clear number one and four defenders starting at least eight games this season.

Junior Brown has been a staple of the team for a while now, offering skill and versatility to the XI. Likewise Aristote Nsiala, who has seamlessly made the step up from Hartlepool since arriving in January.

In midfield, Jon Nolan has come in from relegated Chesterfield in the summer and brought energy and determination to the side. Shaun Whalley, a staple of the team by now, shoulders much of the creative burden alongside Nolan.

Up front, striker Stefan Payne has built on his loan spell at the club last season by becoming the focal point for the team. Five goals in seven league games is a terrific return from the former Dover Athletic hitman.

Tying it all up in a pretty bow is one of the Football League’s finest young managers. 42-year-old Paul Hurst has built on his success with Grimsby by solidifying Shrewsbury as a League One club – and the way things are going potentially a Championship club before too long.

The Shrews aren’t flashy, but they’re incredibly hard to beat and are adept at doing just enough to claim the three points. The season is young, but under the guidance of Hurst it looks like the only way is up for the club.