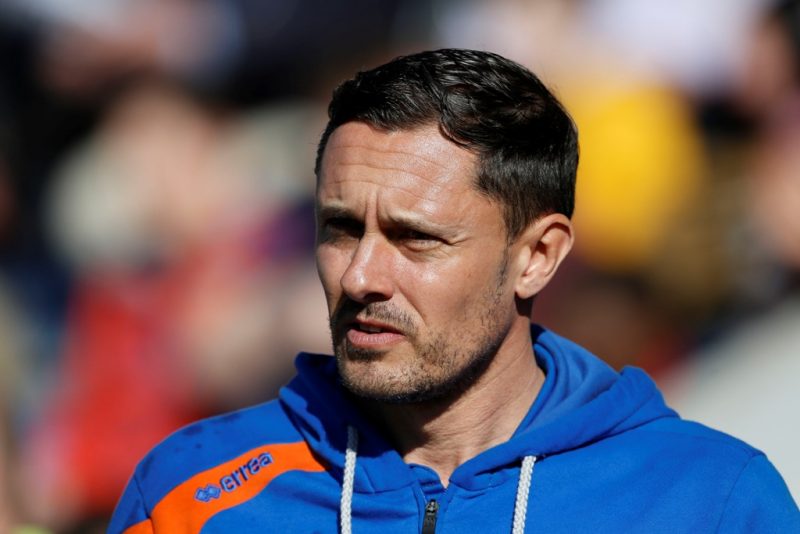 While the attention of Premier League and Championship fans was diverted towards England struggling to break down Malta and the Republic of Ireland drawing with Georgia, it was business as usual for League One and Two spectators over the weekend.

In League One, Peterborough’s 100% record was dented by former boss Darren Ferguson’s Doncaster Rovers side, the hosts securing a goalless draw at the Keepmoat Stadium. Fresh from signing his contract extension, it was Posh midfielder Marcus Maddison who went closest to scoring, his first-half effort bouncing off the crossbar.

Peterborough’s failure to win saw them joined at the top of the table by Shrewsbury. Paul Hurst’s team claimed a 2-1 win at Gillingham on Saturday. Norwich loanee Carlton Morris putting the Shrews ahead after half an hour, before setting up Alex Rodman’s header shortly after. Gills got one back through Josh Parker 15 minutes from time, but were unable to salvage a point.

Charlton moved up to third after edging a topsy-turvy encounter 4-3 at Oldham. A stunning 30-yard strike from Ricky Holmes put the Addicks ahead after 18 minutes, and Tariqe Fosu doubled their advantage four minutes later.

The Latics got back into it, though, when Craig Davies converted a penalty on 34 minutes. On-loan Preston striker Eoin Doyle then equalised six minutes into the second half. Oldham substitute Ousmane Fane saw red for a second bookable offence soon after, and Fosu compounded their misery by putting Charlton back in front.  Rangers loanee Joe Dodoo added a fourth on 72 minutes, before Jack Byrne got one back eight minutes from time.

Scunthorpe maintained their positive start to the season with a 1-0 win over Bury. A Josh Morris free-kick with four minutes left was enough for the Iron. Bradford grabbed their third league win of the campaign, beating Bristol Rovers 3-1 at Valley Parade. A superb Charlie Wyke hat-trick rendered Billy Bodin’s goal moot.

Rochdale are still searching for their first win of the season after being held 0-0 by Southend, while Blackpool beat 10-man Wimbledon 1-0. Sean Longstaff’s goal did the business for Gary Bowyer’s men, before Nadjim Adjou saw red for a foul on Callum Cooke.

Oxford managed a 1-1 draw at MK Dons, Rob Hall’s curling effort for the U’s cancelled out by Callum Brittain’s first senior goal. Walsall overcame Plymouth Argyle 2-1 at the Bescot Stadium, Dan Agyei and Erhun Oztumer striking for the Saddlers, while Graham Carey was on target for Plymouth.

And on Sunday Rotherham snapped their long run of away games without victory by beating Portsmouth 1-0 at Fratton Park. Jon Taylor’s goal secured Rotherham their first away win in 27 games.

The League Two leaders Exeter kept their unbeaten start to the season alive with a 1-0 victory over Newport County. Lee Holmes excellent strike into the bottom corner on 57 minutes secured three points for Paul Tisdale’s side, while the loss saw Newport drop from second to seventh in the table.

Accrington are third after a 2-1 win at neighbours Morecambe. Billy Kee’s effort from distance set Stanley on their way, before Morecambe’s Vadaine Oliver saw red with half an hour remaining. Jordan Clark then extended Accrington’s lead and Kevin Ellison grabbed a late consolation for Jim Bentley’s side.

The division’s goalfest was conducted at the County Ground on Saturday, where Barnet thumped Swindon 4-1. A Shaq Coulthirst hat-trick gave the Bees the win in a game that ended with both teams with 10 men. Jamal Campbell-Ryce got the other goal for Barnet, with Luke Norris pulling one back for Town. Donal McDermott was sent off for Swindon, with Andre Blackman given his marching orders for the visitors.

Wycombe lie in fourth after beating Forest Green Rovers 3-1. Goals from Paris Cowan-Hall, Anthony Stewart and Luke O’Nien all occurred in the first half for Gareth Ainsworth’s men, Christian Doidge getting a consolation for the visitors.

Sixth-placed Luton could only draw with newly-promoted Lincoln, while Crewe lost for the first time this season, beaten 1-0 by Grimsby. Mitch Rose’s first half header was enough for the Mariners.

Carlisle and Mansfield drew 1-1, Calum Butcher converting for Mansfield after Kane Hemmings’ penalty had been saved. Hallam Hope had put the hosts in front earlier in the game. Robbie Weir was sent off for Chesterfield, who drew 0-0 with Coventry.