Home / Featured / Dan Bentley: I feel like a veteran in this up-and-coming Brentford team

Dan Bentley: I feel like a veteran in this up-and-coming Brentford team 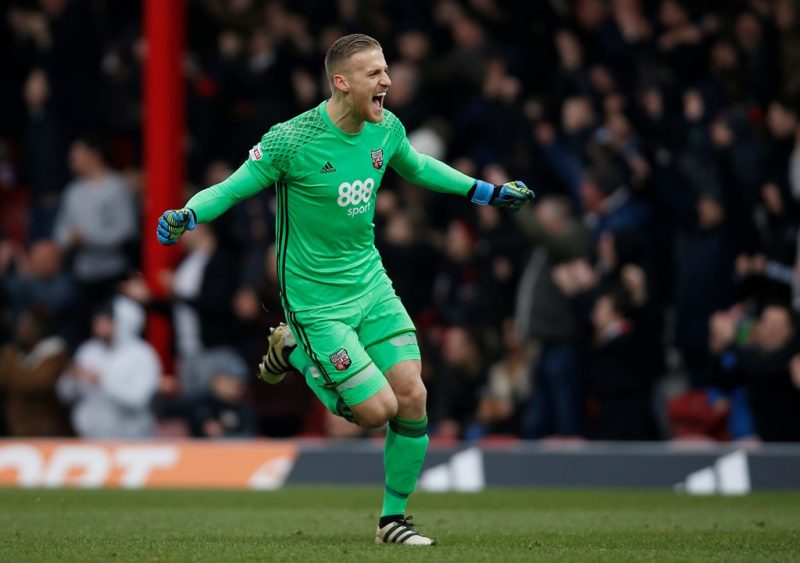 AS A Brentford goalkeeper, you could do worse than emulate David Button – but Daniel Bentley has always wanted to be his own man.

With almost 150 appearances, a promotion from League One and 39 league clean sheets in a three-year spell with Brentford, it’s easy to see why Button’s gloves were so hard to fill following his departure for rivals Fulham last summer.

But Bentley made the move to Griffin Park from Southend and has already clocked up ten clean sheets – just one fewer than Button managed in his first Championship season in west London.

“I knew that Butts was a favourite here and he’d done a very good job, but I didn’t want to be compared to him,” explained the talented stopper.

“I wanted to be my own man, I wanted to come in and stamp my own authority on the shirt.

“I didn’t want to be the next David Button or anything.

“I wanted to be the first Dan Bentley. I wanted to make the shirt my own.

“I wanted to come in and play every game of the season and play as well as possible.

“It’s my first season in the Championship, so it’s been a bit of a learning curve at times.

“I’ve vastly improved and I’m happy with where I am now, but I’m not going to rest on my laurels.

It may only be eight months since he went from being a Shrimper to a Bee, but Bentley has already become a fan favourite in west London.

While goalkeepers are typically thought to reach their peak later than outfield players, the former Arsenal academy product made his 200th professional appearance in last Saturday’s 5-3 win at Burton Albion.

Bentley admits that in a young Brentford squad – where the average age of the side taking on Burton was just 23 – he feels like a wily old head.

“It’s something that three, four or five years ago I would never have dreamed of – getting that many games in such a short period of time.

“In this very young squad, I almost feel like a veteran. I feel like a senior pro, and that’s something I thrive off.”

Bentley has always been a superb shot-stopper but has slowly developed into more of a sweeper-keeper this term – something he acknowledges was a necessity.

“I never really used to pass the ball out, unless there was a player in an acre of space,” said Bentley.

“But then I came here to Brentford, a team that plays ‘total football’ – excuse the cliché.

“You have to learn to use your feet and I always had it in the locker.

“It was just the belief and the confidence to use it in a game in front of thousands of people.

“It took a little while and I’ve not perfected it by any means.

“Sometimes, my decision-making could be better, but it’s one area of my game I’ve massively developed.”