First meets second in the Championship this evening, as league leaders Brighton welcome Newcastle to The Amex in one of the most anticipated fixtures of the season so far.

The game has been long-awaited, after being rescheduled due to both side’s involvement in the FA Cup, and Newcastle wanted the game later in the season because of tough trips to Huddersfield and Reading in the next week, but it goes ahead tonight and promises to be a cracker.

The Seagulls and the Magpies have been battling against each other for top spot for the majority of the season so far, and the outcome of the crunch match on the south coast could be pivotal in the race for automatic promotion.

After a mixed start to the season, which included a 2-0 defeat at Newcastle in August, Chris Hughton’s side have put last season’s disappointment of missing out on promotion behind them, and carried on from where they ended the 2015/16 season.

The Seagulls have claimed an impressive 42 points from a possible 51 at home, and haven’t lost on home soil since Brentford beat them 2-0 in September, a run of 15 games.

Brighton’s unbeaten run has included comfortable wins over Leeds and Norwich, and they brushed aside fellow promotion hopefuls Reading 3-0 on Saturday.

After raising millions from the summer sales of Moussa Sissoko and Gini Wijnaldum, Rafa Benitez invested well with the likes of Dwight Gayle and Matt Ritchie arriving in the North East, and Newcastle were clear favourites for the Championship title.

They have the best away form in the division, with 11 wins on the road, only three defeats and just 10 goals conceded.

Newcastle are unbeaten in eight since tasting defeat against Blackburn on January 4th, but found themselves 2-0 down against struggling Bristol City on Saturday and were eventually held to a frustrating 2-2 draw.

Both teams will most likely be unchanged from the weekend’s action, with neither manager suffering an fresh injury concerns.

Brighton were sweating over the fitness of Belgian left-back Seb Pocognoli after he went off late on against Reading with a thigh strain, but he has been passed fit.

For Newcastle, Dwight Gayle will not be risked for the clash on the south coast due to a hamstring injury that saw him subbed off against Aston Villa a week ago, and miss Saturday’s match against Bristol City. The striker, with 20 goals in 24 games this season, trained over the weekend but will be saved for the weekend trip to Huddersfield. 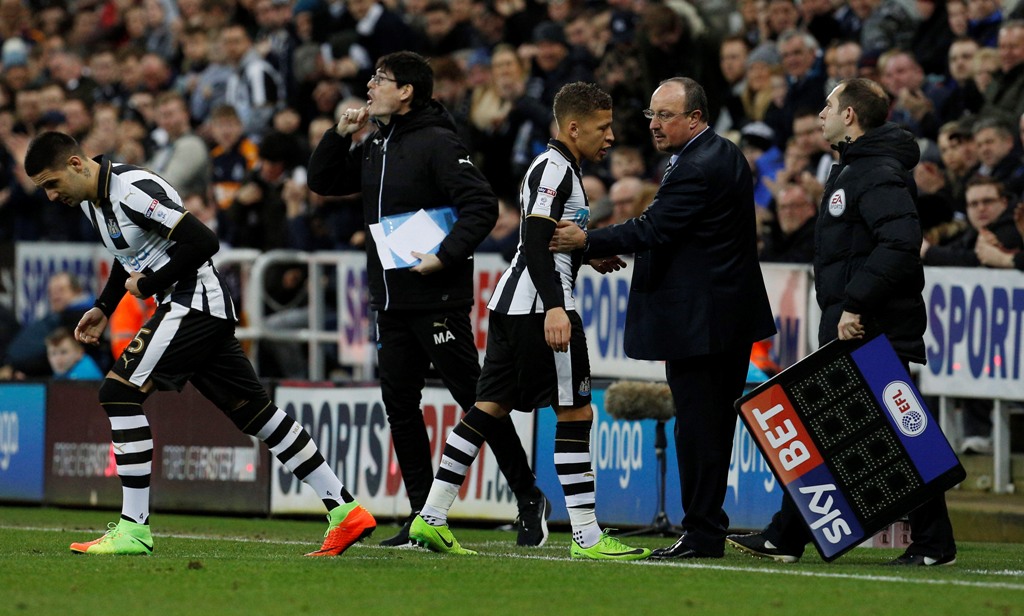 Dwight Gayle, injured against Villa, will be a big miss tonight, but should be fit for the run-in (Picture: Action Images via Reuters)

What the manager said:

“There is no doubt this is a big game because of where we are in the division,” the 58-year-old told Radio Sussex.

“I’ve been asked about pressure but I don’t think Newcastle are under any more pressure than we are. It is the sort of pressure you want, at this end of the table.

“But because of what Newcastle are and the squad they have, their expectations to win the league are greater than ours.”

When asked about his time in charge of the Toon Army, which included leading the team to the Championship title in 2009/10, Hughton said: “Certainly the highlight, yes, because as a manager you want to be able to be part of winning teams, whether that is league, promotion or winning cups.

“So that would have to be. I think the achievement here would be greater, just for where we are as a club.

“Newcastle are an established Premier League club with massive support.

“This is, of course, a club that has never been in the Premier League, so as an achievement I think it would be great.” 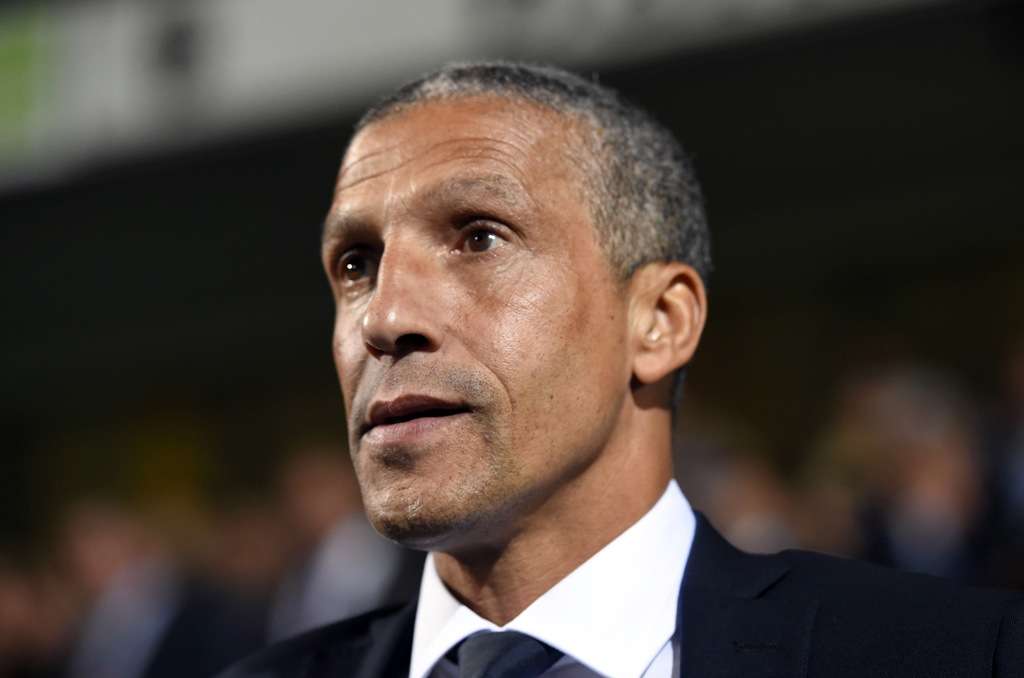 Hughton has masterminded Brighton’s rise to the top of the Championship (Picture: Action Images via Reuters)

“The game at Brighton is important for the message we can send out,” Benitez told BBC Newcastle.

“But I still feel that April will be the crucial month. We have to do well but after we have Huddersfield, Reading and Fulham, and we have to approach every game with the belief we can win.”

When asked if it was now three from two as far as the automatic promotion places are concerned, after Reading’s weekend defeat, Benitez said: “No, no.

“Things can still change. You have 24 points to play for between April and May.

“We still have other games in March after this. There are a lot of points and a long way to go.”

Rafa Benitez and Newcastle will know a lot about Knockaert, with Benitez identifying the dazzling French winger as one of his number one transfer targets in the summer.

However, Brighton resisted the interest, and a rumoured bid in the region of £11 million, to keep hold of the man they signed last January from Standard Liege for just £2 million.

With 11 goals this season, and six assists in his last five games, Knockaert is in brilliant form and one of the league’s best players. 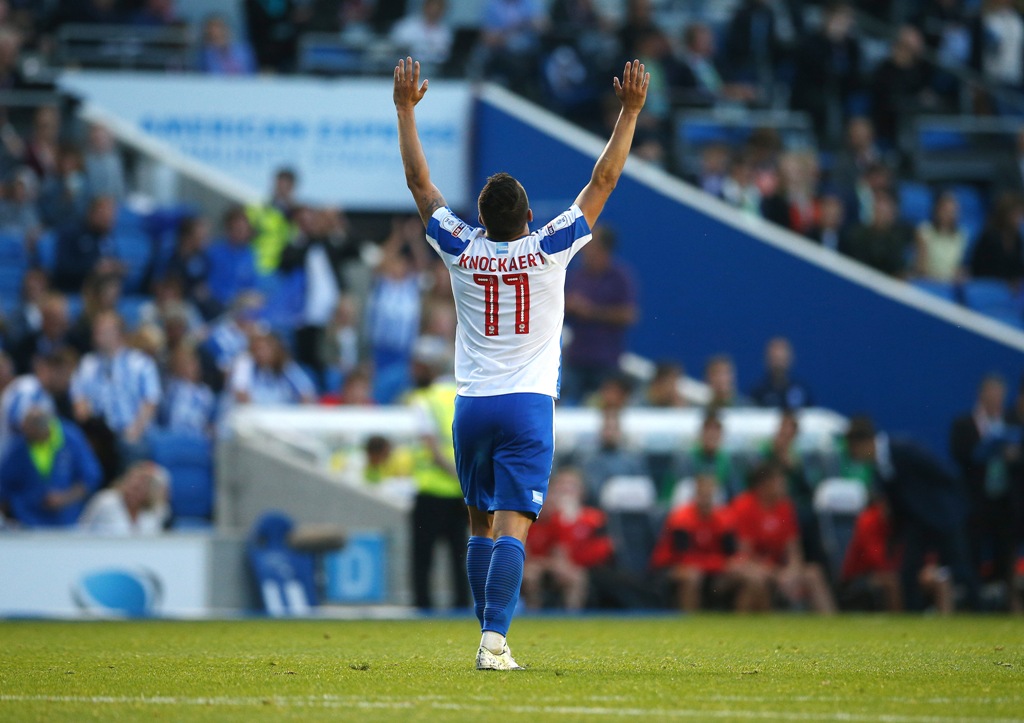 Dwight Gayle is a big loss for Newcastle tonight, but Jonjo Shelvey would have been a bigger loss, and Toon fans will be delighted to see him start in the middle tonight.

Midfield will be a key area in what could be a tight game, so Dale Stephens and Steve Sidwell will have to closely shackle Shelvey, otherwise he will stamp his authority on the game and dictate the pace, and how the Magpies play.

The former Liverpool midfielder has created 64 chances, recorded seven assists and netted four goals in 29 appearances and is certainly the Championship’s outstanding midfielder. 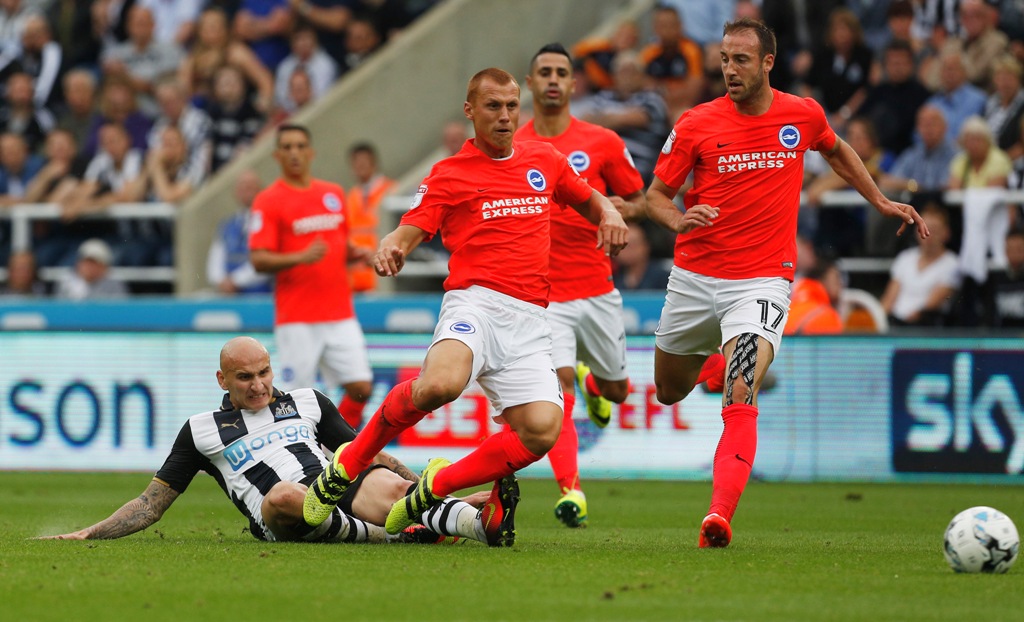 Shelvey scored one of his four goals this season against Brighton with a fabulous free-kick (Picture: Action Images via Reuters)