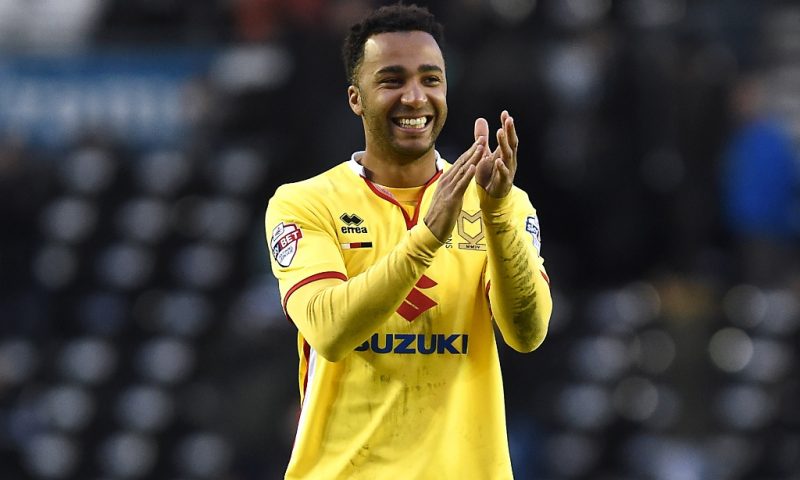 NICKY MAYNARD is desperate to get back to the Championship – and reckons rejuvenated MK Dons can be the side that puts in a late charge to reach the League One play-offs.

A former Bristol City and Cardiff City striker, Maynard is no stranger to the upper echelons. Indeed, he hit 20 Championship goals for Bristol City back in 2009-10.

Yet, when the Dons had notched just 24 points at the halfway stage of this campaign, the reality of a return to the second tier was very much in doubt.

Fast-forward just six games and Robbie Neilson’s side are on the charge, the new manager orchestrating a run of four wins in six prior to the weekend, narrowing the gap to the play-offs to just eight points.

“The lads are very confident at the minute,” said Maynard, 30. “We’ve got a defence that are willing to break their necks to keep a clean sheet, and when you’ve got a squad like that all you need is one chance.

“The gaffer has put in a strategy more to my strengths. I love to play off the shoulder and I’m getting a lot more chances.”

Despite a blitz in which MK ended January with nine goals in two games, Maynard has struggled to match his sharp-shooting exploits of years past.

His superb midweek winner against Oldham was just a second of the season. But, after a long wait to get his 100th career goal against Swindon back in December – more than seven months after hitting No.99 – the 101st was certainly something to write home about.

“A lack of goals doesn’t really affect me,” he said. “I go into each game feeling like I can make chances. If not, then I know I’ll be working my socks off for the team.

“When the gaffer came in, I was the only fit striker available and he wanted to build the players around me. It’s up to us to make the most of that.”

The new arrivals have already proved their worth at stadium:MK, none more so than midfielder Harry Barnes, scoring in the first two games of his loan from Leicester.

And. despite the arrival of Maecky Ngombo, the return of Dean Bowditch from injury and Kieran Agard hitting a rich vein of form, Maynard feels confident of his ability.

“We’ve got a threatening strike force. We’ve got guys who have come in and Dean is just  back from injury, so we’ve got players who can make the difference,” he added.

“If you don’t have any competition, you become laid-back and comfortable, and there are things you always need to work on.”

*This article originally featured in The FLP on Sunday February 12th.