Plymouth plan to to stifle Liverpool again in the FA Cup 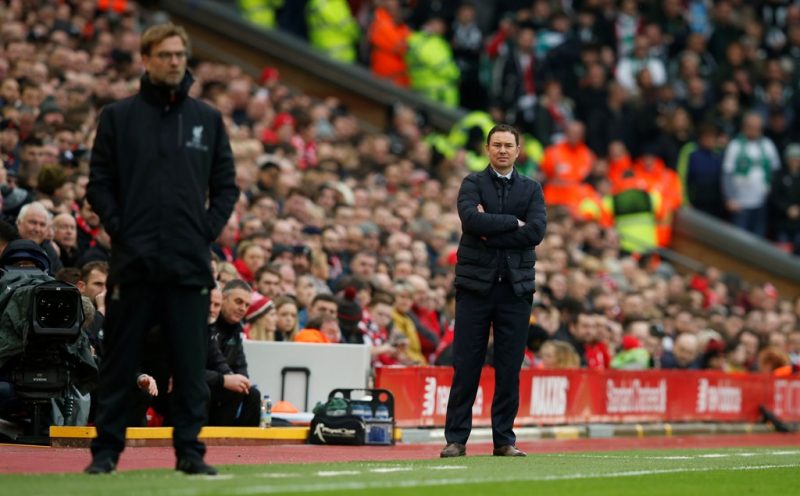 Plymouth boss Derek Adams has said his Plymouth team will stick to the defensive tactics that earned his side a draw against Liverpool in the FA Cup when they take on the Reds in a replay tomorrow.

Adams’ Argyle enjoyed just 23% of possession at Anfield just over a week ago, and only had one shot on target, but their solidity at the back prevented Liverpool’s youngest ever starting XI from creating a break through.

It was a brilliant result for Plymouth and their travelling Green Army, and Adams believes more of the same at Home Park tomorrow is their only way of causing one of the biggest shocks in FA Cup history.

Speaking to Radio Devon, Adams said: “We have to defend very well again.

“I think that we’ve shown in the first game that we can do that, and we’ll have to do exactly the same.

“They’re third in the top flight and we’ve got to be careful of that.”

Plymouth are currently second in League Two, hoping to go one step further than last season when they lost in May’s play-off final against Wimbledon.

Their form will give them belief that against another young Liverpool team, on their home ground, a famous win could be possible, but Adams is very wary of the Premier League giants.

“The Liverpool line-up could change, although I don’t see it changing a lot from the team that played against us.

“I think they might put in a bit more experience in the team, but I can’t see it shifting too much.

“The only difference for them will be that the changing rooms are not as luxurious as Anfield. But the playing surface is excellent, it’s a nice stadium, so I don’t see it being a problem.”

And, if Liverpool do try and spoil the party by taking the lead, Adams has planned for that too, joking: “We’re going to sign (Manchester United’s Marouane) Fellaini and hit it long!”

Tomorrow night could be a memorable one in Plymouth’s history, whatever happens.