Home / Features / Columnists / Big Interview: Ian Holloway – the man who knows how to hold a crowd

Big Interview: Ian Holloway – the man who knows how to hold a crowd 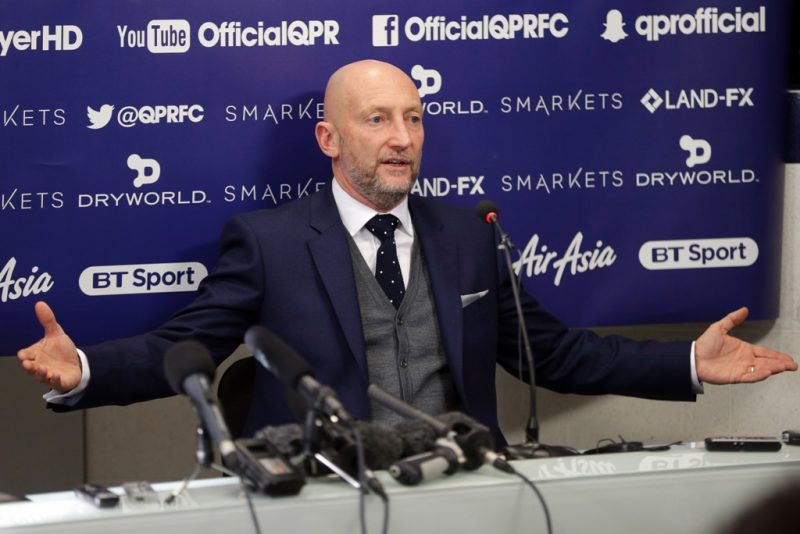 THE thick, heavy door is opened to the Queens Park Rangers media suite, but there’s no-one standing behind it. The press pack continue to wait – and there’s an obvious sign that the man we’re here to see won’t be too much longer.

Silence. Then a bellow comes from down the corridor, an instruction for his wife to “get a wiggle on”.

The twang is unmistakably Bristolian. Ten years on, it’s true what they say: as much as things change, they often remain the same.

Ian Holloway is not only back, he’s back at QPR. Poor Kim. She probably should have guessed, but her husband does like a chat.

His media commitments went on for well over two hours and, despite the regular name checks, you couldn’t blame her for longing for Westfield, just across the way from Loftus Road.

Just when we thought we had lost Ollie to TV, it didn’t take long to remember just what we have missed when he left Millwall in 2015 and signed a three-year contract with Sky to front their EFL coverage.

He always did know how to hold a crowd. He still knows, too, how to bewitch and delight his audience with his bizarre tangents, his Brent-like face pulls and totally unprovoked rants.

He had the FA in his eye-line early on. That impassioned tirade started when he was asked a simple question about the abandonment of the Whole Game Solution.

It didn’t steal the focus. If  Tony Fernandes wanted someone to take the heat off his questionable running of the club, he made a good move. The owner not only has a popular crowd-pleaser to help guide the criticism away from his desk, he’s got one with genuine passion.

After all, nothing beats charisma and a good one-liner to deflect a little attention.

“Why am I back here? I can’t help it I suppose. I’m a busy person, I always have to be in somebody’s life,” Holloway smiled.

“I’ve got every single golf club in my bag here. At my other clubs? A putter and a seven iron. This is the only club I would have walked out on my Sky contract for.

“When I signed a three-year deal there, I said I would see it through to the end even if a club asked me to be their manager. Thankfully, I added in ‘except QPR’.

“Thank goodness I did! I’m a man of my word. I’m just glad I managed to squeeze those words in when I sat down with the producer because I could have been in a whole heap of trouble.

“If it’s all about what a club means to you, then I think you’ve just appointed the right bloke to be honest with you.

“They say never go back but how could I not?  This is my club and you don’t say no to your club. I had the best days of my footballing life here.”

And his worst. Not long after he was given his managerial chance, the club were plunged into financial chaos.

“We were the first big club to have the word administration thrown at it,” the 53-year-old former Blackpool and Plymouth boss said.

“I did it once, now I want to try again. I want to do it with people who care and not just pick up their money.

“To have another chance now when we are in this situation was something I have dreamed of. There is no such thing as a perfect job for anyone, but this comes pretty close, don’t you think?

“I have seen dreams and hoped crushed. I will never forget seeing that and doing that to people, having to sack people and tell them it would be all right. That time wasn’t easy for anyone. That’s why I wanted another go at it.”

At QPR, they don’t do things the easy way.

The change of tact from Fernandes’ over-spending, chasing the Premier League pound, has left the club flagging. Not that Holloway sees Rangers as a basket case right now.

“A lot of work has gone into repairing the mistakes of trying to buy success,” he said. “Hopefully, I can make them play so well their money is irrelevant.

“Nothing would make me prouder than getting this club back into the Premier League. I know we will do it, it’s just when.

“I would be stupid to say this year or next year. I know what I want to do, but I admit I don’t know exactly how long it will take. This season I want to give the players some TLC, a lot of love. We’ll see what that brings.”

Administration wasn’t the only issue he faced. He doesn’t forget and there’s more he wants to put right.

“When we lost here to Cardiff 4-0, some lady threw me her season ticket,” recalled Holloway, who said they “just didn’t get him” at Millwall, his last job in management.

“I can’t repeat what she said. After being on Sky, I no longer swear. True story that. But it was the last game of the season and she threw me her season ticket. They’re clever like that around here!

“Then there was Peterborough away and we lost 4-1. What hurt wasn’t just the result or the performance.

“It was their fans singing ‘you’re not famous any more’. That really got to me.

“It got to me because it was my club. My club, not famous any more? I didn’t like that one bit.

“I wasn’t the most talented player, but I had good habits and I want to get some good habits into these players.

“I know how hard it is to keep hold of your job in this league, but I set Arsene Wenger as my target. Give me another 20 years here – that’ll keep me happy!”