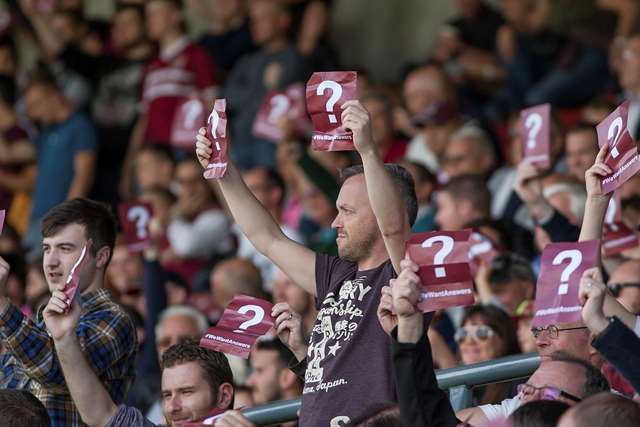 Northampton Town still face liquidation but are on the path to prevent that happening after chief executive James Whiting revealed that a takeover deal had been agreed on Monday night.

The League Two side are the subject of a winding-up petition submitted by HMRC and chairman David Cardoza has struck a deal with former Oxford United chairman Kelvin Thomas that will see the club sold, according to Whiting.

The sticking point for the takeover to be completed has proved to be the club’s £10.25m loan that has yet to be repaid to Northampton Borough Council, who await talks with Kelvin Thomas in order to establish a deal that satisfies both parties.

Somehow, amidst boardroom turmoil, the players and coaching staff have managed to fire Northampton into the play-off places and Whiting was immediate in expressing his gratitude for their efforts.

Speaking in front of a number of NTFC Supporters’ Trust members he said: “I would like to thank the players and staff for their continued professionalism and dedication in really difficult circumstances.

“Thanks are also due to the supporters for their loyalty and to all those fundraisers, volunteers and well-wishers who are all fighting for Northampton Town Football Club and we hope to have some confirmed, positive news regarding the future of the club and new ownership soon.”

On such hopes concerning the sale of the club, Whiting said: “A deal has been agreed for Kelvin Thomas to buy the club from David Cardoza, subject to talks with Northampton Borough Council over the outstanding £10.25 million loan. If those talks go well and things get agreed, we should be able to move forward as a matter of urgency.”

Urgency looks to be a common theme needed at Sixfields as Whiting also confirmed that the players’ and staff’s wages are, “likely to be paid late this month.”