Posted on February 16, 2015 by admin in Featured, Skybet Championship | 0 Comments 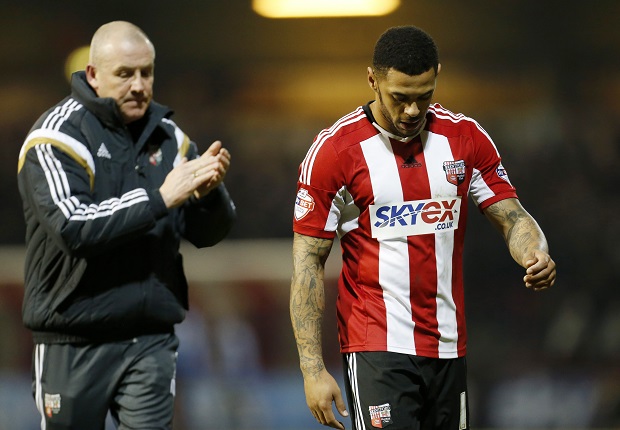 ANDRE GRAY has leapt to the defence of Brentford manager Mark Warburton – and says the players are in full agreement that he is the man to take them to the Premier League.

Reports this week surfaced that the Griffin Park boss is at loggerheads with the board, following an article in The Times which stated that owner Matthew Benham wants to restructure the west London club.

Punching well above their weight, Warburton has guided the Bees into the Championship’s top six after winning promotion from League One last term and fans are furious with suggestions that Rayo Vallecano coach Paco Jemez has already been earmarked as his replacement.

Warburton, 52, is on a 12-month rolling contract and The Football League Paper understands Scottish giants Glasgow Rangers are giving consideration to making a move for him should they not make caretaker-boss Kenny McDowall Ally McCoist’s full-time successor. Former Rangers favourite David Weir is Brentford’s assistant manager.

The Bees issued a strange statement in response to the newspaper reports, which failed to clear up Warburton’s longterm future, and added more fuel to the fire by saying: “Given Mark’s increasing profile within the game, we recognise that he will deservedly have turned the heads of other clubs.”

But striker Gray believes the club cannot make a change. “It’s as simple as this – the players all want him to stay,” he said.

“There are a lot of rumours going around at the moment and what’s behind it nobody really knows.

“He’s told the boys to keep doing it for ourselves and not worry about what’s going on behind the scenes. We’re a tight group here, we all do it for the gaffer anyway.

“We can’t let anyone or anything stop what we’re doing. The speculation is out of our control.

“He has brought my game on massively and I couldn’t be more grateful to him. We want him to stay here, the whole team do.

“The celebration on Tuesday night after my goal showed that and the fans feel it as well. That moment proved how much he means to us all. Everyone.”

And despite ten-man Brentford’s late heartache against Watford on Tuesday night, the brave Bees ultimately going down 2-1, Gray refuses to give up on automatic promotion.

He added: “Is it play-offs? No. Why not the top two? We are only a few wins away and we have a lot of the sides up there to play nobody is going to win every game. Anything can happen.

“I’m really loving being a part of a promotion race for a second season running. It’s a massive jump for me but I’m enjoying it. We managed to get the job done at Luton last year so hopefully there’ll be a similar outcome here.”