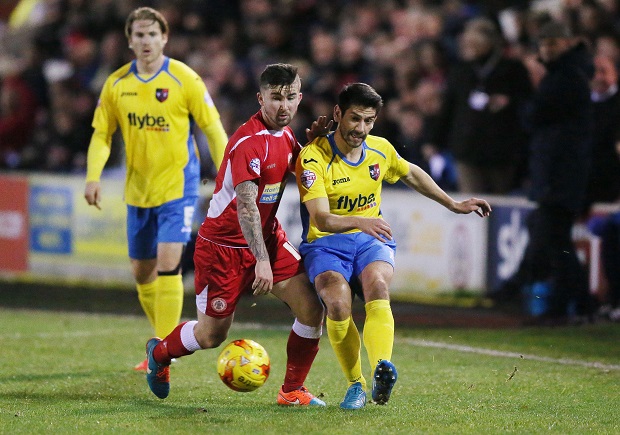 POINTS mean promotion and Danny Butterfield hopes Exeter City’s ability to successfully master the generation game can take them all the way to League One.

Teenagers Christy Pym and Matt Grimes – before his record switch to Swansea – had drawn much of the plaudits as the club went from the bottom of League Two to the play-off mix, despite financial uncertainty still looming large at St James Park.

However, it is an unlikely centre-back pairing – with a combined age of 72 – playing an equal part in Exeter’s relative recent success.

For the last two months Butterfield has lined up alongside 37-year-old former Southampton midfielder Matt Oakley at the heart of the defence, helping the Grecians put together a ninegame unbeaten league run between October and December, though that form curtailed over the festive period.

And Butterfield believes the mix of youth and experience manager Paul Tisdale has blended together – with 35-year-old striker Clinton Morrison also at the club – can prove to be a recipe for success.

The former Crystal Palace utility man said: “Myself and Clinton are a bit different to Matt in the dressing room, in terms of being loud and jovial. It keeps us young.

“But we know we lead by example and, like Matt, there’s a time when you need to embrace that responsibility of being one of the senior figures, so I think we’ve got a good mix in there.

“Early on in the season we had a number of injuries and the performances suffered. We tried two or three formations, but we’ve now got people playing in their preferred positions, we’ve found a system that suits us and we’re feeling very confident and comfortable.

“Through pre-season we jiggled about with playing three at the back, either with me in the centre carrying the ball into midfield or Matt Oakley doing that, but we never expected to be playing there together.

“We’re still both learning the position, but I think it’s working well. We’re both experienced enough to adapt and I’ve enjoyed it. Matt has a great calmness about his play, so I think we complement each other.

“Promotion is what we have set out as a group to achieve. We don’t look too far ahead, because in general we have got a young squad and we know how quickly things can change. But if we can stay in this kind of form, then why not?”

Exeter announced last month they no longer require a loan from the Professional Footballers’ Association to assist with cash-flow concerns.

And the £1.75m sale of prized asset Grimes has boosted the coffers. Butterfield admits that it was a wrench to lose their 19-year-old midfield star, but safeguarding the club’s future must come first.

“If you sell a player like that it can help not just with investing in the squad, but also the whole structure of the football club and make it safe for the future,” he added.

“Matt Grimes has got a great future, but he’s not the only one at the club I’d expect to go on to bigger things. Scot Bennett, Tom Nicholls, David Wheeler, for example, have great quality as well.

“Tis is very good at getting the best out of individuals to benefit the team and he deserves a lot of credit for that.”