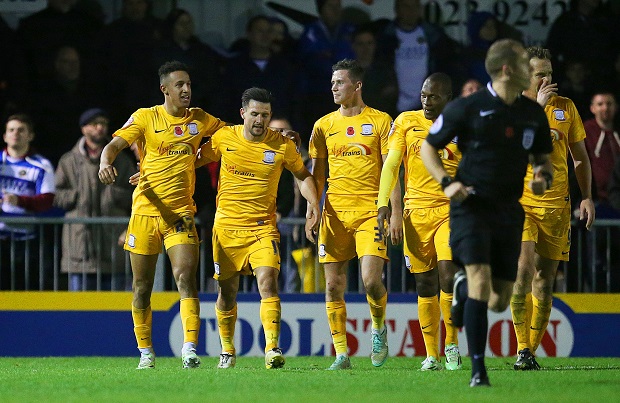 So dry is the barren spell at the Premier League club that they had to cancel their Goal of the Month competition for October with not one of their misfiring players finding the target. Well that’s not entirely accurate. One of their big striking prospects was on the scoresheet… somebody else’s!

After opening his account against Leyton Orient last month in League One, 19-year-old Robinson scored a hat-trick for Preston in their 3-0 FA Cup triumph at Vanarama Conference South side Havant & Waterlooville on Monday night.

The striker says he’s having the time of his life in Lancashire and although he has to do as he’s told, he would rather continue to develop at Deepdale.

He said: “I am absolutely loving it at Preston, it’s been such a great experience for me.

“They’ve let me express myself, which is what I needed. I’m here until January 3 as things stand but I have to see what happens between the clubs – if Preston still want me, or if Villa need me back.

“I would like to stay for the season and if Villa don’t want me back around the first team I would love to stay on. I’m obviously their player but I want to keep playing and hopefully keep scoring.

“Aston Villa aren’t getting goals at the moment but they are such a strong set of lads and brilliant players, it will come good there. I know they’ll be back up the league soon so hopefully they allow me to carry on here and I can be part of Preston’s season.

“We need to get first position in League One. I definitely think we can, 100 per cent. We’ve lost a few games recently but there’s still every chance of catching Bristol City. We have the quality there, no doubt about it.”

Robinson is clearly making an impact, earning the respect of veteran striker Kevin Davies, the former Bolton Wanderers hero allowing a player at the other end of his career to take his big moment.

Davies, 37, is Preston’s regular penalty taker and if he had scored Monday’s 81st minute spot-kick it would have been his 150th career goal.

“I didn’t realise!” added Robinson. “I was on a hat-trick – my first senior one – and he was so great and said I could take it to get the match ball.

“I thanked him at the time and I’ll make a point of thanking him again, especially as I now know it would have been a massive moment for him.”