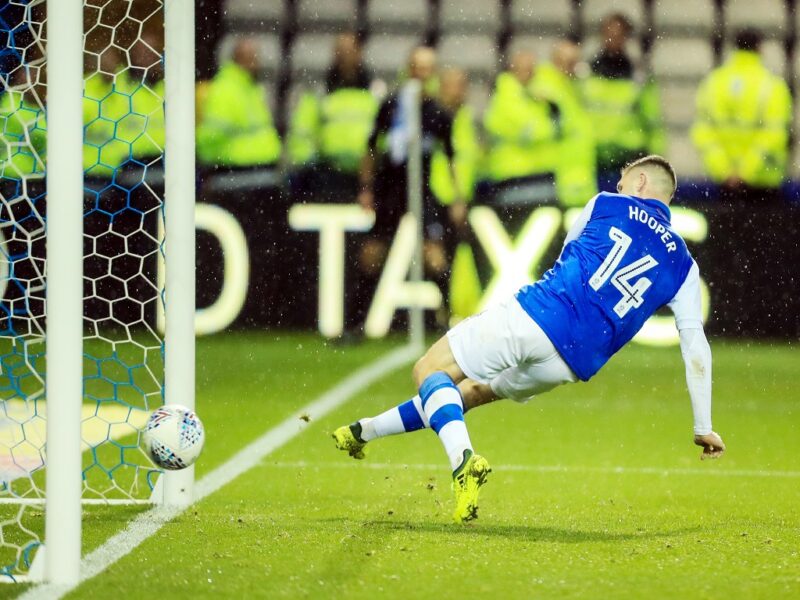 Proof that nobody is immune to football’s ruthless streak came this week with the news that Danny Simpson is on trial at West Bromwich Albion.

A Premier League winner with Leicester just three years ago, the full-back was released by the Foxes in May and has spent the entire summer trying ­– and failing – to find a new club.

Now top-flight squads are full and, like thousands of other footballers, the 32-year-old has been forced to lower his sights, cut his wage demands and alter his expectations.

Equally, EFL clubs with holes in their squads and four months to wait until the January window can pick up a quality player on the cheap.

And Simpson isn’t the only one. Here are five players without clubs who will surely be tempting managers across the EFL.

That Hooper is a striker of fearsome prowess is not in doubt. In three years at Sheffield Wednesday, the former Celtic forward scored 30 goals in 81 matches.

Combined with previous spells at Norwich City and Scunthorpe, he has netted in the Championship once every 2.8 games. The Owls invariably looked a better side for his crafty link play, and it is no coincidence that they twice made the top six when Hooper was fit.

Fitness, though, has been a big problem. Hooper has played just six times since December 2017, when a seemingly innocuous calf strain morphed into a variety of issues and, eventually, major groin surgery.

Throw in a reported wage of £40,000 a week and you can see why Wednesday – plus a host of potential suitors, including Nottingham Forest – baulked at offering a contract. Yet if Hooper can stay fit and lower his demands, he’s one hell of a player.

Hailed as a coup when Norwich City snatched him from Wolves in the summer of 2018, Marshall’s time at Carrow Road was a  disaster.

Unable to dislodge Emi Buendia or Onel Hernandez from the wide positions, he made just two league starts and in January bailed out for a spell on loan at Millwall.

There too he failed to recapture the sparkling form of a previous stint at The Den, which had yielded three goals and five assists in just 16 games at the end of 2017-18.

Norwich eventually cancelled the remainder of Marshall’s four-year contract, freeing him up to find a new club. So far, however, there have been no takers. Why?

Marshall thrives as an orthodox winger. In the Championship, at least, few are better at the simple art of dropping a shoulder and crossing the ball. Yet neither Wolves nor Norwich had any real need for such a player, and the trend  is against four-man midfields.  Wage demands could also be a sticking point.

At the right price, however, it is hard to see many Championship clubs who wouldn’t benefit from a player in his prime with a proven record at that level.

The strange thing about Clayton is that nobody – not even the player himself – knows how good he is.

At 15, Clayton was the subject of a £1m bid from Liverpool. At 16, he was in Crewe’s first team and by 18 had netted in a Wembley final. Yet since breaking his ankle in 2013 aged 19, the striker has barely been off the treatment table.

Cruciate ligament reconstruction, pulls and strains, endless hamstring issues. At one stage, he even spent months playing with his hamstring tendons hanging off the bone, unaware that a surgery had gone awry.

Since leaving Crewe to join Bolton for £300,000 in September 2014, he has played just 29 times; in the same period, Harry Kane has broken into the Tottenham team, scored 125 Premier League goals, won 41 England caps and become one the world’s best strikers.

Now 25, Clayton insists he is fully fit. The question is, does anybody believe him enough to risk it?

A contemporary of Phil Foden and Jadon Sancho, Buckley-Ricketts was touted a star of the future when he made a £500,000 switch from Manchester City to Peterborough in the summer of 2018.

“He’s under no pressure to perform now and is one we want to develop,” said erstwhile Posh boss Steve Evans of the jet-propelled wideman.

Clearly, however, things didn’t develop as planned. Buckley-Richards made just two appearances and, after spending the summer in search of a buyer, Peterborough cancelled his contract.

Having thrived in England age groups but struggled at club level (loans to Twente and Oxford also underwhelmed), the feeling at London Road was that Buckley-Ricketts lacks the physicality to flourish in lower-league football. Failed trials at Southend and Carlisle suggests those concerns were not groundless.

Yet muscles can be built, and confidence too. Ricketts has the ability. His problem is that few sides in League One and Two have space for passengers. Just ask Posh.

It is hard to believe that a player once offered a five-year deal by Real Madrid is a free agent after being released by Brentford.

Yet that is the latest ignominy to befall Josh McEachran, a man whose star has faded faster than a cheap shirt left on the washing line.

So stylish and composed was McEachran as a teenage playmaker at Chelsea that Spain’s finest scouts were accompanied by plaudits and hyperbole. Trevor Brooking famously called him the
future of England’s midfield.

McEachran, though, never lived up to the hype. Released after several dismal loans, he pitched up at Brentford in 2015 but never cemented a regular spot and didn’t score a senior goal until last year.

Now on trial at Birmingham after being released in July, McEachran is fighting to save a career that once looked set to go stellar.