2017/18 review: The Championship winners for the PFA Bristol Street Motors Fans’ Player of the Month awards 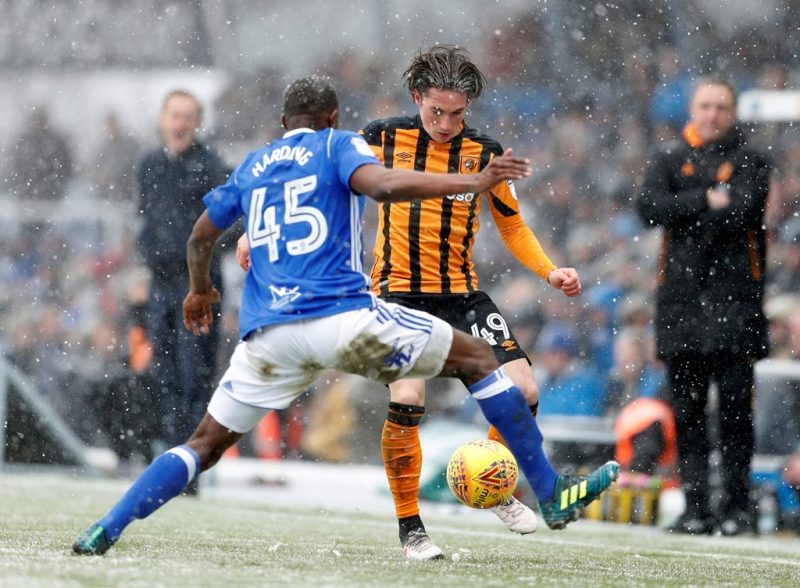 The 2017/18 Championship season proved a typically competitive one as Wolves ended up the cream of the crop playing some scintillating football under Nuno Santo. Meanwhile, down at the bottom, it would be Burton Albion, Sunderland and Barnsley to get relegated after tough campaigns respectively.

On an individual basis, too, there were some dramatic and enthralling moments as the likes of Ryan Sessegnon, Aleksandar Mitrovic and Adama Traore all shone throughout the campaign. This would lead them – and many others – to be nominated for the Bristol Motors Fans’ Player of the Month awards last season, in nationwide polls carried out by fan engagement experts Snack Media.

And, with the new Championship campaign looming large on the horizon now, what better way to whet your appetite for 2018/19 than taking a recap of what went on last season as we look at who won what…

The shared August and September award fell to Diogo Jota who immediately underlined that he could adapt to the Championship and English game. Wolves made some big signings last summer and Jota proved one of the best with a hatful of goals coming during the early part of the season. It would set Wolves on their way to the title as Jota formed part of an early attacking trio that would dominate the first part of the year.

Bonatini’s campaign was a real two-sided coin with the first half excellent and the second half not as much. In the first few months, though, he was unplayable and October’s award reflected that as he rightly picked up the gong. He scored five goals in the month and amassed a whopping 56% of the vote leaving the rest of the nominees in his wake. Wolves and Bonatini were in full flow already but only the former would keep it up for the whole campaign.

Wolves’ scintillating run continued and the men from Molineux by this point were already looking very hard to stop in the second tier. Indeed, their attacking trio in the early months of the campaign was proving devastating and here the final member of the three – Cavaleiro – took the gong. The wide-man hit the net four times during November as he pipped fellow winger Albert Adomah to the award with 24% to 21% of the vote.

2017/18 would prove a season to forget for Leeds United but at the turn of the year – despite inconsistencies – they were well in with a chance of getting into the top six come May. A strong December allowed them to keep pace with those above them and Pontus Jansson shone during the month with a string of typically powerful displays. The Swede himself didn’t have a great campaign but here he showed what he could do when on top form.

The boy wonder had to pick up a monthly award at some point during the campaign and January proved to be the time for Sessegnon to get a gong – though it wouldn’t be his last award in the season. The young Englishman would play further forward last campaign under Slavisa Jokanovic and at the turn of the year we saw that come to real fruition. Sessegnon scored six goals during the month of January – beating fellow whizzkid James Maddison in the vote. 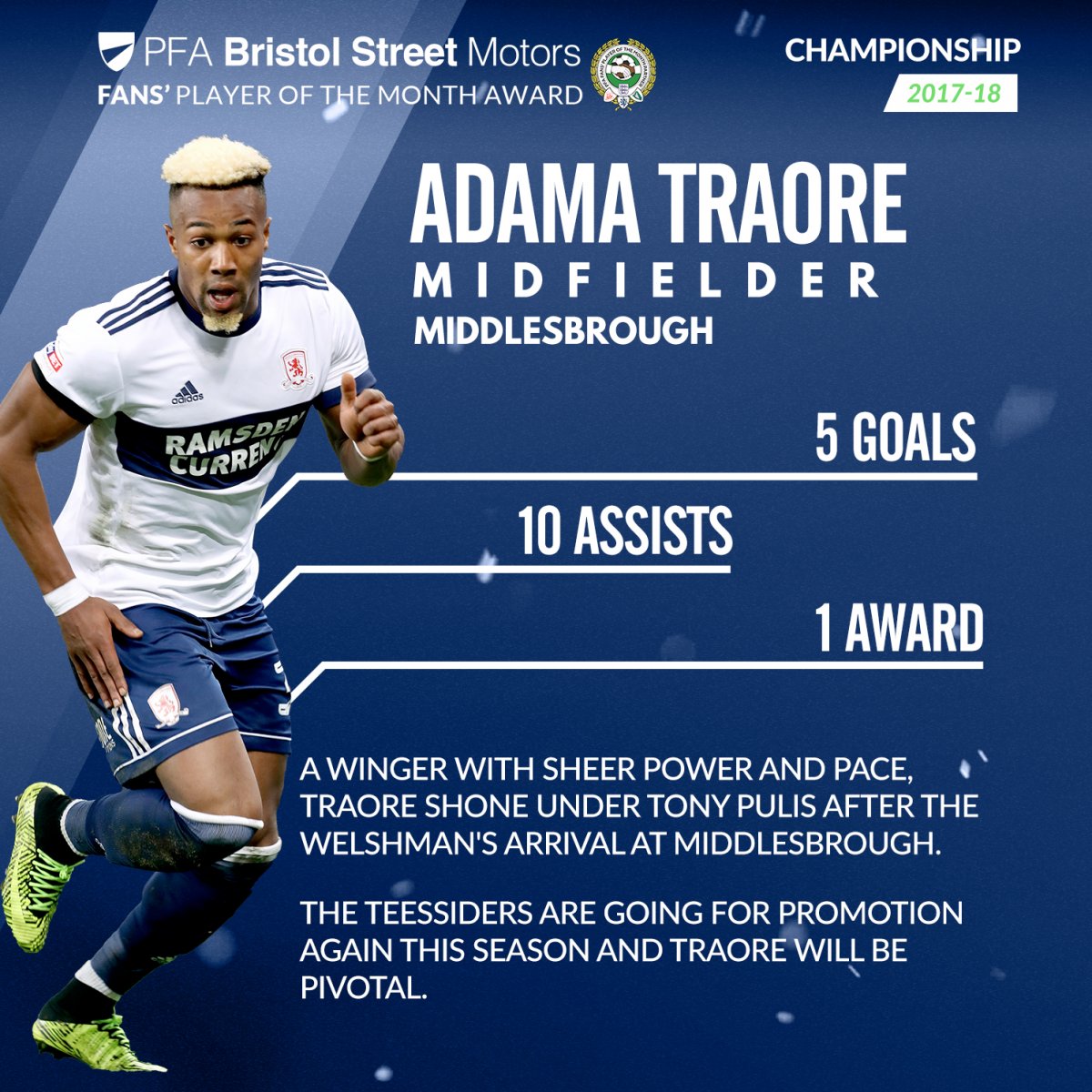 February proved to be a fine month for Adama Traore who stormed the fan vote with 31% of the poll going his way. A player of immense talent and power, Traore really kicked up a gear under Tony Pulis’ guidance and in February we saw him at his very best. His ability to dribble past players more than anyone else in the league and pick up fouls was on full show as Boro continued to challenge for the top six spots in the second tier.

March saw a Fulham side in full-swing and Aleksandar Mitrovic was at the very tip of the attack. The Lilywhites went on a long unbeaten run from the start of 2018 and the Serbian’s loan arrival was proving pivotal as regards to that. In March he tore defences apart with his powerful number 9 displays and scored five goals as the Cottagers strengthened their play-off and, indeed, promotion credentials.

By April we were beginning to learn who’d be where come the end of the campaign and it was evident that Hull City were going to be safe from relegation. Fantastic in attack but leaky at the back, the Tigers were inconsistent to say the least last season. One man who shone, though, was Harry Wilson on loan as he repeatedly drove in from the left-hand side to lash home and provide assists. For this year, he joins Derby on loan from Liverpool and will be one to keep an eye on. 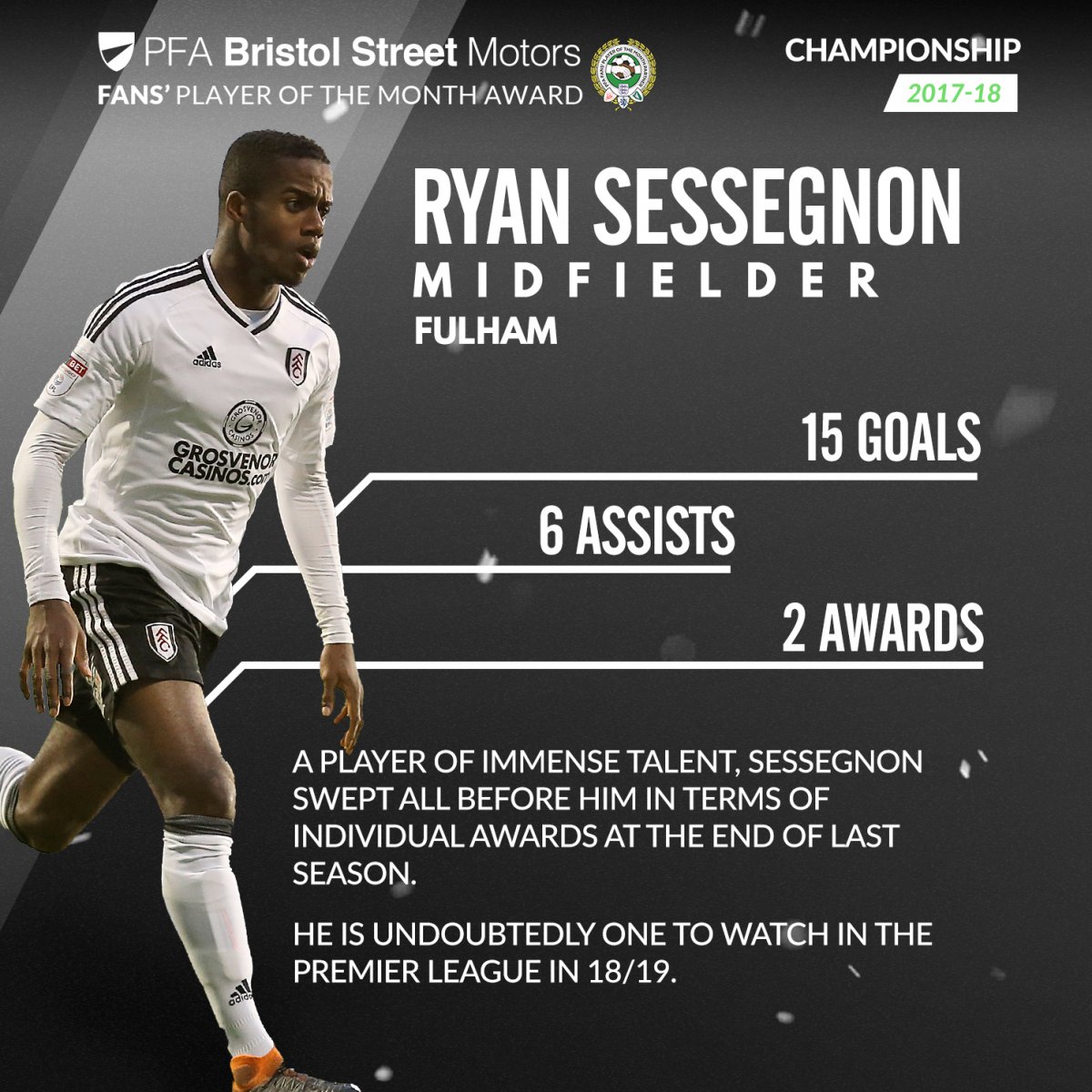 Player of the Season – Ryan Sessegnon

He won pretty much everything else on offer in terms of individual awards last season and so it made sense that Sessegnon would pick up the PFA Fans’ Player of the Year award for 2017/18, too. Fulham boss Slavisa Jokanovic had seen his decision to play the teenager further forward come off in fine style over the previous months as he hit double figures goals-wise in the Championship. A winner of the monthly award in January, Sessegnon’s displays belied his years and he’ll be eager to emulate his success in his first Premier League campaign this time around.

Remember to vote in the 2018/19 Bristol Street Motors PFA Awards when they kick-off again in September. Visit https://www.footballfancast.com/pfa-awards