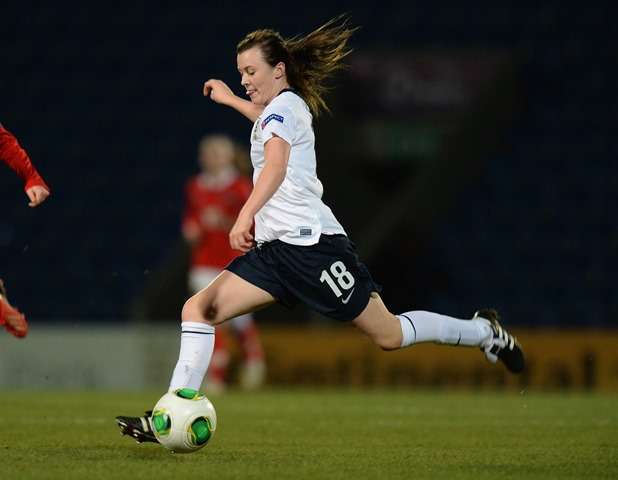 At just 16, Ellie Wilkinson was living her dream as she stepped out for Manchester City and established herself as a regular in the England U17 squad.

But, two years ago, her world was turned upside down when she was diagnosed with a life-threatening disease.

It was just before the European Championships in 2013 that Ellie knew something wasn’t right but she blamed it on a lack of fitness.

“I remember I had a game for Man City against Notts County and I just could not play,” she told Women’s Football Weekly.

“My legs wouldn’t let me and I just cried. We were going away with England the next day and I just knew something was wrong. Before that, I’d put it down to lack of fitness and went on extra runs.

“If I hadn’t put my body through that, I might never have picked up what was wrong and neither would the doctors. In every way, football saved my life.”

After visiting a specialist, Ellie was diagnosed with dyskeratosis – a rare blood disorder which causes bone marrow failure – and was immediately put on the list for a donor.

If left untreated it would have destroyed her immune system and organs.

Luckily, a perfect match was found, but that was only part of the battle for the young striker.

She then contracted meningitis and was in hospital for a month. Ellie said: “Due to risk of infection, only my immediate family could visit me. It was a really tough time but the main thing is I got a donor, which is never a guarantee.

“Of course I had my dark days but from the start I was always going to get back to playing football.”

Doctors are astounded by the quick progress she has made since the transplant a year ago.

“Everyone keeps saying to me how quickly I have recovered but all I can say is that is again due to my football,” she said.

“Before my transplant I had a million checks on everything and all my other organs were unbelievably fit and healthy.

“As soon as I felt better, I rang Man City and they invited me back to training.

“I was worried about being behind, but I have been training with the England girls recently. Toni Duggan and Izzy Christiansen are some of the best players about and to be able to get my fitness back with them is truly incredible.”

Ellie’s positive attitude is coupled with a clear determination to succeed and become one of the Lionesses once again.

Since her illness, she has seen the women’s game explode and wants more than anything to be a part of that.

“I was nervous at first but what better way to get back into training than throwing yourself in at the deep end,” she added.

“I feel way better than I did before. I couldn’t concentrate on the game, due to being in so much pain. Now, the women’s game has grown and I am feeling well. I just have to go for monthly check-ups but it’s a small price to pay.

“A couple of clubs have been in touch, so who knows where I will end up but I am just grateful to be back in the game. I just want some playing time.

“By next year I am going to be in the England squad.”