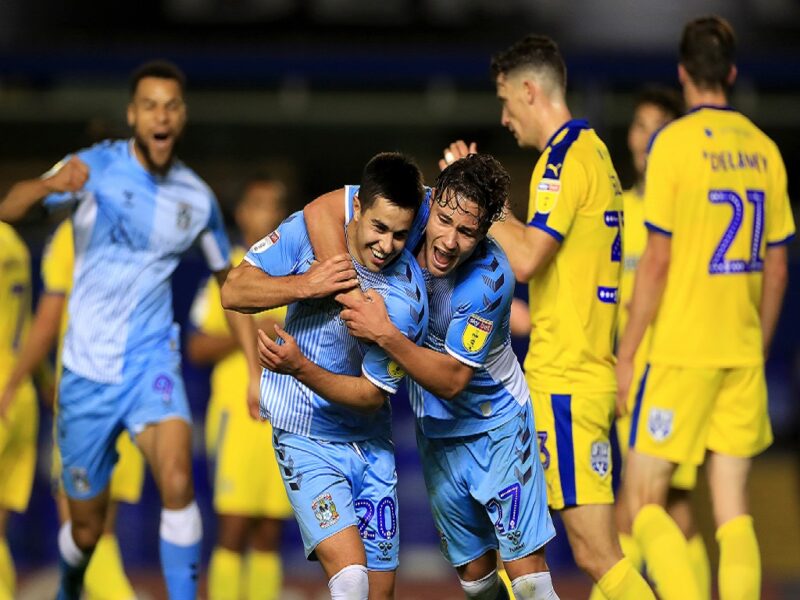 Coventry City midfielder Liam Walsh was delighted with his injury- time winner against AFC Wimbledon in League One last night.

It was the 22-year-old’s first goal since joining Coventry on loan from Championship club Bristol City in the summer.

Walsh’s 93rd minute strike keeps the Sky Blues top of League One, one point ahead of Ipswich Town.

“I was lucky I scored,” Walsh joked.

“I kicked the floor when I hit it. I just hoped it was on target.”

“I wanted to run towards the fans, but one of the lads whipped my ankles up and I went flying face first! There’s no better feeling than a last minute winner.”

Walsh is under no illusions about his side’s performance as Coventry struggled to break down the AFC Wimbledon defence for much of the match.

“We felt with the way we played, we didn’t deserve to come away with three points,” Walsh explained.

“Like the Blackpool game, we started a bit sloppy.”

It was the second home game in a row that Mark Robins’ side had to come from behind having conceded 57 seconds into the match against Blackpool two weeks ago.

Despite this Robins was pleased with the way his side reacted to a disjointed first half display.

“In the second half we started brightly, we almost scored with our first attack and then we tried to get ourselves on top,” Robins said.

“We were on top to a degree, their chances came from our mistakes, but I’ve got to accept that and we know where we need to improve.”

Coventry don’t have a League One fixture this weekend following Bury’s expulsion from the EFL and could relinquish top spot to Ipswich Town or Wycombe Wanderers.

Ipswich travel to Gillingham, while Wycombe host out of form Portsmouth at Adams Park.

Coventry’s next match is against Doncaster Rovers in ten days’ time at St Andrew’s.