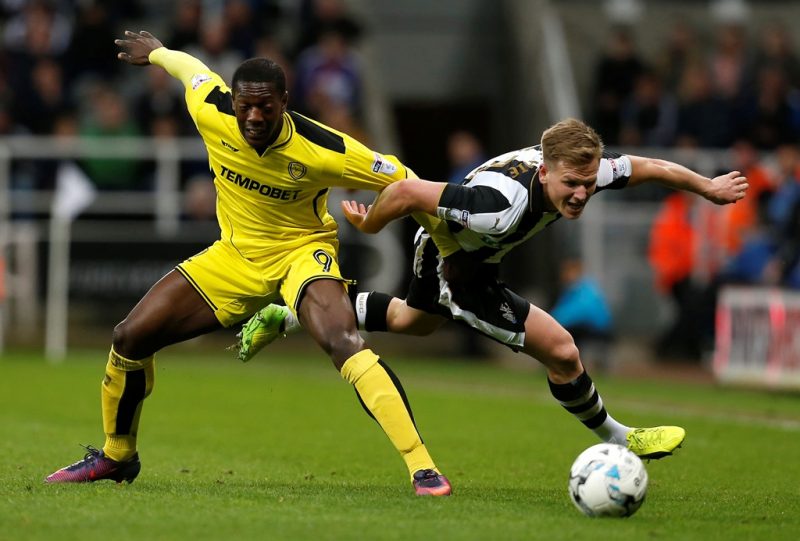 Burton Albion striker Marvin Sordell has signed a three-year contract at the club after a successful short-term stint last season.

The 26-year-old striker initially joined the Brewers in January until the end of the campaign from League One strugglers Coventry, but impressed enough to secure a a lengthier deal.

As Nigel Clough’s men defied the odds to stay in the Championship, Sordell thrived up front, scoring four times, including a goal against Leeds that all but ended their hopes of a play-off place.

Speaking to Burton’s official website, the former Watford and Bolton striker said: “I’m delighted to have that security.

“I scored a few goals and helped the team stay up and that was a fantastic achievement for everyone at the club and hopefully we can kick on from that now as well.

“It will be good now to get a full pre-season and start the new season quite strongly which will be very helpful for us as well.

“The minimum we want to achieve is to stay up again but we want to be improving and pushing on as much as possible.”

After captain John Mousinho extended his stay at the club yesterday, signing a new one-year contract, Clough is beginning to build his squad ahead of next season, which could prove to be even more challenging.

The three-year deal for Sordell however is another sign of a successful summer ahead, and the boss said: “The second half of the season, he was a major reason in us staying up.

“The quality and consistency of his performances was excellent. We hope he will take it on again next season. He made a big impact when he came in in January so were delight he will be with us for a few more seasons.

“When he’s played in that league above in the Premier League we think he’s got the confidence in his ability and we’ve certainly got it.

Hopefully he will get a few more goals for us and have another good season. His versatility as well as the fact that he can play down the right-hand side like he did for us a number of times.”