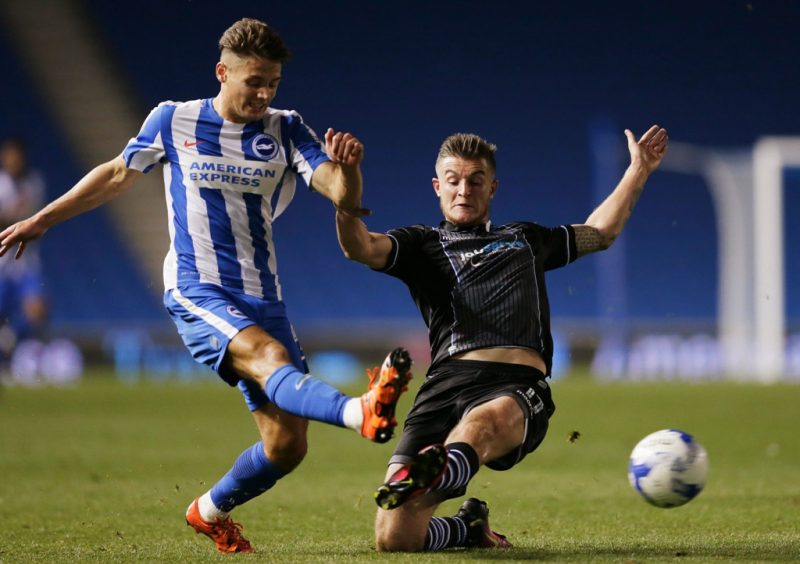 Young Brighton & Hove Albion defender Rob Hunt is loving life on loan at Oldham as the Latics battle to stay in League One.

The 21-year-old right-back emerged from the Albion’s development squad earlier this season, and made his full debut as a late substitute against Burton in September, but was sent out on loan to gain some more priceless first-team experience.

Since joining Oldham in January, Hunt has gone on to make 10 appearances for John Sheridan’s side, and the results of the Latics have improved vastly since the new boss, and Hunt, have arrived.

With just one defeat in their last 10 games, Oldham are up to 18th in the third tier, and Hunt told Brighton’s official website: “I’ve grown up in football terms over the last few weeks. I’ve matured as both a player and person. I try to go forward, but we are in a relegation battle, so it’s about a clean sheet first and foremost.

“From what I’ve seen and the games I’ve played, the team should never have been where we are in the league.

“We’ve done quite well as a team in all of the games I’ve played.

“This isn’t a relegation team. It hasn’t been that sort of atmosphere. Everyone is very upbeat and looking forward to the next game.”

Oldham’s fight to preserve their place in League One is a far-cry from Brighton, where the Seagulls are chasing promotion to the Premier League, but Hunt is enjoying every minute of his time up north.

With the campaign nearing its conclusion, the youngster is focused solely on the Latics, for the time-being at least, saying: “I’m concentrating on the last eight games here and trying to keep the club in League One.

“I’ve got more experience here. Every game and every situation is different.

“I’ve got one more year on my Brighton contract. I’ll get a bit of time off in the summer and then come back for pre-season.”