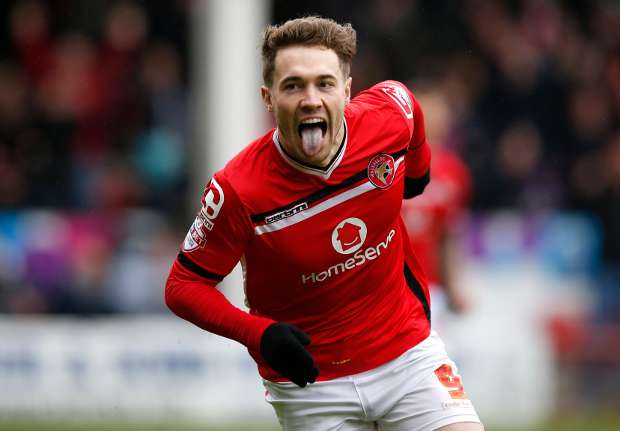 BARNSLEY have snapped up much sought-after Walsall striker Tom Bradhsaw for an undisclosed fee.

The 23-year-old, who had scored 40 goals in 87 games since joining the Saddlers from Shrewsbury Town in June 2014, handed in a transfer request on Wednesday.

And just 24 hours later he was unveiled as a Barnsley player after passing his medical at Oakwell.

The striker made his Wales debut in the friendly against Ukraine back in March but wasn’t fit enough to make it into the Euro 2016 squad.

Brentford reportedly had a bid turned down in January but their new Championship rivals Barnsley have managed to get a deal over the line.

Tykes head coach Paul Heckingbottom told the club’s website: “Tom will fit in well with our playing philosophy. We want to play two up front and Tom will add undoubted strength to our strike force. He is a clever player with an eye for goal. I am sure he will become a fans’ favourite.”
Bradshaw, who has signed a three-year deal, added: “I was very impressed with Barnsley last year. The service to the strikers was outstanding. When the chance to join Barnsley came, I jumped at the chance. I like the playing style and I am sure I will fit in. I am raring to go.”