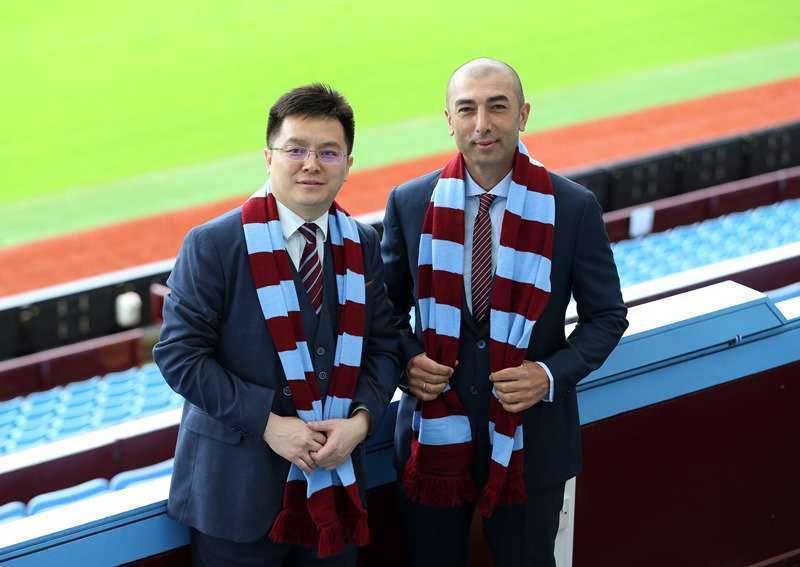 New Aston Villa Tony Xia has gone beyond simply reversing the club’s steep decline to vow that he plans to make the Villans as big as Real Madrid and Barcelona in less than a decade.

Xia, owner of Recon Group, made his £75m takeover from Randy Lerner official on Tuesday, 24 hours after the Football League had cleared him through their Fit and Proper Person Test.

With the agreement reached in May, the 39-year-old Chinese businessman has wasted no time in preparing the club for battle in the Championship, with ‘rebuilding’ certainly the buzzword at Villa Park.

To do so, Xia has pledged £30m-40m to new boss Roberto Di Matteo with the hope this will guarantee an immediate return to the Premier League.

“That [money] is something that I will talk about with Robbie, we will do whatever we can to support him,” Xia said, with the club very close to signing Bournemouth captain Tommy Elphick.

“This is a new challenge and I am looking forward to working with Roberto, Keith [Wyness], and everyone else. I want to take this club back to the right place.”

“I hope in five years, or after five years, we will talk of this club as Madrid or Barcelona,” Xia told BBC West Midlands radio.

Xia overshadowed the day which was meant to be centred on Di Matteo’s appointment, but the Italian nonetheless remained focussed on matters on the pitch and the magnitude of the job at hand given Villa’s shameful season.

“It’s a rebuilding job. The last three or four years it has been a club in decline and relegation topped that off last season. I know it will be difficult and I have to turn things around,” stated the former MK Dons and Chelsea coach.

“We need to turn a team that has struggled into a strong competitive team. All aspects need to be looked at.

“It will be a big job but with the right personnel we can do well. It is an exciting project, a new start, new ownership and management.

“We will take it from there and try and do everything we can within reason to help us and guide us. The objective is to get promotion this year, it will take time to sort the team out and we want results yesterday instead of today,” Di Matteo concluded.

Villa are gearing up for their first season outside the top flight in 28 years, with only one week until the Football League release the fixture list for the Championship, League One and League Two.