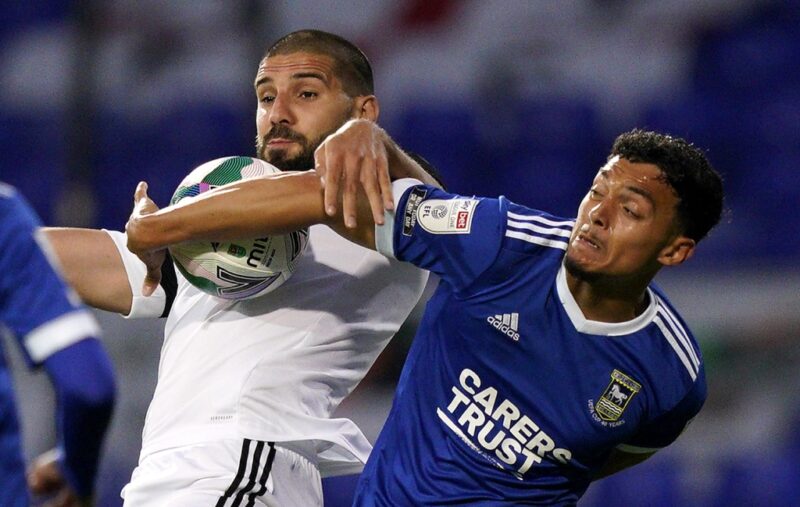 HAVING followed in his father’s footsteps by scoring on his Ipswich Town debut aged just 16, Andre Dozzell knows all about the importance of keeping your feet on the ground.

And that is exactly what the midfielder, now 21, is urging his Tractor Boys teammates to do as they look to escape League One at the second attempt.

Dozzell, the son of Town legend Jason, has had a stop-start career since his memorable bow at Hillsborough in April 2016 – not helped by an ACL injury sustained at the beginning of the 2017/18 season.

Going into Saturday’s clash against Accrington, however, Dozzell had played every minute of Ipswich’s league campaign – and helped his side to the League One summit with four wins and a draw from their opening five matches.

Paul Lambert’s men are all too aware that a good start means little if it cannot be maintained, having slipped out of the play-off places last season following a dramatic loss of form, but Dozzell believes his side are better equipped to stay the course this time around.

“We are only a few games in so we have to keep our momentum going. It’s a long, hard season and we don’t want to get carried away.

“We have to keep the standards high and keep pushing ourselves, whether that’s in training or matches.

“And we have to stick to our style of play, I think that’s key. We don’t want to lose a game or two then change our style – we have to keep doing what we’re doing.”

Dozzell has excelled in a midfield anchor role this season, keeping his side ticking over with a superb passing range and earning the club’s September player of the month award – something he was keen to share the acclaim for.

“I only started playing there this season but I’m enjoying it. I’m a ball-playing midfielder so I think it suits me.

“The gaffer was a central midfielder himself, so he’s been giving me positional and tactical tips which I’m taking in.”

And while it may now be two decades since Town took the Premier League by storm and finished fifth as a newly-promoted side, he is eager to play a central role in helping his local club back to where he feels they belong.

“It feels like ages ago that I made my debut so I want to kick on and start making up for lost time,” he said. “I’m 21 now, I’m not that young and I’ve got to establish myself.

“We have to deal with being a big club at this level. Teams might sit off or they might come at us, but we as players have to find a way round it on the pitch.

“This isn’t where we want to be but I want to play a part in taking us up. We definitely have the quality and the depth in the squad to do it.

“Promotion would be great but I wouldn’t want to stop there. I don’t just want to aim for the Championship, I want to aim higher.”