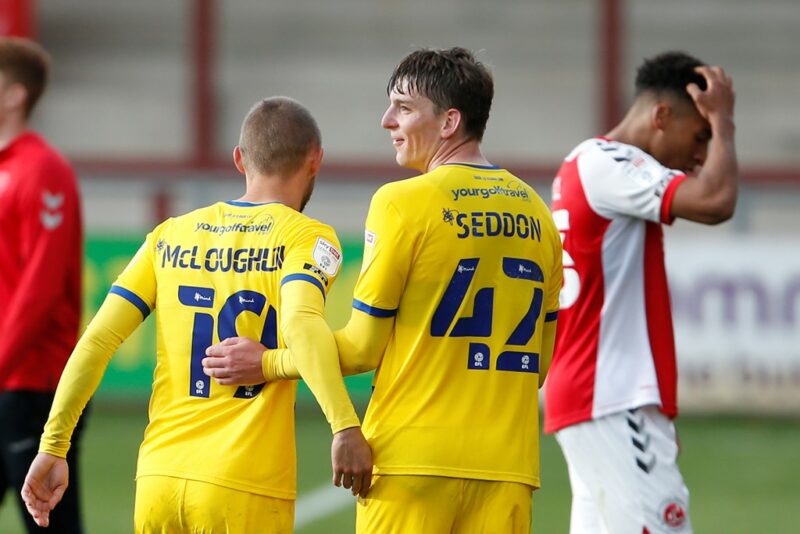 THE lure of being part of AFC Wimbledon’s eagerly-anticipated return to Plough Lane was too tempting for Steve Seddon to turn down.

So having now rejoined the League One club on loan, he wants to make sure the move back to their spiritual home, which is just a matter of weeks away, is a memorable one.

Seddon was part of the Dons side which staged a great escape at the end of the 2018/19 campaign before spending the second half of last season back on loan in League One with Portsmouth.

Having found himself left out of Aitor Karanka’s first matchday squads at parent club Birmingham this time around, the 22-year-old left-back was eager for first-team football and the chance to witness Wimbledon’s new era first-hand was a big pull.

“As soon as I knew Wimbledon was on the cards, I swayed towards that,” said Seddon. “Since I left, there has been all the talk of going back to Plough Lane. I definitely thought something special could be done and I wanted to be a part of that.

“Wimbledon have suffered a lot but achieved so much as a club. Now they are finally coming back home, where such great memories were made. It will be great to be back at Plough Lane to create new memories which are just as good.”

Wimbledon have earmarked the visit of Doncaster on November 3 as the first match at the new ground which is on the site of the former Wimbledon Greyhound Stadium – around 200 yards from the place they called home for nearly 80 years.

The club are playing at QPR’s Kiyan Prince Foundation Stadium until then and have made a promising start to the campaign, going unbeaten in their opening three league matches ahead of the weekend.

Their first win came last Saturday at Fleetwood as Seddon marked his second Dons debut with the only goal, having put pen to paper just two days previously.

“It was a bit chaotic,” he admitted. “I had a couple of training sessions then was straight in on the Saturday.

“But it’s nice to be back and getting to know the group again. There has been a big turnover of players since I was last here but the lads have all been very welcoming.

“Winning away against a side who made the play-offs last season definitely builds belief. There is enough quality in the squad to push for the play-offs but we have to take it a game at a time and see where we are in January or February.”

Seddon made five appearances for Birmingham at the start of last season before finding himself out of the first-team picture. It led to his loan switch to Portsmouth, who lost in the play-off semi-finals on penalties against Oxford.

The defender’s first loan spell with Wimbledon – which followed hot on the heels of five months with Stevenage – ended with a similar feeling of having more to give and a season-long deal offers welcome certainty following a nomadic period.

“All I’ve done in the past two and a half years is go on the move every six months, which is definitely tough,” admitted Seddon.

“You make friends, you make connections with the town you’re in and the fans, then you’re off again.

“This is my fourth loan spell and I’ll be 23 at the end of this season. I want to push myself, test myself in different ways and really analyse how I can be a better player and teammate.

“Everyone at Wimbledon and all the fans have really welcomed me back, so it’s definitely time to repay that on the pitch.”