IF YOU’RE going to win promotion, then why not do it in style? Plymouth Argyle certainly did – hammering Newport County 6-1 to get the party started at Home Park on Easter Monday.

Matty Kennedy and Jake Jervis both struck twice, while the classy Graham Carey and Ryan Taylor also struck as the Pilgrims ran riot.

But this was Plymouth’s day as they joined the already-promoted Doncaster Rovers in earning their passage to the third tier.

The Pilgrims sufferered back-to-back relegations in 2009-10 and 2010-11 to drop down to the Football League’s lowest tier.

After troubled times on and off the pitch in recent years, they’ve picked up in the last couple of years.

They looked good bets for promotion last term, but it wasn’t to be as they slipped to fifth place by the season’s end and then lost 2-0 to AFC Wimbledon in the League Two play-off final at Wembley.

Argyle boss Derek Adams carried out a massive rebuilding job over the summer. The Pilgrims had only four players signed on by mid-June, but then the manager got busy and brought in 14 players.

Midfielder Carey, who has been so influential this term, has praised Adams for moulding a new-look squad that could ultimately take the final step and achieve promotion.

The 27-year-old said: “I don’t think I can put into words what he’s done – to have four players at the start of the season, and to bring in the squad that he’s brought in, is testament to him.

“It took us a while to get over that defeat at Wembley but I think the recruitment from the manager and the club has been first class.”

As for Adams, he’s now set his sights on trying to overhaul Doncaster to pinch the League Two title.

“We’ve achieved our goal of getting automatic promotion and, with three games to go, we have still got an opportunity of winning the title,” said the 41-year-old ahead of yesterday’s trip to play-off chasing Colchester.

“That’s our main focus between now and the end of the season. We will probably have to win the three games to give us any chance of winning it.”

The former Ross County boss is keen to retain Carey’s services next season – he is out of contract this summer – as he plots a challenge in the third tier next season.

There will no doubt be some wheeling and dealing to come, but the Scot believes the Pilgrims need to be careful how they spend their money.

He added: “We’ve got to live within our means. That is what this football club has tried to achieve after going into administration (in the past).

“Previous boards and managers have wasted a lot of money and we can’t afford to get ourselves into that situation again.”

But that can wait for another day as jubilant Plymouth enjoy that sweet taste of promotion success.

*This article originally featured in The FLP’s 23 April 2017 edition. 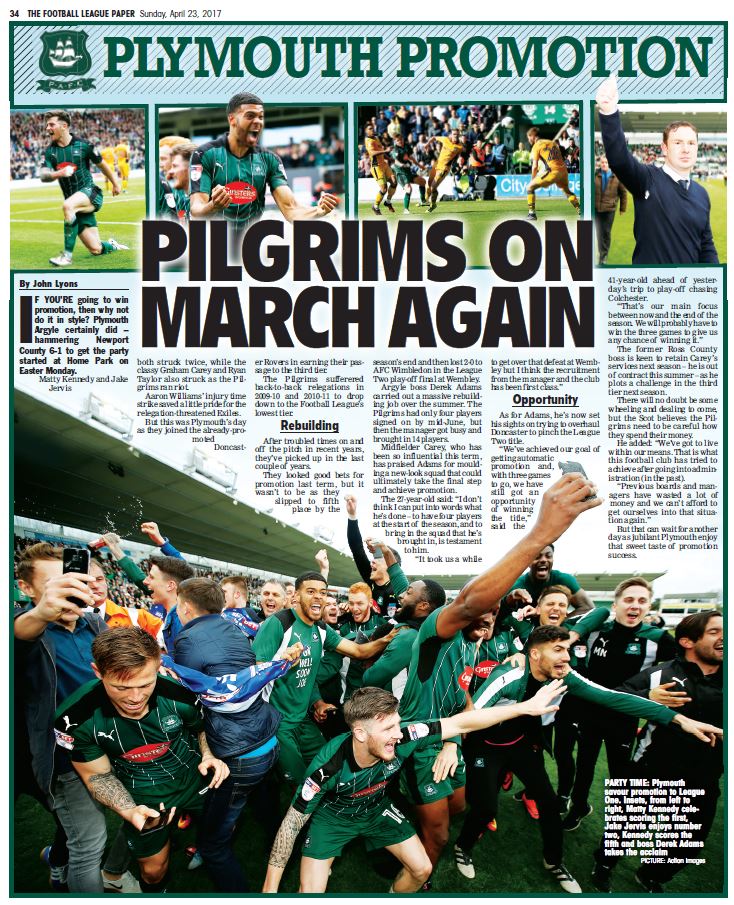