While Charlton fans watched their side put in an impressive performance against table toppers Peterborough United last night, behind the scenes, the situation at the club appeared to be falling apart.

Protest group, Coalition Against Roland Duchatelet (CARD) promptly released a statement which gave the club 48 hours to issue a response to the article.

Local MP Matthew Pennycook also waded into the debate, tweeting – “The situation at #CAFC is utterly shambolic and it now appears that staff at The Valley are also being targeted. Fans are telling me that they’re genuinely concerned about the future viability of the club if the takeover process fails. Enough is enough Roland Duchatelet, just go.”

A certain air of tension could be felt at The Valley last night as supporters digested yet another damaging allegation against the club’s ownership.

A loud chorus of songs against the club’s hierarchy either side of half time offered a clear statement of the ever increasing feeling of discontent among Addicks fans. If you think the Addicks can ignore their off-the-field woes and be a success on it then don’t forget to check out the top bookmakers for the latest odds and offers.

Fuel was added to the fire this morning when an email written by Duchatelet to the club’s staff confirmed that bonus payments would not be paid due to the club “having a very bad financial year last season.”

Unsurprisingly, the email provoked anger among Addicks fans, with CARD announcing plans for a large scale protest before Saturday’s match against Fleetwood Town at the Valley.

This call for action was swiftly followed by a strongly worded open letter, written by Charlton staff to Duchatelet (below) 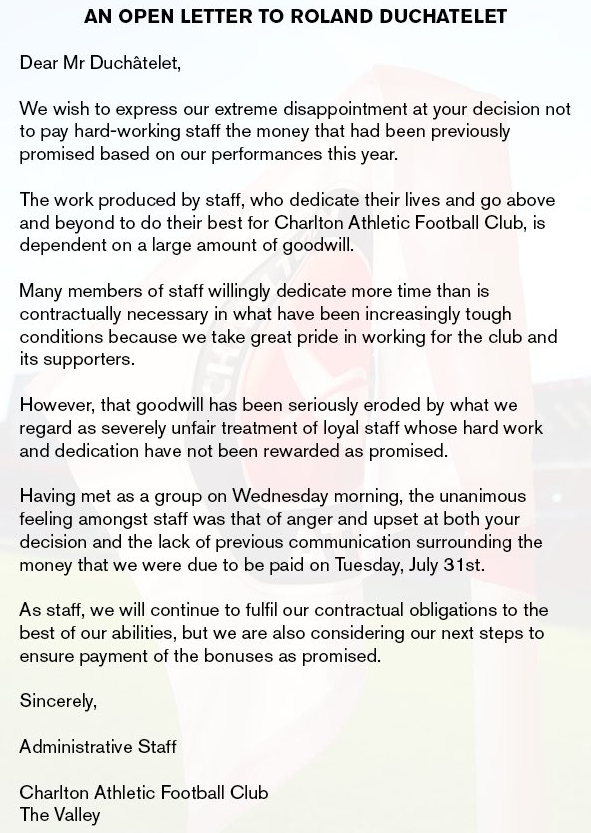 Meanwhile, Duchatelet continues to be locked in negotiations over a potential sale of the club to an Australian consortium.