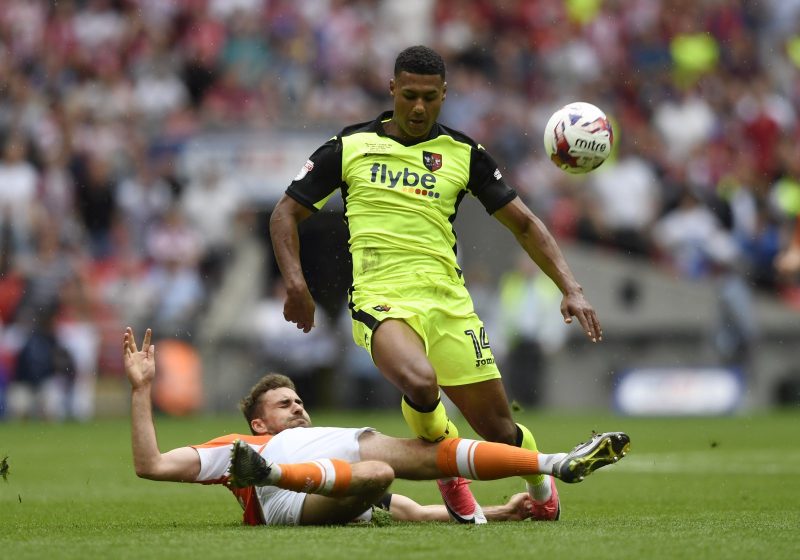 Clark Robertson says the advice of Blackpool boss Gary Bowyer to ‘play angry’ has taken his performances to the next level – and he wants to use this season as a platform to push for a first Scotland call-up.

The ball-playing centre-half has been one of the Seasiders’ top performers following their League Two play-off triumph almost 12 months ago.

Robertson, 24, joined Blackpool from home town club Aberdeen in 2015 and has gone on to establish himself in the side over the last three seasons – and he’s delighted with how they’ve fared this year.

“We’ve done well,” Robertson told The FLP. “After coming up last season through the play-offs, I think we were tipped to go down. The manager recruited really well in the summer.

“We were flying at the beginning of the season. We had a sticky patch around Christmas and just after that, but we’ve picked up again recently.

“Overall, we’ve more than held our own and I think a top-half finish (the Seasiders were 11th pre-weekend) back in this division, will represent a good season for us.

“After I left Aberdeen, I was just delighted to be back playing because I’d had so many injury problems, which I’ve overcome.

“My first season was tough because of relegation, but since Gary Bowyer’s come in it’s been on the up – for the team and me personally. All aspects of my game have really improved.

“Before he came in I probably wasn’t as aggressive as I should have been. I think that’s changed in the last 12 months. He almost wants me to play angry.

“I’ve done that, especially this season, and it’s helped me on the pitch. My defending has improved and I feel I’ve shown I’m capable of playing at this level.”

That form has seen plenty of interest in the former Scotland U21 defender, who is out of contract this summer.

He feels his leadership qualities have also emerged alongside Curtis Tilt in the heart of defence. Boss Bowyer has a little goal competition going between the pair.

“Curtis has stepped up from Non-League and been fantastic. He’s not looked out of place once,” Robertson said.

“The manager set us a wee competition. Tilty’s not too happy because it only really came about once I got my third goal! He’s on one and is a bit annoyed.

“But, seriously, I spoke with the gaffer before the start of the season and my target was to hit five goals. Considering I didn’t score any last season, to get three isn’t too bad!

“Adding goals to your game as a centre-back is a good thing. The manager said, with the size we are, we should be scoring more goals when we’re up for corners and free-kicks.”

After Robertson scored in February’s 2-0 away win to Portsmouth, Bowyer joked it was the least the defender could do because of dad Michael’s dedication to following his son all over the country.

“The only ground in League One and League Two he’s not been to is Gillingham, so he’s been able to get there this weekend – he likes to tick them off,” Robertson said.

“He drives down from Aberdeen for our home games and, depending on where our away games are, he might fly. He’s a bit of a mad man but he loves it. He’s a big influence.”

Robertson isn’t afraid of setting big targets and that includes reaching the international stage.“One of my main ambitions is to get in the Scotland squad,” he said.

“I think, with my performances this season, there’s no reason why I can’t.

“I’ve had a taste of it with U19s and U21s. There’s nothing better than playing for your country and it’s something I want to do again. Hopefully, I can do that in the next couple of years.

“I’ve got to keep pushing and playing the way I am so that, hopefully, I can get to the next level in my career. That will boost my chances of playing for Scotland.”