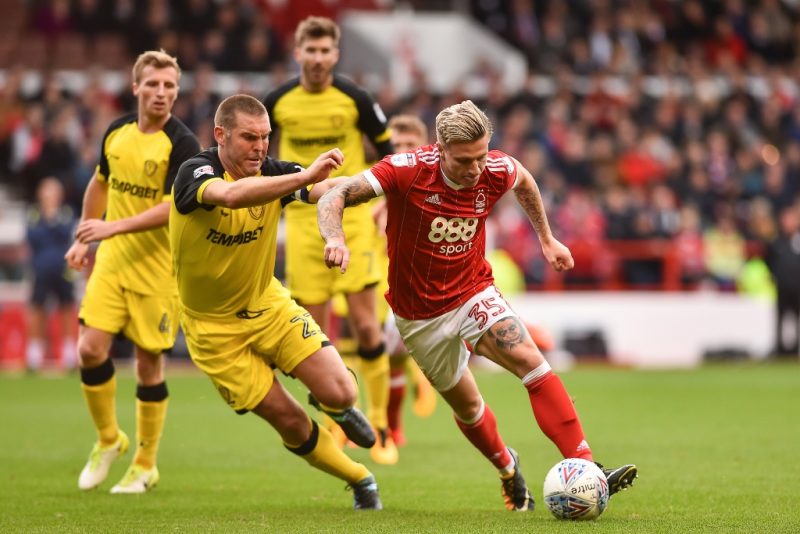 THE OLD pals’ act is working like a charm for Jake Buxton.

The 32-year-old is in the midst of his second spell as a Burton player and is once again back under the wing of Nigel Clough, the manager who handed him a career lifeline with the Brewers following his release by Mansfield in 2008.

It means he remains in the Championship, having left relegated Wigan by mutual consent last summer.

The Buxton-Clough partnership is clearly one both parties are more than happy to reignite time and again.

The defender, a natural leader who skippered Mansfield at the age of 21, relished working under Clough – even if he is cracking the whip harder than usual this time.

“I think I got given a leg-up when I moved from Burton to Derby,” said Buxton, who also featured for Derby in their Championship play-off final defeat to QPR in 2014.

“I got an opportunity to step up from the Conference to the Championship and that played a big part in the decision this summer to re-join Burton.

“People follow him around. I think he knows what he’s getting from those sorts of players. We know, as a group, what we expect from him.

“I think it works for both the club and for the manager. He is a great manager to play for.

“He’s not only a good manager but a top, top bloke and he cares about your family, which is massive.

“The majority of the lads who are here, especially the boys who were here last season, have witnessed Nigel Clough at his best.

“We’ve been worked a little bit harder than we’d normally be under this manager, but there’s still a good chance that results will pick up to get us out of trouble.”

Last season, the Brewers, whose stadium is still less than a seventh of the size of the biggest ground in the Championship, punched comfortably above their weight and successfully kept themselves in the second tier.

Buxton, who has regularly captained Burton this season in the absence of injured skipper Shaun Barker, believes the element of surprise was his side’s trump card.

It’s something Clough’s troops cannot rely on if they’re to repeat the trick this time around.

“Last year, a lot of teams got caught off-guard and probably under-estimated Burton, and they beat the likes of Aston Villa, Derby and Sheffield Wednesday,” said Buxton.

“They beat a lot of big teams at home and it’s been a little bit different this season.

“People are a lot better prepared for coming here.

“Our away form’s been quite good, but our home form has not quite replicated what the lads did last season, so we’re trying to get that back.”

The Brewers have indeed travelled well, with a stunning 3-0 win at Sheffield Wednesday on New Year’s Day.

It was their third away success on the spin, with just goal difference currently keeping them in the relegation zone.

With plenty of hard work left to do in their bid to ensure Burton’s first-ever Championship stint extends into a third season, Buxton and Co will be staying as humble and grounded as they possibly can.

He added: “We all started on the park, we all started with our mates at school, and if you let yourself get carried away by thinking you’ve achieved something by playing in big stadiums, you’ll soon find yourself crashing back down.”