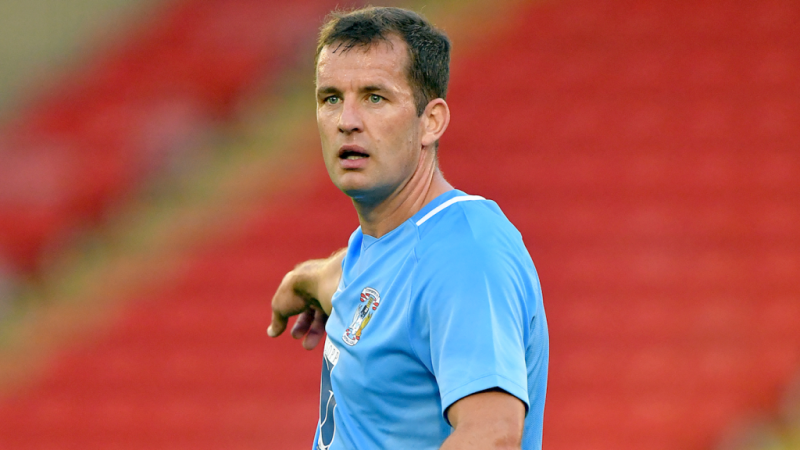 For a player nearing the latter stages of their career it is always a good idea to make preparations for what’s next, and Coventry City captain Michael Doyle is taking a rather in-house approach to doing so.

The 36-year-old has recently been taken under the wing of Sky Blues assistant manager Adi Viveash, as he prepares for life post-playing career.

Doyle travelled as part of the club’s coaching staff for last week’s Checktrade Trophy encounter at Walsall, as he looked at the game from a different perspective on a night where he wasn’t lacing up his own boots.

“Adi said to me to maybe come and have a look and be involved in the warm-up,” the midfielder told the Coventry Telegraph.

“He said it would be good for me to get that look from that perspective and see the other side of it, so it was a great opportunity – and who is going to turn an opportunity like that down?

“It was brilliant and that’s one of the things that makes Adi such a top coach because he’s looking at all angles and constantly talking to people like myself, and the training he does is fantastic which is important, especially at my stage of my career.”

Although the game was a valuable insight into what his future might hold, Doyle insists he has no plans to retire any time soon.

“Obviously I want to stay in the game after playing but I still feel I’m fit enough to play another few years,” he said.

“I started my badges a few years ago and it’s something, certainly down the line, that I will see where it goes. But I’m just concentrating on playing at the minute.

“I think you have to start sowing the coaching seeds early these days, and I also think that a lot of people finish their career’s too young and seem in a rush to be coaches.

“I’ve always been told to play as long as you can, and for me I am certainly going to get every ounce out of my career and see where I go in my career.”