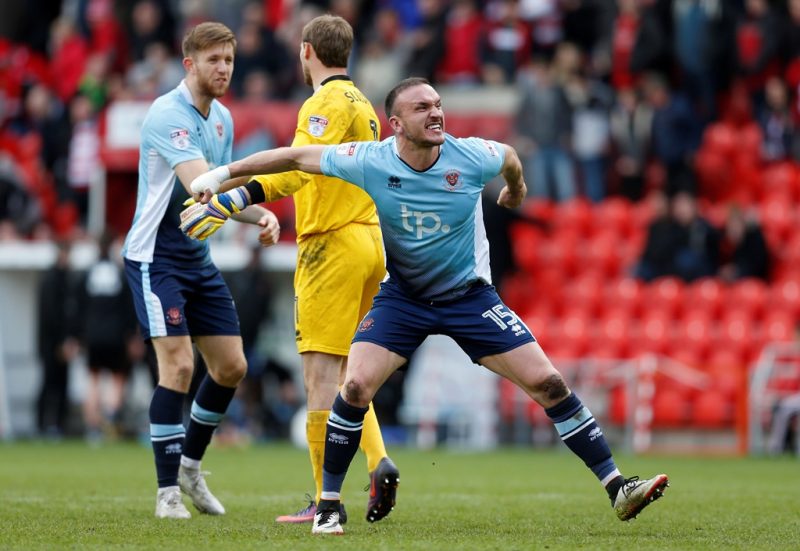 Bury’s latest signing Tom Aldred said the lure of a promotion challenge is what tempted him to leave Blackpool and join the Shakers, after he signed a two-year deal with the club yesterday.

The 26-year-old made over 100 appearances in two years for the Tangerines, and led them to promotion via the League Two play-offs last season, but decided to leave the Lancashire coast after seeing Lee Clark unveil a host of impressive summer signings.

The likes of Jermaine Beckford, Stephen Dawson and Adam Thompson have already arrived at Gigg Lane since the end of the last campaign, and Aldred wanted to be a part of a squad plotting promotion to the Championship.

Speaking to the Bury Times, the former Accrington Stanley centre-back said: “I know Lee Clark from my time at Blackpool. We had a similar chat to when he took me [to Blackpool] from Accrington.

“He said he wanted to rebuild the squad and be challenging for promotion.

“It didn’t quite work out that way back then but the proof is in the pudding now.

“You can see by some of the signings he has brought in that we are going to have a really good go at it this year.”

Back-to-back promotions would certainly be an impressive achievement for Aldred to put on his CV, but the experienced defender knows he has a battle on his hands to even make the starting XI, let alone reach the second tier.

With the likes of Thompson, Nathan Cameron and Eoghan O’Connell, competition in the heart of the Bury defence is rife, and Aldred said: “It seems like a good bunch of lads here.

“Competition brings out the best in players so it’s only healthy for all of us.

“I’ve only trained once but you can tell the quality of the players in the squad is high.

“Training has been very impressive, especially the strikers. They are bound to score goals this year, so if we can keep it tight at the back then we will have the best chance of being successful.”