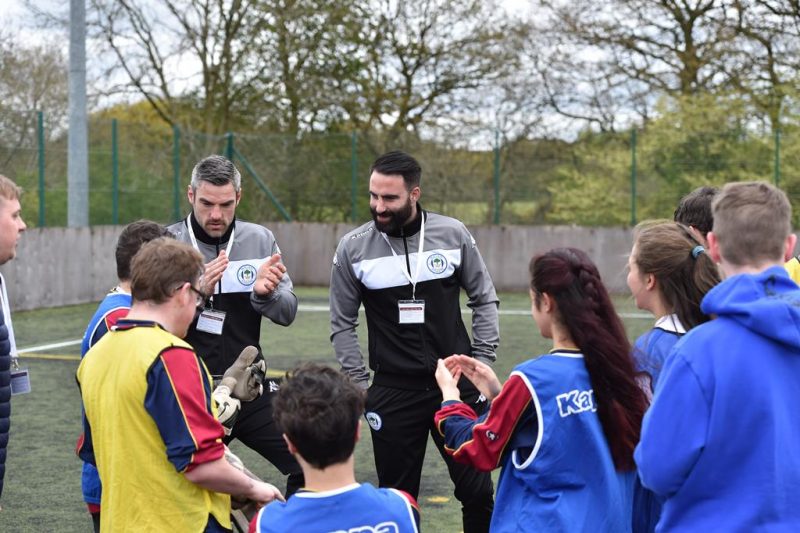 EFL clubs showed their spirit by coming together to take part in the first-ever EFL Community Day of Action on Tuesday.

The 72 clubs showcased the significant positive effect they are having in their local areas throughout the year, working with more than a million people in football-led community programmes and activities every season.

The Community Day of Action attracted widespread attention for the activity of EFL club trusts, who coordinated a variety of projects across key areas of sport, education, health and wellbeing plus community engagement.

The R’s fan attempted to take his own life on multiple occasions after his father committed suicide.

But playing football for Rangers’ mental health team gave him renewed hope and enthusiasm for life.

Doncaster Rovers held a community takeover day with health and well-being, National Citizen Service (NCS) and football sessions all featuring, while Checkatrade Community Club of the Year Portsmouth also ran numerous events for their local community, including a Wheels For All group.

Defender Christian Burgess was in attendance and showed his support by taking part in the event.

Bristol Rovers Community Trust invited their Extra Time Club, who are over the age of 60, to join first team players and the club’s management for a physical activity session and quiz.

At Wigan Athletic, pupils in year six at St Peter’s Hindley Primary School were given an exclusive tour of the club’s training centre, before first team players Matt Gilks and Craig Morgan took part in a disability football session as part of the Every Player Counts programme.

The parents of Jimmy Mizen, who was murdered in 2008 in south-east London, spoke about knife crime.

Charlton players Brandon Hanlan and Jordan Botaka were in attendance to share personal stories and show their support towards the club’s work to combat the issue. Luton Town also gave their full backing to the community day with a hat-trick of activities.

In addition, Luton defender Johnny Mullins and Luton Ladies winger Dionne Manning posed for pictures at the side of the pitch, to show the Hatters are united in support of the Alzheimer’s Society Dementia Awareness campaign. Finally, a reserve game at Kenilworth Road was watched by a crowd of 43 residents from Heywood House day care centre.

EFL Trust chairman John Nixon said: “Our clubs engage with people from all walks of life and the EFL Community Day of Action has been a fantastic effort.

“Football inspires people to do activities they wouldn’t normally do and all 72 clubs work hard in areas such as health, inclusion, sport and education.

“Approx £50million is being invested every season by the EFL Trust and Club Community Trusts into these key areas and the Community Day of Action has brought everything to life.”