Home / Featured / Big Interview: Chris Basham – ‘We lost, bought some beers, and then went on an 18-match unbeaten run’

Big Interview: Chris Basham – ‘We lost, bought some beers, and then went on an 18-match unbeaten run’ 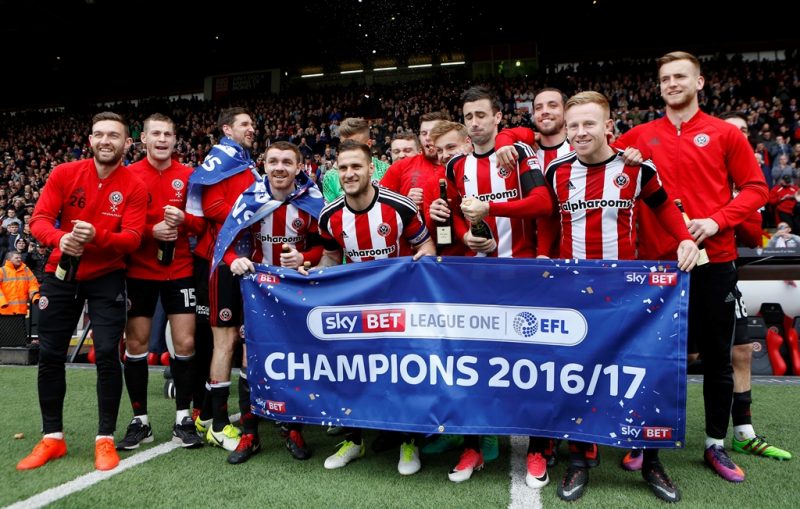 CONSIDERING Chris Wilder once ordered his skipper off the bus to buy beer, the Sheffield United boss was hardly going to stop his heroes enjoying a post-promotion party.

“The chairman says he’s coming to see us after the Chesterfield game on the final day and apparently he’s got a surprise planned,” laughs Chris Basham, part of the Blades side that last week ended a six-year exile from the Championship.

“We’re hoping Las Vegas but that might be a big stretch for a League One club! Whatever the case, we’re planning four days on the drink after that final whistle goes.

“The gaffer says the white flags will be out before we even get to Vegas if that happens, but being a Geordie I’m duty bound to keep the party going as long as possible!”

White flags were all too common at Bramall Lane before the arrival of Wilder, a lifelong fan and former player with Blades in his blood.

With the exception of one terrific season under Danny Wilson, United’s miserable stint in League One has been pocked with frustration, failure and disappointment.

Players arrived with big reputations and even bigger pay-packets, only to crumble under the fervent expectation of 27,000 fans. Opponents gleefully preyed on their apprehension.

Such a millstone had Bramall Lane become that United actually collected more points from away games in all but one of the last four campaigns.

Basham, signed from Blackpool in the summer of 2014, was one of those underachievers and says he was often consumed with anger and regret. “Those feelings were massive,” says the 28-year-old, who can operate in defence or midfield. “My first year, we had a run to the FA Cup semi-finals and that kind of obscured the problems.

“But they were always there. Every time a team came to Bramall Lane, it was a Cup final for them. Playing in front of 27,000 fans, great big pitch. Some of the boys – myself included – didn’t recognise that. We didn’t rise to the challenge.

“It was hard. It was hurtful. You went home frustrated and you ended up taking things out on your family.

“Last year was the hardest of all. We just didn’t do anything. We got a lot of stick and, to be fair, we deserved it. It was hard to pull yourself round from that.” 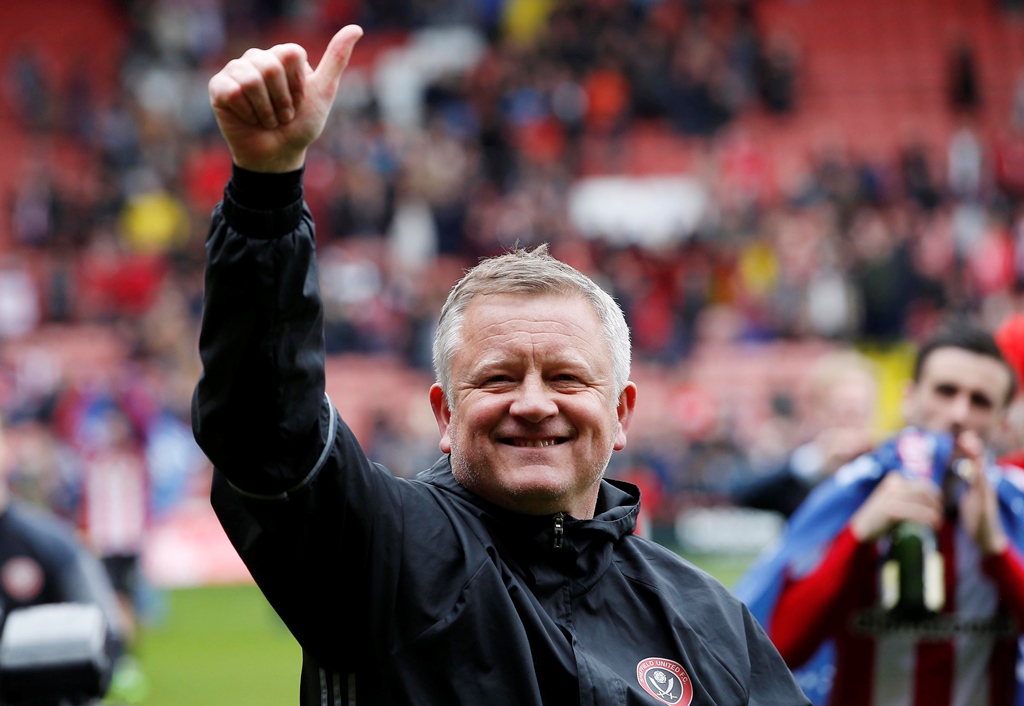 Alive and kicking: Chris Wilder has led Sheffield United back to the Championship after six squalid years spent in League One (photo: Action Images / Craig Brough)

Enter Wilder, fresh from promotion to League One with Northampton and armed with the weekly complaints of friends and family. His first – and only – priority was to give them a side to be proud of.

“The connection to supporters had been lost over the years,” said Wilder after a summer that saw 20 players head for the exits. “And that’s what always made this place such a fortress. The fear of coming to Bramall Lane was a lot less than it should have been.”

The results have been spectacular. Inspired by the goals of skipper Billy Sharp and anchored by the honest toil of men like Basham and Jake Wright, the Blades have dropped just 15 points at home all season.

Last weekend’s 2-1 victory at Northampton secured promotion with four games to spare. The League One title is assured.

“It’s just been outstanding from start to finish,” says Basham. “Everything I expected of Bramall Lane when I joined has come true. The noise. The fear-factor. It’s all back.

“The gaffer deserves massive credit. He brought in lads who’ve been promoted, who knew the league. The training is so intense. His favourite saying is ‘Keep the hammer down’ and everyone has bought into it.

“From the outset, all he wanted was players willing to fight for Sheffield United. He’s got a sign up in the dressing room. It’s a tweet from a fan that says ‘All we care about is the team giving 100 per cent’.

“He’s with the fans through and through – he is one. Because of that he’s very aggressive on the training ground, not afraid to drop anybody. If somebody needs a kick up the arse, he’ll provide it.” 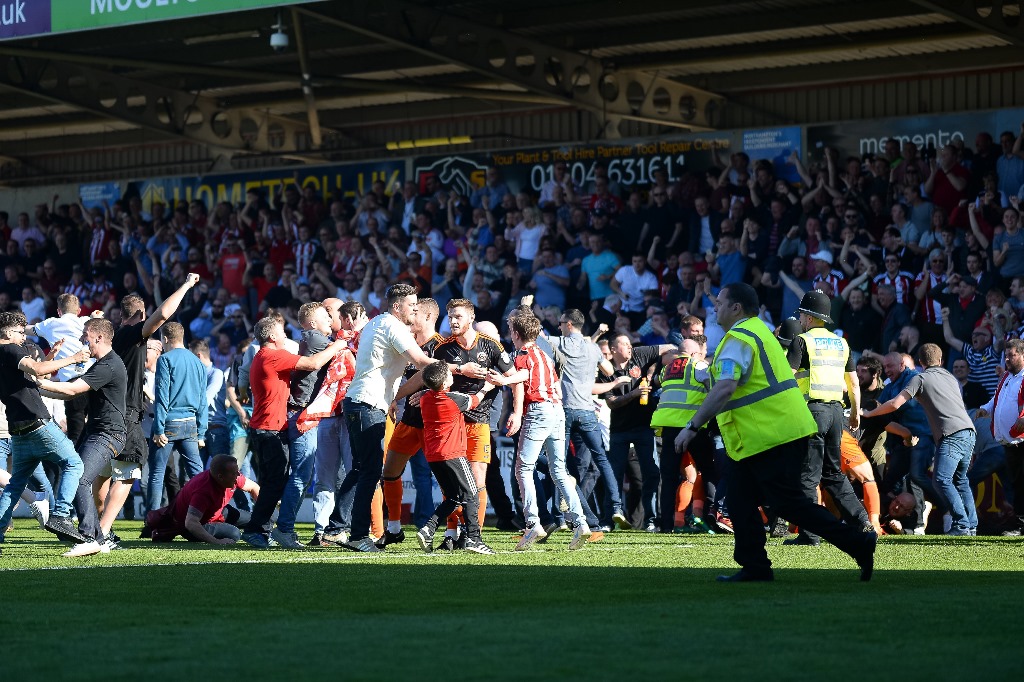 Wilder’s old school values were vividly illustrated by Sharp this week, who recounted how he was ordered off the team bus following a defeat by Millwall in August to stock up on beer from an off licence.

“It’s true,” says Basham. “He basically said to us ‘Right, that’s three defeats on the spin, let’s have a drink and get it out of our system’.

“The whole atmosphere just lifted and we ended up going on an 18-game unbeaten run after that. Since then, after every game we’ve had a beer on the bus and the morale around the place has been fantastic.

“We go on dos together, we have meals together, we go out. The gaffer has brought that feeling of togetherness back, got everyone working for each other. It’s almost like he’s given the fans their club back. It’s brilliant to be part of.”

As were the scenes at Sixfields – the very location where Wilder had celebrated promotion 12 months earlier.

“We’d never been nervous,” insists Basham. “We were too confident in what we were doing. But the nearer it gets, the more edgy and excited you get.

“So when that late goal went in for 2-1, it all came out. We’d have loved to do it at our place but I’ve got to say thank you to Northampton.

“It was the gaffer’s old club and they were brilliant. They let us stay on the pitch, they let the fans on, even tolerated us covering the dressing rooms in beer and champagne. It was a great feeling.”

Now Basham is looking forward to Vegas (possibly), two ties against boyhood heroes Sunderland (almost certainly) and a season devoid of pressure (sadly for him, unlikely).

“I know there’ll be pressure, but it won’t be to win a league,” says the former Bolton man. “It’ll be steady away, make sure you don’t go down. If the fans see progress, I think they’ll be happy.

“As for Sunderland, it’s sad to see them go down but I think they need it. It’s such a horrible atmosphere up there now. What they need is to start winning games again, then the love will come back to the club.”

After this season, nobody knows that better than Basham.