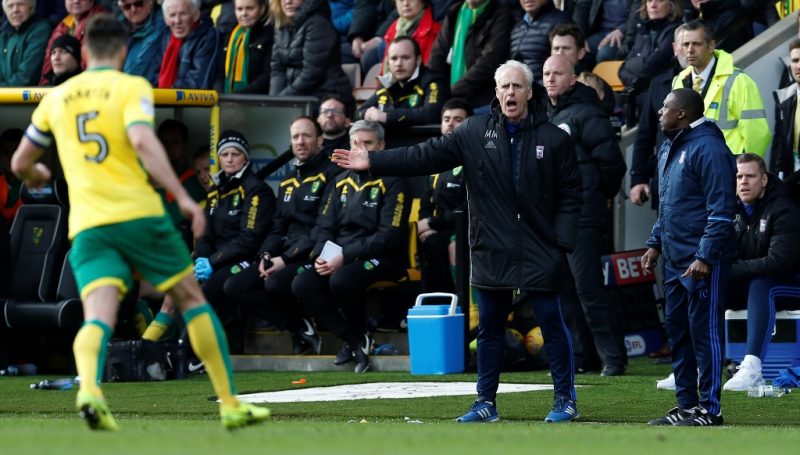 After reaching the play-offs in 2015, the expectations of Ipswich fans unsurprisingly inflated, but last season was an average one, and this season has seen the side struggle again.

After losing to National League side Lincoln in the third round of the FA Cup, things looked to be at breaking point, and McCarthy said “if the club want to sack me, so be it”, but the Tractor Boys have since begun to turn things around.

The Suffolk side are unbeaten in five after their point at Carrow Road, and McCarthy said: “I would hope that performance and result goes a long way to repairing our relationship with the fans.

“It’s been broken at times. They’ve not enjoyed it, they’ve not been watching good, attractive, winning football. I get that, I’ve not been enjoying it particularly.

“So over the last five games I think they’ve seen us play really well, and I would think helping stop Norwich in their tracks during a promotion push will endear us to our fans a little bit more.”

Ipswich’s recent good form has included impressive draws against promotion hopefuls Reading, Brighton and Leeds, and has hauled them up to 15th in the division.

Tom Lawrence has been stealing a lot of the headlines in the revival of the club’s fortunes, but with the Leicester loanee suspended yesterday, McCarthy reserved his praise for goalkeeper Bartosz Bialkowski.

The Polish shot-stopper produced a number of impressive saves, and his boss said: “In my mind I haven’t seen anybody better [in the Championship]. He’s outstanding

“He’s kept them out, he’s been brilliant and he’s let the one in. It happens, but what was good was we didn’t concede again, and maybe eight weeks ago we would have lost that game.”