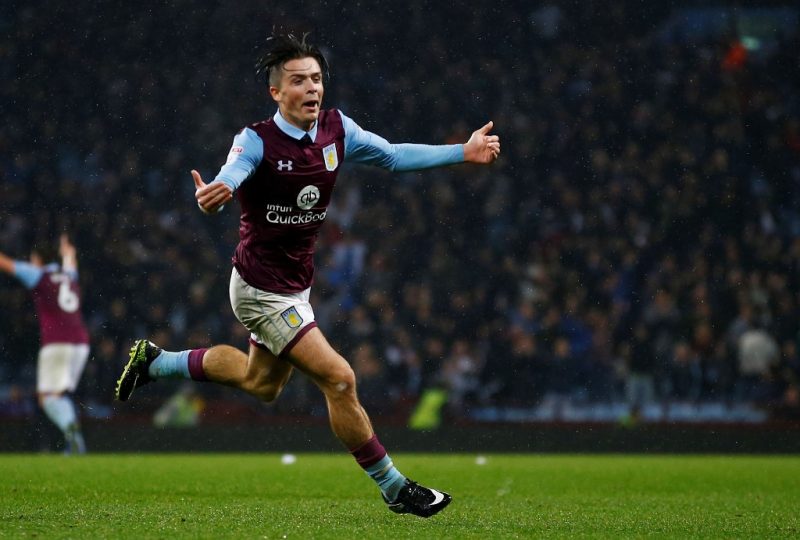 JACK Grealish will never leave Aston Villa. Not if it’s left up to him anyway. It’s his club, his home, his dream, his job to help put things right.

Relegation hit him hard. His father, mother, family are all Villa fans. There can be up to 20 of them at a home game, even though there’s not been much to watch in recent years.

Villa Park became a depressing place, with relegation fight following relegation fight. Inevitably, they were knocked clean out and it’s in the Championship that Grealish, 21, is building his career.

He will look you in the eye and say that headlines about all-night hotel parties the police had to break up, being pictured apparently flat out drunk while on holiday, the stupidity of going clubbing after a 4-0 thrashing at Everton, are over.

That, he says, is the outcome of not being able to deal with celebrity and fame when it suddenly came calling.

He still lives in the family home less than 20 miles from Villa Park, so there is considerable first-hand parental influence on tap.

“If I was in the Holte End watching me play, what I’d want to see is passion, to show you are fighting for the shirt,” he says. “You’ve got players who have good technical ability, and the team and the fans expect more of those players. But first of all show that you want to play for the shirt.

“I’ve grown up watching everyone on that pitch, hoping that one day that would be me. And it is me now. I just need to enjoy it and make the most of it. A lot of ex-pros have told me that sometimes you take it for granted, the playing, but they are the best days of your life. I’m 21 and I might have 15-16 years, but you never know what’s going to come along, do you?

“I would never want to leave the Villa. It’s a difficult question, but I wouldn’t want to leave, no. I live here. I’ve been brought up here. I’m not planning on leaving any time soon.

“This is the dream for me. Exactly the dream. All I’ve wanted to do my whole life was to play for Villa, to be classed as a Villa first-team player.”

Aston Villa’s all-time record appearance maker is a full-back, Charlie Aitken, who played 659 games over 17 seasons from 1961 to 1976. Grealish is on 69 over five years, with a fight on now if he is to quickly add any more.

Manager Steve Bruce is revamping his team in this transfer window, particularly in midfield where Grealish operates. Conor Hourihane (see back page), Birkir Bjarnason and Henri Lansbury have all arrived. It’s more congested than nearby Spaghetti Junction. 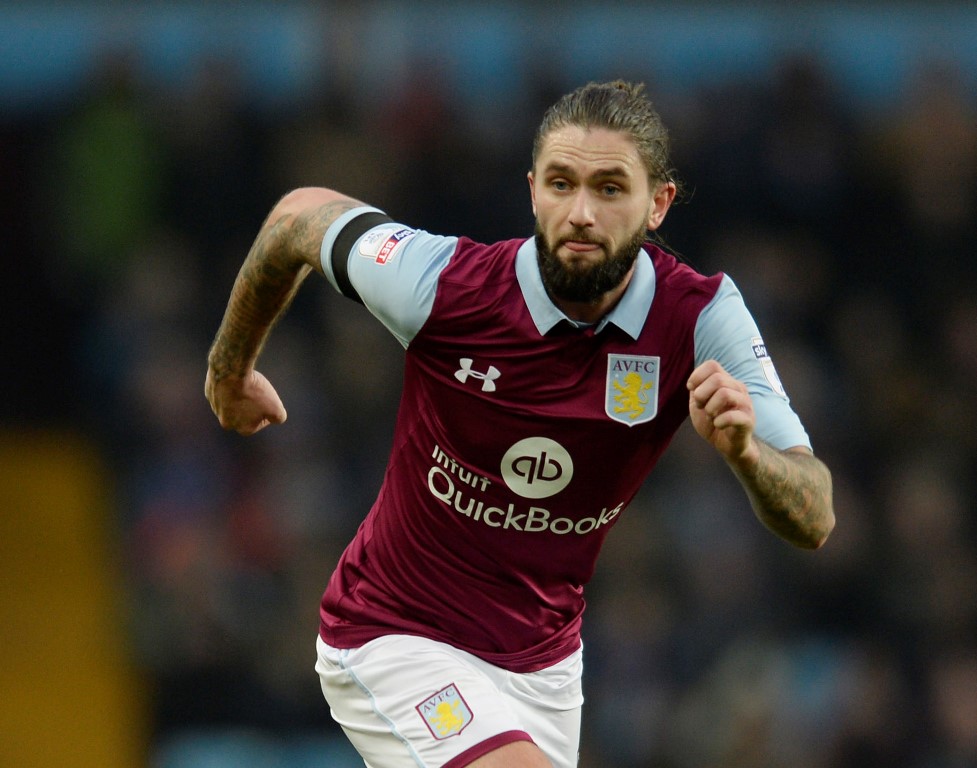 Newcomer to Clarets: Henri Lansbury and the addition of two other central midfielders by Steve Bruce will keep Grealish on his toes (photo: Action Images / Alan Walter)

When Tim Sherwood gave Grealish his full debut 21 months ago, he tapped him on the shoulder and said: “Do you fancy playing tomorrow?”

Grealish will be hoping for the same invitation when Villa play at Brentford on Tuesday.

We are sitting in the Villa indoor training area. They call it The Barn. Some would say their strikers over the years haven’t been able to hit the door, but Grealish looks down the line of weights and apparatus to the far end.

He’s been at Villa since he was six years old. He’s had a season ticket since he was four. “For me growing up, coming through the academy, it’s massive to play for Aston Villa.

“I sit here and I think to myself ‘I used to come in here and it was the first team players training, up and down, right here’.”

He points to where his memories are. “I used to look at them in shock, do you know what I mean? I used to think ‘I hope one day I can be like that’. Sometimes, football, you can take it for granted. I try as much as I can not to do that.

“Juan Pablo Angel, Gabby (team mate Gabriel Agbonlahor), John Carew, Ashley Young, Petrov. We could do with some of them today.

“I have got to fight for my place now, I know that. I’ve had my fair share of games this season (17). I feel I could have probably done more for an attacking player.

“I’ve won a few penalties and got one assist and three goals. He (Bruce) is bringing in new players.When you’ve got people who are just as good, if not better than yourself, then you have to perform better. With me that’s what I will do.”

Headlines that the Grealish family will keep are the ones for his performance against Liverpool in the 2015 FA Cup semi-final.

It was the game where fame found him. His feet did the talking, even if his head couldn’t subsequently take it.

“That was the best day of my life,” he reflected. “We were up against such a good team and on such a big stage. I remember my mum and dad were in a box upstairs and I went up and they started crying, both of them. They were just so happy.

“You see it from their point of view. Their son has just played in the semi-final for the team they both support. 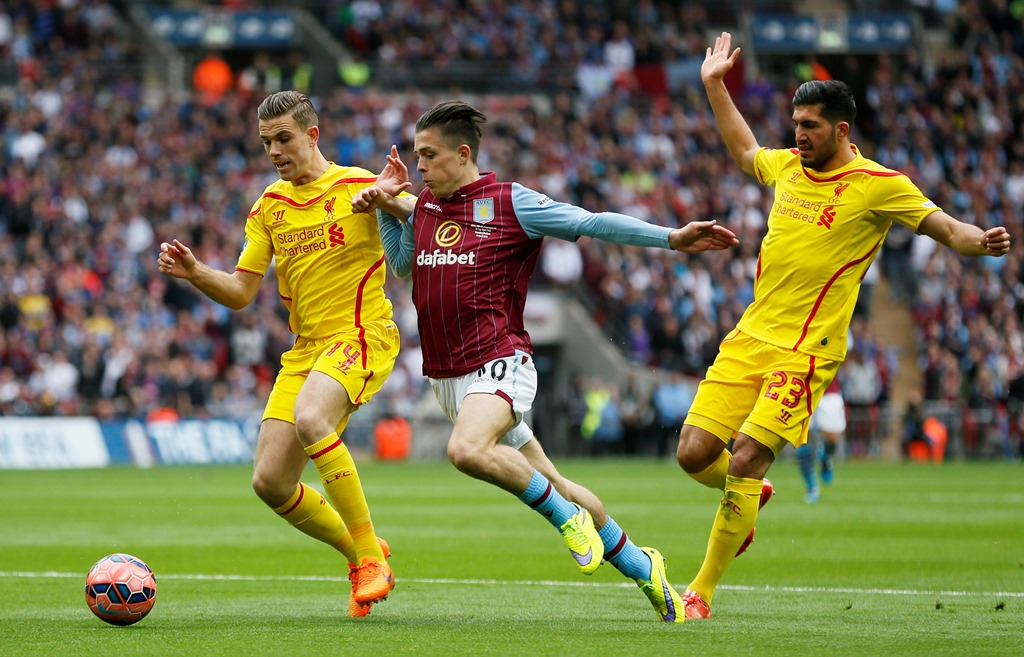 “I’d been there as a 15-year-old watching Villa in the FA Cup semi-final against Manchester United.To be playing in it five years later, starting in it, playing a part in both goals…”

The final was a disaster, a 4-0 thrashing by Arsenal, although he says: “Not hard to take, not really. Rewind six weeks earlier, we were second bottom in the league. Now we’ve stayed up and been in the Cup final.

“I can’t explain how good that would have been to walk up those steps, winning the FA Cup at 19. The medal’s at home. It’s a prized souvenir but I’d rather it said ‘winner’ than ‘loser’.”

Grealish equalled his great great grandfather Billy Garraty’s achievement of getting to the final with Villa, but Billy won it in 1905 and also got a full England cap.

So, there is still family history to live up to. There’s pressure, too, to get Villa back up, something that is trickier now than it was before Christmas after four league games without a win.

“We were the first Villa team to get relegated in how long (29 years)?” he says. “I never knew what pressure was or what nerves were. Over the last year, it’s got tougher, but that’s the side of it you’ve got to try and block out. I try and see it as a Sunday league game when I was a young kid.

“I’ve got to put right being relegated. Being a Villa fan – that is extra special for me .You have to stand and face it and put it right.

“The experience has helped me mature. For a player, you get relegated and that’s it. What I didn’t realise was how many people lost their jobs.

“People that I knew. People who have been here all their lives were getting sacked because of how we were playing on the football pitch. We weren’t doing it on purpose but it was just not a nice place to be.”

Middlesbrough have shown interest in taking Grealish to the North East and back into the Premier League. But they have not made a bid and Grealish won’t be making the move.

When he first went on the Villa pitch, he was 14 and his team had beaten Blackburn to reach the League Cup final. “That’s about my earliest memory,” he said. “We got through to Wembley. It was unbelievable. I remember grabbing some of the grass and bringing it home.”

He admits he has been stupid, but he is a boy in a superman world. He would have benefited from more help from a club that has seen a whirlwind of 12 managers come and go since Grealish was born in 1995.

He’s played against star names, does he feel part of that? “I’m way off that,” he added. “They are such talented footballers. They keep their consistency game after game. That’s what I’m striving to be.”

*This article originally featured in The FLP’s 29 January 2017 edition. Pick up your copy every Sunday for £1.50. 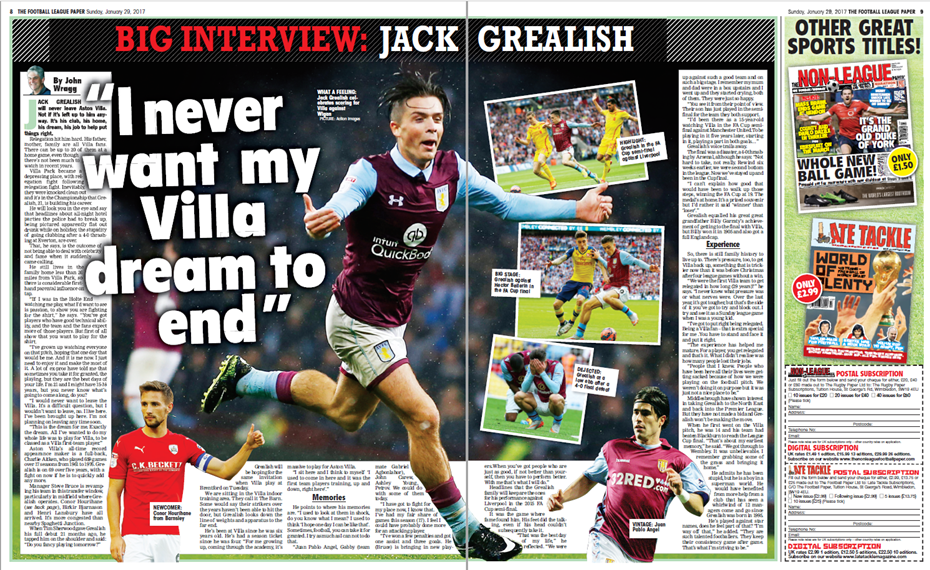