Lionesses get set for Spain date with Euros on the horizon 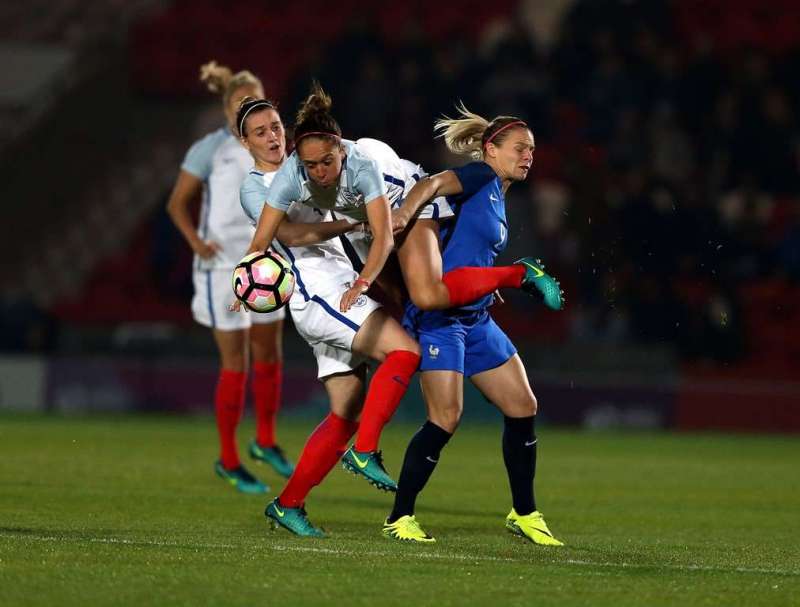 England have stepped on to a learning curve that can take them all the way to European Championship glory, says midfielder Jade Moore as Mark Sampson’s team prepare for a meeting with in-form Spain in Guadalajara on Tuesday.

Moore helped England battle to a goalless draw with France, the world’s third-ranked team, at Doncaster on Friday in what was the first of a tough programme of friendlies lined up ahead of next summer’s Euro finals in the Netherlands.

Bad memories of Euro 2013, at which England lost to both Spain and France as they tumbled out at the group stage – resulting in the sacking of coach Hope Powell – have been put behind them insists Notts County player Moore.

They have played against France four times since, losing the first two outings then drawing the last two. But on Tuesday they will face Spain, who are on a 12-match unbeaten run, for the first time since that ill-fated 2013 tournament.

“The last Euros are dead and buried as far as the players are concerned,” said Moore. “We’ve put them to one side and moved on. A change of management has helped, but we don’t look back, we learn from our experiences and look forward.

“We showed on Friday we can compete with France. We knew they always start games very strongly, so we set our stall out to weather that storm and build from there. Everybody had to put in a real shift, and that’s exactly what we did.

“We built on that in the second half, passing the ball better and looking to create some goalscoring opportunities. We wanted to win the game, but the performance has given us a platform to build on moving forward.

“It was the start of our journey to Euro 17, a learning curve that we’ll continue on Tuesday with a different kind of test against Spain. They’re another top team we might face at the Euros, so it’s another chance to compete and learn.”

Spain are unbeaten since last year’s World Cup finals, where, like England at Euro 2013, they crashed out at the group stage and subsequently sacked their coach. Under new boss Jorge Vilda they have improved vastly, as results show.

Sampson, whose fifth in the world England team are now unbeaten in eight games, said of his 14th-ranked opponents: “Spain are very tactical, very talented in the forward areas and they qualified for Euro 17 in real style. They’re starting to join the elite band of women’s football teams and we’ll have to produce a big performance to win there. We’ll have to adapt a few things (from the France game) and have a tweak in tactics, but we’ll be ready.”

A tweak in tactics should not affect the position of Moore, who was the team’s midfield anchor as a bronze medal was achieved at last year’s World Cup finals and should fill the same role at the Euro finals.

“I think my game’s improved over the last few years,” said Moore, who celebrated her 26th birthday yesterday, “but so has the rest of the team. We’ve got a very talented squad and the belief we’ve got from the World Cup is massive.

“Now we’ll be expected to do well at Euro 17, and playing against the big nations as tournament preparation can increase that belief. So Tuesday’s game against Spain is another important one for us on the road to the finals.

“If we get the result we want we’ll be in a good mindset for our game against Holland next month and for the rest of the build-up. I’m feeling hugely optimistic and I know we’ll go into the finals feeling confident we can make a real impact.”