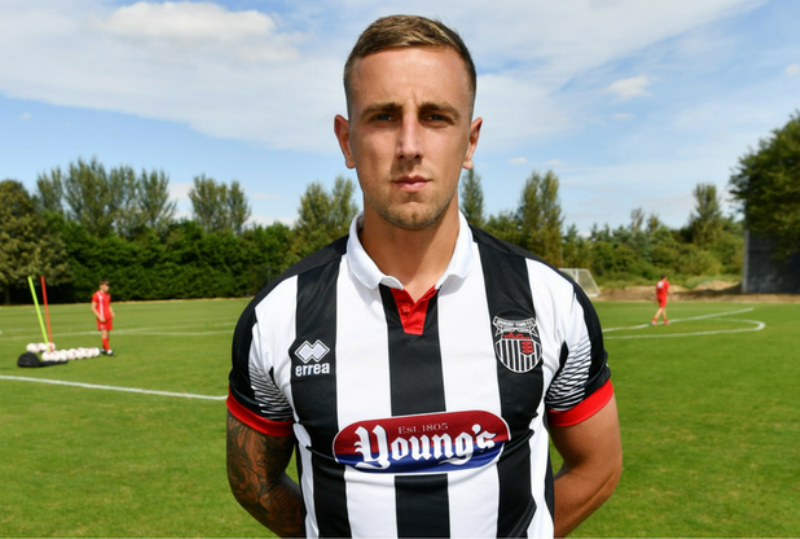 TEN goals in half a season for FC Halifax Town saw Shaun Tuton labelled as the next Jamie Vardy and earned him a move to Barnsley but, six months on, he’s trying to re-establish himself as a Football League player with Grimsby.

For Tuton, pictured right, it’s been a whirlwind year – he only joined the Shaymen from Evo-Stik side Buxton in the summer of 2015, but in the National League he made an immediate impression, scoring ten goals in 24 games, following in the footsteps of Vardy – who was prolific at the West Yorkshire club in 2010-11.

That spell for Tuton was enough to get snapped up by Barnsley, but while they went on a dream run last season to go from relegation strugglers to the play-off winners, it meant chances were few and far between.

Still, six months in the Football League showed Tuton exactly what it takes to crack it at this level, and he’s confident he can deliver with the Mariners after joining on a season-long loan on deadline day.

The first task will be winning over manager Paul Hurst, and Tuton explained that he’s settled in quickly.

“I got about eight or nine games for Barnsley last season off the bench, but some of them were only one or two minutes so I want to get some game time now with Grimsby.

“I’ve spoken to the gaffer and he’s told me just to relax and enjoy myself. I’ll be working hard to make an impact as quickly as possible.

“I only played five months at Halifax, and then moved to Barnsley last January.

“When I got there they had been struggling but they were just on the up and then they went on a great run, so it was hard to prove myself.

“I’d been training one morning and two evenings a week so it was a bit of a shock going full-time. But it’s really helped my fitness and sharpness.

“Training full-time, I think that’s what my football was missing.

“It was a big step up from the National League to League One, definitely bigger than from Evo-Stik.

“But now that I’ve got used to it, I want some games.”

Now 24, the comparisons with Vardy were obvious. Both made their name in Non-League, including spells at the Shay, before getting a shot in the Football League.

For some being ‘The next Vardy’ would have been a tough tag to cope with, but Tuton believes it has helped him.

“I used to follow him week in, week out with Halifax and he’d obviously come from the lower leagues as well,” he added.

“You keep an eye on what he’s doing in the Premier League but for me it’s not intimidating to be compared to him.

“It just gives me some confidence to know people are talking about me like that, it helps me. Perhaps there was a little bit of pressure when I got to Halifax, people asking who is this guy, but you have to deal with it.”