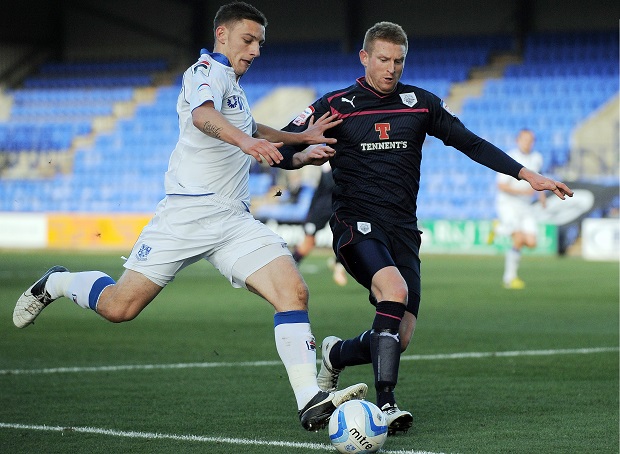 PRESTON full-back Scott Laird has called on his team-mates to repay Joe Garner for his goalscoring heroics – by firing the Lilywhites to promotion without him.

Garner, 26, has hit 31 goals in his last 48 games for Preston, and is currently the third-highest scorer in League One.

However, the former Nottingham Forest man is now facing up to four months on the sidelines after damaging tendons in last weekend’s victory over Bristol City.

It is a devastating blow for Simon Grayson’s side, compounded by Aston Villa’s decision to recall Callum Robinson. But Laird says the injury provides Preston’s players with an opportunity to prove there is more to them than Garner’s goals.

“It’s undoubtedly a blow,” admitted the former Stevenage man. “Joe is one of the best players I’ve played with. He’s an absolute animal.

“But his misfortune creates opportunities for others. We’ve got a great squad, one of the best in the league. We need to use this as inspiration now. Garns has done so much for us. Now it’s time for us to repay the favour by standing up, chipping in and making sure that when he comes back we’re in a good position.”

Laird was, though, happy to admit that Garner’s quality – as both a scorer and a target man – will be missed.

“He’s got a great leap on him and his timing is perfect,” added the 26year-old. “He’s one of those who just seems to hang in the air. The biggest thing about him is that he’s a pain in the arse. He’s always there, he’s always hassling, he’s always kicking at your heels or jumping into you.

“And he’s not afraid to get hurt. He’ll get kicked in the face, he’ll get head-butted or elbowed, but he’ll still get his head to the ball. That’s a big part of the reason he gets so many goals – he’s braver than anyone else.

“That’s what’s so ironic about the injury. He didn’t get it doing any of that. He just landed awkwardly.”

Laird knows all about injuries. Just six months after joining Preston from Stevenage in May 2012, the defender broke his leg in a challenge with Notts County’s Jamal Campbell-Ryce.

And though he recovered in time to play last season, he now admits that he was nowhere near his best.

“They always say that for however long you’re out, you can add that much again to get match fit and it’s true,” adds Laird, who had scored four goals and made ten assists in the 24 games before injury struck.

“I had the full season last year, but it took me all of last season to get back in the swing of things. It wasn’t until the last two months that I genuinely felt back to my best.

“But I’m over it now and looking to kick on.”