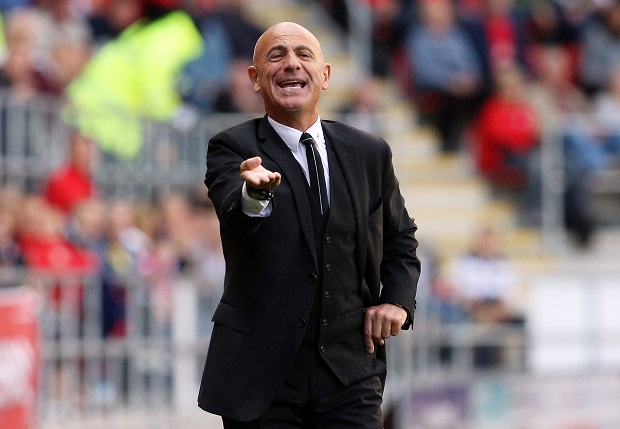 Sannino, 57, quit on Sunday, just hours after a 4-2 win over Huddersfield left the Hornets second in the Championship. The Italian – who took over from Gianfranco Zola in December – said he had “gone as far as I can”.

He is replaced by Spaniard Oscar Garcia, who last season led Brighton & Hove Albion into the play-offs before resigning in May.

The upheaval follows weeks of unrest behind the scenes with suggestions that Watford’s players were unhappy with Sannino’s training methods and inability to communicate in English.

However, Irish international Andrews insists the headlines are wide of the mark and that none of the players had a problem with Sannino.

“I’ve seen a lot of things in the Press and on TV,” said the 33-year- old. “Certain people want to make headlines and when a manager leaves with his team second in the league, people start digging around for reasons why.

“One of the things they’ve gone for is player revolt or player unrest. But that couldn’t be further from the truth.

“He was a good manager. His English was fine. He more than got by. I’d suggest he was a traditional, old-school Italian manager who believed in hard work and discipline.

“His record speaks for itself – we’re in second position. I certainly didn’t have a problem with him and I don’t think anybody else did.

“And ultimately, it was his decision – everybody could see that he resigned. If people want the truth, they need to ask Mr Sannino what happened.”

Former Barcelona midfielder Garcia wasn’t universally popular at Brighton, with many fans finding his possession-based style too pedestrian and defensive.

But Andrews – who spent last season on loan at the Amex from Bolton – believes the 42-year-old, back from a second spell in charge of Israeli giants Maccabi Tel Aviv, will be a different beast at Vicarage Road.

“You’ve got to play the hand you’re dealt,” said Andrews, who is spending a second season out on loan from the Reebok.

“The Brighton squad he inherited last year had good players, but I’m sure he’d have liked to add to it. And if anything, it got depleted as the season went on, especially in the January window when he lost a couple of players. His hands were
tied to a certain degree and I think that played a part in why he left.

“Yes he likes to play a possession-based game, but with the wingers and forwards here – Ikechi Anya, Lloyd Dyer, Fernando Forestieri – we’ve got pace and potency up front. I think we could see a different style this year with a lot more emphasis on offence.”

Andrews – who made 31 appearances for the Seagulls last term – insists Garcia will have instant respect from Watford’s players.

“He rarely loses his head. He has great respect for his players and he expects that in return.

“And he’ll get it. He has a great pedigree having come through the Barcelona academy and played for the team.

“He’s also been brave enough to challenge himself in a different country. How many people would have gone to manage in Israel?

“He could have stayed at Barca for a number of years but he took himself out of his comfort zone, proved himself, then uprooted himself again to manage in England.”