Home / Featured / Alex Nicholls Has Screen The Back Of Injury Nightmare

Alex Nicholls Has Screen The Back Of Injury Nightmare 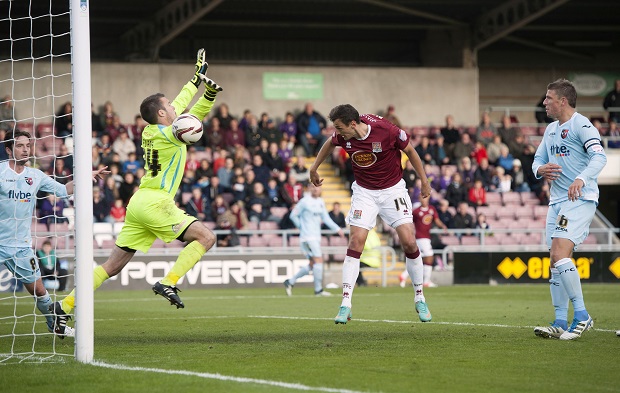 LESSER men than Alex Nicholls may well have turned their back on football following a horrific double leg break in October 2012.

The Northampton striker required an ambulance to enter the Sixfields Stadium pitch and it resulted in 22 months on the sidelines.

Many a lonely hour were spent on the sofa with his foot up, but the 26-year-old put the time to good use by re-running DVDs of his goals helped to wipe away any thoughts of retirement.

Now, having signed on loan for Exeter City, Nicholls is determined to get back to what he does best. On 27 October 2012, as Nicholls opened the scoring for Northampton against Port Vale, he was on the wrong end of John McCombe’s challenge, with the defender desperate to keep the ball out of the net.

The former Walsall forward suffered a compound fracture of his fibula and tibia, required a nail to be inserted into his left leg to begin the repair work and underwent a skin graft.

His competitive return to action came in a 14- minute cameo in the Cobblers’ Capital One Cup defeat to Bournemouth last month – a moment he’d dreamt of during his tortuous rehabilitation.

“The thought of playing football again kept me motivated,” says Nicholls. “I just wanted to get back to playing the game I love so much.

“You do have moments when you’re out for that long that you don’t want to get up and go to the gym, that you can’t see a light at the end of the tunnel.

“It was a difficult time, but I had to stay as positive as I could and, fortunately, I have a very supportive family who helped me every step of the way. Now I’m back and I want to start scoring goals again.

“I used to watch DVDs of myself playing. It was a big help. I would put them on the laptop and that did kick me into gear.

“I will definitely appreciate every moment of my career that much more now. I will never take another day’s training for granted again.

“I can remember being at Northampton as the boys were about to go out for training, it was absolutely pouring with rain, but I was so desperate to be out there with them. I am so pleased I can again.”

Nicholls moved to League Two strugglers Exeter on deadline day, initially signing a month’s loan deal. Grecians boss Paul Tisdale described the Stourbridge-born player as a “risk worth taking”, with doubts naturally over how much of the club’s packed September schedule he will be ready to take part in.

Nicholls accepts that he has something to prove, but insists his injury problems are a thing of the past.

“I haven’t missed a training session since the start of pre-season,” Nicholls said. “From the first friendly I never for a second thought: ‘I can’t tackle, I can’t challenge, I might get injured again’. That’s in the past now.

“I understand there might be question marks over my fitness with games on Tuesday, Saturday, Tuesday.

“But it’s up to me to prove to people that it won’t be a problem. I just want to get back on the pitch and be involved in League football and get as many minutes as possible under my belt while I’m at Exeter.”