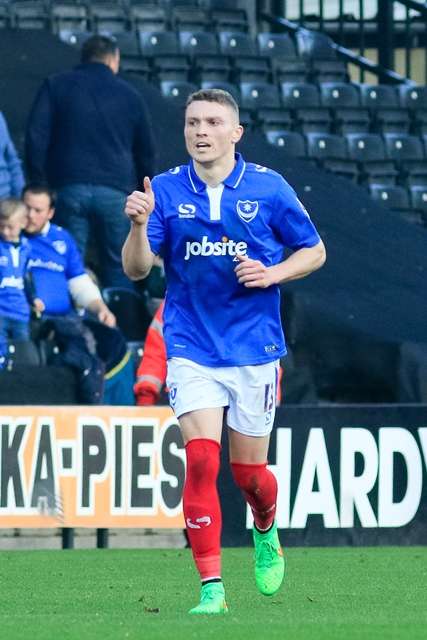 CAOLAN Lavery is determined to fight for a place in Northern Ireland’s squad for Euro 2016 – and believes linking up again with Portsmouth boss Paul Cook gives him the best chance to capture one of Michael O’Neill’s golden tickets to France.

With his playing chances limited at parent club Sheffield Wednesday,  Lavery was eager to get out on loan.

He received plenty of offers to get some much-needed minutes under his belt – and the Canadian-born forward opted for a switch to League Two high-flyers Portsmouth for three months.

Lavery had played under current Pompey boss Paul Cook during the previous campaign whilst on loan with Chesterfield.

He told The FLP: “I had some offers from clubs in higher divisions, but I know the coaching staff here pretty well so I took the decision to meet up with them again, and just try to play some games.

“It’s always nice when you go into a club and you know the manager and the way he likes to play. I would say it was quite a big factor in the choice I made.

“He’s got a good track record in management and it was just enjoyable to play under him last season, so I wanted to do it all over again.”

The 23-year-old is currently enjoying life on the south coast and registered his first goal for the club in their  2-1 defeat at Notts County last weekend.

Despite the loss, Lavery has been impressed by the squad since signing in mid-October.

“The quality is fantastic,” said Lavery. “It’s a very good team with very good players, and the training is quality every day.

“People might look at it and think it’s only League Two but that doesn’t matter when we have a squad like we do and the training is intense.

“I know we were beaten last weekend but, with the quality in the squad, I don’t see why Portsmouth can’t go ahead and get promoted this season.

“With the football that the gaffer has us playing at the minute it’ll be tough for many teams to deal with.”

Although he is yet to earn his first international cap, the 2015-16 season could be one of the biggest years of Lavery’s career with the opportunity there for the striker to muscle his way into O’Neill’s squad.

“The manager brought me in initially over the summer and just said ‘Here’s your chance, show me what you can do’, and luckily I ended up being able to stay involved with the team when he sent a few other boys on their holidays,” he said.

“It was great to be around and see what a happy environment it was, but he’s told me that I need to be playing games on a consistent basis to have the best possible chance. That stuck in the back of my mind when I made the decision to join Portsmouth.

“As a kid, you grow up watching the World Cup and the European Championships and you hope one day you’ll get the chance to do it yourself.

“Northern Ireland have qualified now, and I got a brief taste of being involved with the squad in a few of the qualifiers – it would mean the world to me if I could go away with them.

“I just need to focus on my game each weekend and hopefully my form can book me a place on the plane.”