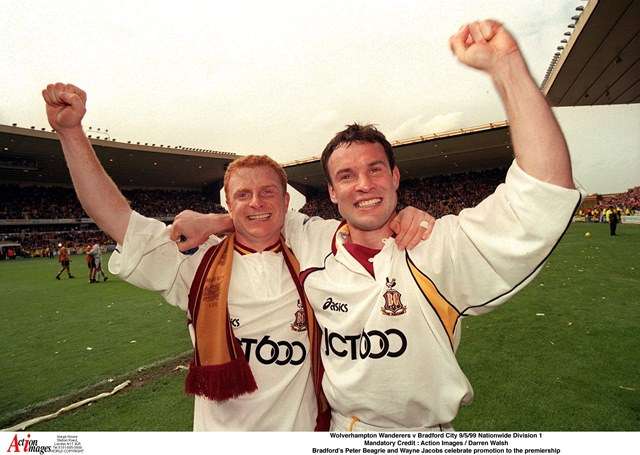 AS a tough tackling full-back for Hull City and Bradford, Wayne Jacobs could never be accused of doling out charity.

But, after hanging up his boots and turning his back on the dugout, that’s exactly what the 46-year-old is doing now.

Jacobs is the founder of One In A Million, a charity which helps disadvantaged children in his adopted home of Bradford.

But not so much that Jacobs couldn’t take half an hour out to look back on an 18-year journey through all four divisions. From being terrified into obedience by Sergeant Wilko to playing with a Sheffield Wednesday legend, the man from the steel city has plenty of tales to tell.

Sheffield Wednesday. I was born and raised in the city and had played for Sheffield Boys. In those days, you could sign schoolboy forms at 14, so that’s what I did. My dad had a pub and, on my 14th birthday, people from the club came knocking on the door and I signed there and then.

That was in 1985, under Howard Wilkinson. For a young lad he was pretty scary – very strong and sergeant majori-sh. He ran a strict regime, but, looking back, he instilled great habits in us all in terms of discipline and attitude.

Howard deserves a mention for his attention to detail. Eddie Gray at Hull was brilliant with young players. Chris Kamara’s enthusiasm was fantastic.

But, for what he achieved, I’d have to say Paul Jewell at Bradford. He’d been out on loan, worked in the background on the coaching staff. He was still registered as a player and nobody really expected him to make the step up so soon.

So, to get promoted to the Premier League in his first full season as a manager and then to keep us up in his second, it was incredible. 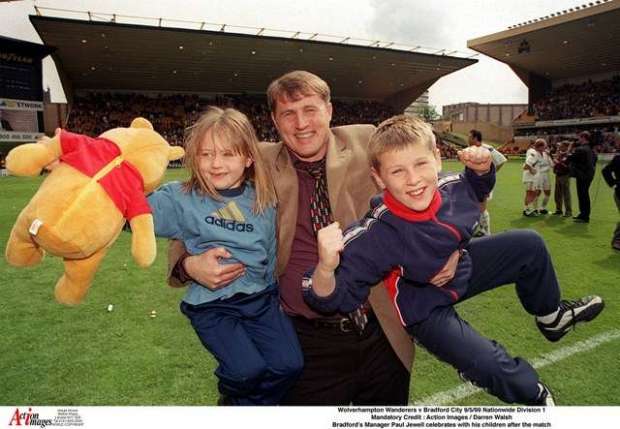 I enjoyed playing with Peter Beagrie down the left-hand side at Bradford. He was quick, he could shoot with both feet, cross off both feet. And, for commitment, passion and energy, nobody ever came close to our skipper, Stuart McCall.

But, growing up in the 80s and being from Sheffield, I’d always admired Chris Waddle. So, when he came to Bradford late in his career, it was brilliant.

His style, the speed he did those shimmies and step-overs! There’s a famous clip of him sitting Ryan Giggs down that tells you everything.

What I really liked about Chris – and you can ask anybody who knows him – is that he’s a really humble guy. He could easily have come into our changing room and gone ‘Oh, when I was with England’ or ‘When I played Milan in the European Cup’. But he’d never try to top trump anybody.

With Bradford into what is now the Championship in 1996. We beat Notts County 2-0 in the play-offs, which, if you can guarantee it, is the best way to go up. It’s every young lad’s dream to play at Wembley and I’ll never forget it. To make it even better, we’d only sneaked into the play-offs in sixth place!

Two really. One was a lad called Wayne Bullimore, a really funny kid I knew at Bradford. The other is John Dreyer.

John had the greatest nickname in football – ‘Tumble’ – and was the king of the anecdote. You’d get back after training and he’d always be sitting there, towel round him, holding court and telling story after story. I’m not surprised he’s done well as a coach because players will love him.

Back in my days at Boothferry Park, our front line was Billy Whitehurst and Keith Edwards. We’d been on an away trip and, in those days, there were no laptops or iPads. There weren’t even DVDs! We just had a telly and a video on the coach.

Anyway, the gaffer put the telly on and there was a Tommy Cooper stand-up show. So, the following Saturday, Billy and Keith spent the whole game shouting for the ball in the style of  Tommy Cooper.

It was all ‘Over ‘ere son’ or ‘Yeah, just like that’. The rest of us could hardly play for laughing at them.

Billy was a great character. Hard as nails and not the type you’d want to cross but brilliant to have on your side.  And I don’t think you’ll ever meet a more generous man. He’d give you his last 5p if you asked for it.

He knew every trick too. In those days, goalkeepers would always tape the top of their gloves, like a boxer. They couldn’t take them off.

So, whenever we won a corner, Billy would go and untie the keeper’s boots, knowing he wouldn’t be able do them back up.

You’d hear the keeper shouting ‘Ref, ref’ but he’d never know what was going on! He was brilliant like that.

Playing at Wembley has to be up there. So does getting promoted to the Premier League. And, beating Liverpool 1-0 to stay up on the last day – when they needed a win to reach the Champions League – takes some beating. I can’t choose between them.

Snapping my cruciate at Boothferry Park in 1992. I spent 17 months out and it very nearly finished my career. Hull actually released me and I had to fight my way back into football with Rotherham United.

I’d also say leaving Bradford in 2006. I’d had some fantastic times there and, to this day, I still live and work in the area. I had such an affinity with the club and leaving it behind – knowing it probably meant the end of my career – was devastating.

I did play a handful of games at Halifax as assistant to Chris Wilder but, truthfully, I knew my playing days were done.

There’s not really one that jumps out. I quite enjoyed the challenge of playing at places with fearsome reputations, like Millwall and Luton.

So, without being disrespectful, I’d probably say Bristol Rovers when they were playing at Twerton Park in Bath. Even for the era, it was a substandard setting for professional football. I felt sorry for their lads.

One from the early days was a big winger called George Lawrence, who played for Millwall and Bournemouth.  No matter how I tackled him, it would bounce off his shin or hit his knee and roll just perfect for him.

One from more recent times was Kieron Dyer at Newcastle. I remember playing against him up at St James’s in his pomp and he was so, so quick – absolutely jet-heeled. At the time he was going to be England’s next golden boy, before all the injuries.

As a left back, I played against some fabulous players in the Premier League – people like David Beckham – but none scared me like Kieron. He was just too fast. 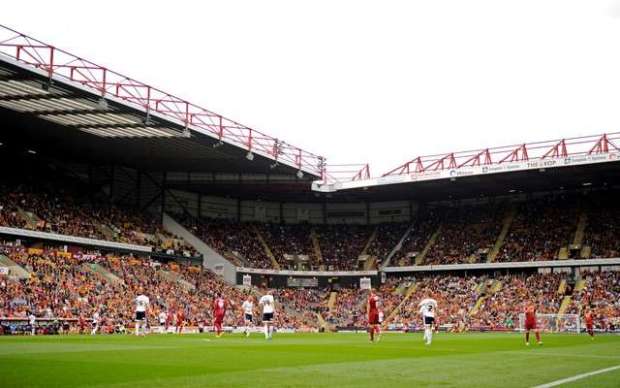 It would be easy to say Highbury or Old Trafford or Anfield. They’re all fabulous places, but there was nowhere like Valley Parade. When you’re playing well, it was packed and the fans were lifting the roof off – I used to love it and still do.

It’s all about the charity for me now. We’ve got two schools, an alternative education one and a secondary school. We’ve got community workers out and about.

We’re trying to create pathways in life for young people who have difficult circumstances outside their control. If we can make them confident and employable – and remove deprivation from their lives – that will mean as much as anything I achieved in the game.