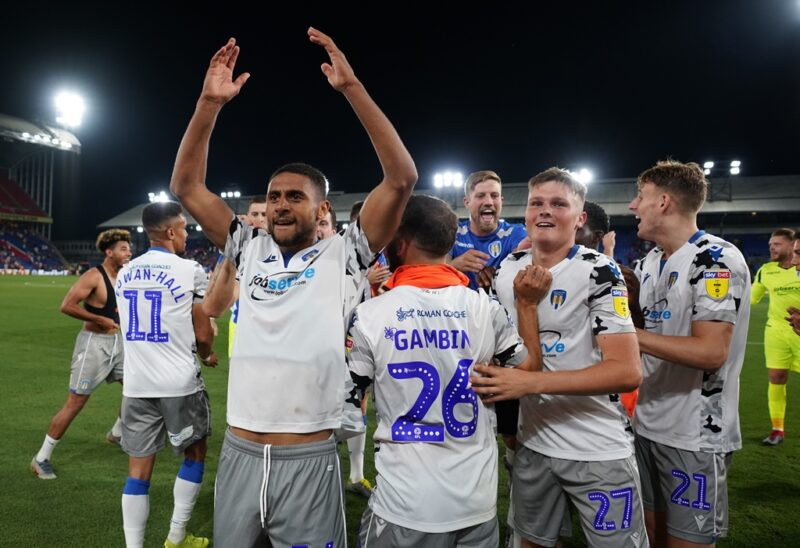 COLCHESTER United midfielder Brandon Comley admits he failed to get out of first gear last season, but now he’s motoring towards a Carabao Cup quarter-final against Manchester United at Old Trafford!

The 23-year-old has seized his chance in the U’s line-up this term, playing his part in their incredible run to the last eight which has already seen them take the scalp of Premier League duo Crystal Palace and Tottenham.

Their 3-1 victory at fellow League Two side Crawley in midweek booked their place in the quarter-final draw, which, strangely, took place on The Zoe Ball Breakfast Show on BBC Radio 2 on Thursday morning. For the best football accys and tips head over to https://www.mightytips.com/free-sport-predictions/football-tomorrow/

“I was on my way to football,” said Comley. “I ran into a bit of traffic, but I heard the draw on the radio – I was over the moon. It’s unbelievable to draw United.

“I didn’t really support a team as a youngster, but if Manchester United were playing in the Premier League, I would tend to support them.

“I’m just looking forward to the atmosphere, playing at a stadium you have watched on TV your whole life. It’s something you dream of and we have worked so hard to get there. It’s unreal.

“We have nothing to lose and we will give it our all.”

As for why John McGreal’s Colchester – ninth in League Two heading into the weekend – have shone on the knockout stage so far this term, Comley puts it down to a number of factors.

“It’s been a journey to say the least,” he laughed. “People have probably taken us for granted – Colchester in League Two. However, we are quite solid, we work hard and are a fit bunch of lads.

“Our keeper Dean Gerken has made some good saves and we’ve also had a bit of luck. The atmosphere in the team is electric – we’re all buzzing.”

Islington-born Comley came through the ranks at QPR but has had to head elsewhere to make him mark. He had loan spells at Carlisle, Grimsby and Colchester before joining the latter permanently in January last year.

He notched up 40 appearances in his first season with the U’s taking into account his loan and permanent games, but last season he was restricted to just 15 matches. He’s already surpassed that tally this term and feels he’s now getting back on track.

“Last year was a bad time for me,” he admitted. “I wasn’t playing and it was a weird feeling. I got injured on top of that and it was a down season.

“This year I’ve worked really hard, but I didn’t know if I was going to get more of an opportunity. We had a few injuries, I got in and I had to try to show what I could do. I think I’ve done that and I’m thriving off the opportunity to play.”

While the Carabao Cup run has hogged the limelight, it now goes on the backburner until mid-December. The U’s host Coventry in the FA Cup first round next Saturday and Ipswich in the Leasing.com Trophy group stages a few days later, but the league is their main focus.

“The cup games are nice, but the league is our bread and butter and we want to get promoted,” said Comley. “We’ve had a few blips, but we are heading in the right direction.

“We all sat down and said that Manchester United is a game in isolation and we’ll look forward to it when it comes around, but we want to push into the play-off places at least before then.”

Comley is also keen for more international caps with Montserrat, who he represents alongside his older brother James, who plays for Maidenhead.

“It’s a surreal feeling putting on the same shirt. We’ve never played in the same team before, and it’s a proud moment for our family,” added Comley, who qualifies through his grandfather on his dad’s side.

“It’s something that will live with you forever. I’m relishing it.”