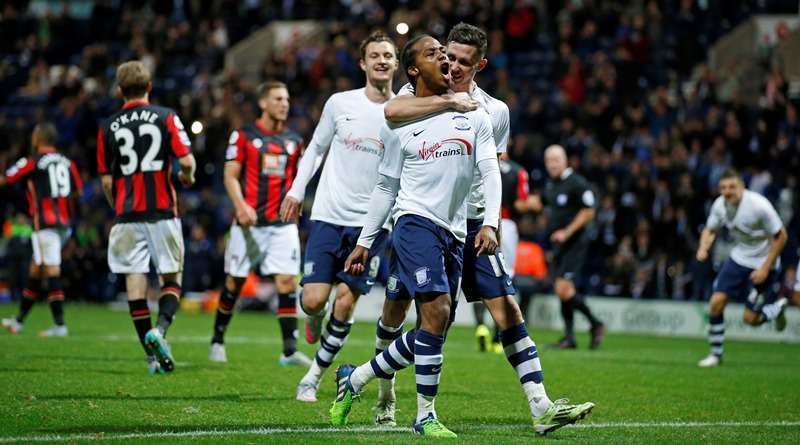 DANIEL JOHNSON insists he has firmly put his departure from Premier League strugglers Aston Villa behind him as he revels in a new role in the heart of the Preston North End midfield.

The Jamaican-born playmaker, 23, has been a relative steal for the Lancashire club after they landed him for just £50,000 in January 2015, with Johnson playing a pivotal role in their promotion to the Championship.

“I came into Preston halfway through the season, but I settled in really quickly,” Johnson told The FLP.

“I got myself straight into the team and I think I played my part with the goals, which is a massive part of my game.

“This last year has been great all the way up to now, and personally I’ll let it see where it takes me as I’m delighted with the way things have been going.”

Having moved to the UK at the age of seven from his home town of Kingston, Johnson was signed by Crystal Palace before being lured to the Midlands by the impressive set-up at Aston Villa’s Bodymoor Heath academy in 2009.

However, despite being picked up at just 17, Johnson was never given a chance in the senior ranks of the Premier League’s current bottom side.

“There’s obviously something going on among the backroom staff, but I’m not too sure what [it is] to be honest,” he said.

“They’ve always been a good club, to produce players like Barry Bannan, Ciaran Clark, Marc Albrighton. The list can go on.

“However, I’ve not really been that interested in following up on why it didn’t happen for me as I’m very happy where I am now.

“It’s a really big club and, for them to be talking about relegation is something you’d never expect in the past.

“There are still a lot of games to go and they might find the points to stay in the division.”

Another of those struggling to make the grade at Villa is Callum Robinson, one of Johnson’s best friends.

He has recently returned to Deepdale – and was, at first, a great companion for him when he signed last season.

“Callum and I go way back, all the way to our youth days at Villa, so it’s nice having him here,” said Johnson.

“But it’s not just Cal, I’ve connected well with all the lads here and it’s been really good as we’re all a tight-knit bunch.

“I think at the time this was the perfect club for me to join.”

From his hairstyle to his family traditions, Johnson is quite in touch with his Jamaican roots.

He has even considered representing his home nation at international level.

“The dreadlocks are just a thing that runs in the family,” he explained.

“I’ve always had them and, being from Jamaica, it’s a traditional hairstyle that has been carried on through the generations.

“I just want to concentrate on my club football at the moment, but I would be interested in thinking about the Jamaican international side in a year or so when I’m a bit more settled.”

Preston are on a good run of form, with four wins from their last four catapulting them up to ninth in the Championship.

Johnson believes it’s a result of quickly adjusting to their new surroundings in the second tier.

“We’ve always had the belief in ourselves that, within the team and the staff, we can achieve anything,” he said..

“Coming into this league we already knew it would be tough, and at the start we were playing well but not quite getting the results we really deserved.

“We had to get to grips with it really quickly, which we have, and now we are showing what we’re capable of by our position in the table.”