Home / Features / Martinez: Why I picked Molineux over learning under Petr Cech

Martinez: Why I picked Molineux over learning under Petr Cech 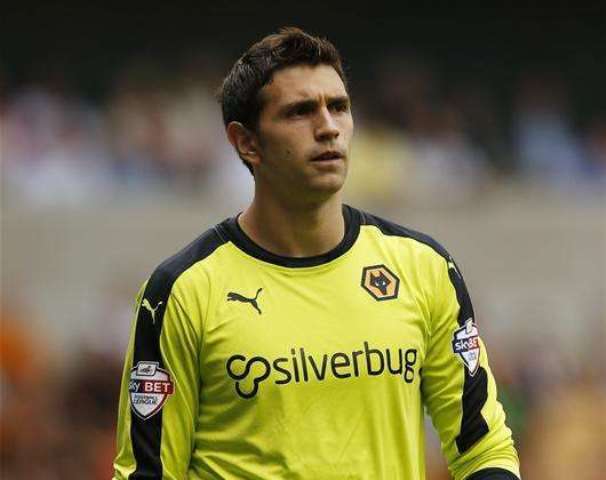 Not even the lure of learning his trade from Petr Cech was enough to keep Emiliano Martinez away from a full season at Wolves.

Martinez, who joined Arsenal from boyhood club Independiente in Argentina three years ago, may have seen Wojciech Szczesny’s Emirates Stadium exit this summer as an opportunity to make his mark in north London.

Instead, Cech arrived and the 23-year-old, who has enjoyed previous loan spells at Sheffield Wednesday and Rotherham United, made his way to Molineux.

Arsenal’s goalkeeper situation has been far from stable this season, as David Ospina’s howler landed them in Champions League trouble earlier this month – while former Bristol Rovers youngster Matt Macey was their back-up stopper for Tuesday’s clash with Bayern Munich.

But Cech was imperious that night and  Martinez admits a spot on the Gunners bench is nothing compared to a lengthy run in the side at Wolves.

“(Arsenal manager) Arsene Wenger wanted me to stay and learn from Petr Cech but nothing is better than playing week in, week out,” he said.

“Petr Cech is a legend and David Ospina as well. I will learn lots from them but nothing replaces playing regularly. That is how you learn and make decisions.

“It is a season loan and I’m really happy here. I want to stay here and get promoted.

“We wanted to improve in every area this year – competition in goal and all over the pitch. Everyone is thinking about promotion.

“I’m not worried about next season. I have to worry about this season and how we are going to do. Next season is another season altogether.”

Martinez was not short of options at the start of the season, according to the man himself, but Kenny Jackett’s side topped the list.

And that was in no small part down to Wolves striker Benik Afobe – the former Arsenal youngster having a persuasive word with his old mate.

“I had a few teams to choose from but Wolves were the main target because I knew Benik Afobe and he spoke so highly about the club,” said Martinez.

“When you go on loan it’s a bit hard but once you have settled into a team it is much better. It took me a little while – two or three weeks – to get settled.

“It’s hard when you don’t know the names of the defenders, but it’s good now. I knew Benny and he helped me out when I first arrived.

“He said they are the best team in the Championship, the facilities are amazing, the manager is great and the lads are very welcoming. 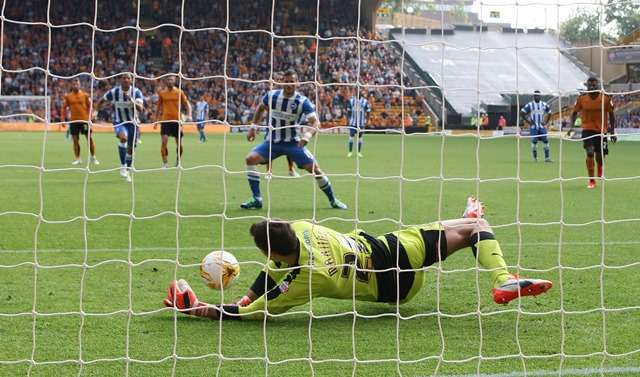 Hero: Martinez saves a penalty from Brighton’s Tomer Hemed in their 0-0 draw (Photo by Action Images)

“It has been really good. When you play week in, week out with these kinds of players, I really enjoy it.”

Martinez has been starting games but that situation is far from guaranteed, given the competition at the club – in the shape of Nigeria international goalkeeper Carl Ikeme.

“I need to perform in every game because Carl is a really good goalie,” he said.

“The gaffer said he had a really good year last year, but I came here to play every game. I got to know him and he is a really nice lad.

“I like the pressure and I like to compete. If you get the No.1 shirt too easily, you don’t perform well. When someone is pushing you, then you push yourself.”

And it is not just between the posts that Martinez has impressed – the youngster was caught on camera firing a volley into the top corner in a training drill earlier this month and the video went viral.

“I showed that keepers can hit the target as well,” he shrugged.

“I practise a lot and it is something I have in my locker.”