Stoke City midfielder Joe Allen has called for the FA to not take action against Bradley Johnson after he appeared to bite the Wales international in last night’s Championship encounter.

The pair clashed after Stoke’s Peter Etebo was sent off in the 33rd minute, with TV images appearing to show the Derby County midfielder clamp onto a chunk of Allen’s shirt.

But Allen backed up the words of Potters boss Gary Rowett for matters to not be turned into a controversy.

“It might look a certain way but he hasn’t bit me,” said Allen.

“He might have got a little bit of the shirt but nothing that I’m worried about and I don’t think it should go any further that that.” 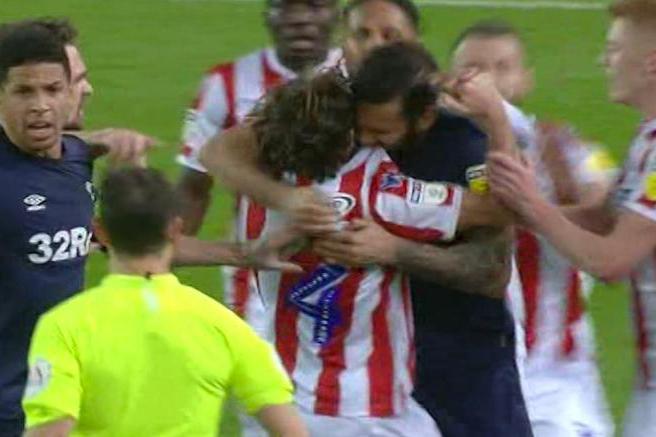 Both players were booked for their part in the incident with the FA likely to decide on Thursday whether violent conduct charges will be brought against Johnson.

And Rowett revealed after his side’s 2-1 victory over the Rams that he had placated the severity of Johnson’s actions to referee.

“Someone said originally that Bradley had bit Joe, but I think Joe said it wasn’t too bad. Certainly we’re not going to have any complaints.

“I spoke to the referee, saying it’s not a problem and we don’t want anything further to be looked at. To me, it was just part of a melee.

“Bradley is a great lad and a good professional and I’m pretty sure it wouldn’t have been. Joe said it wasn’t anything too serious. We won’t be making any complaints.”

Sam Clucas had given Stoke the lead before Etebo was given his marching orders after chopping down Richard Keogh.

Harry Wilson continued his impressive form for the Rams by netting an equaliser from a free-kick, only for Tom Ince to clinch the winner for 10-man Stoke shortly after the hour mark.