Posted on December 11, 2015 by Hugo Varley in Columnists, Features | 0 Comments 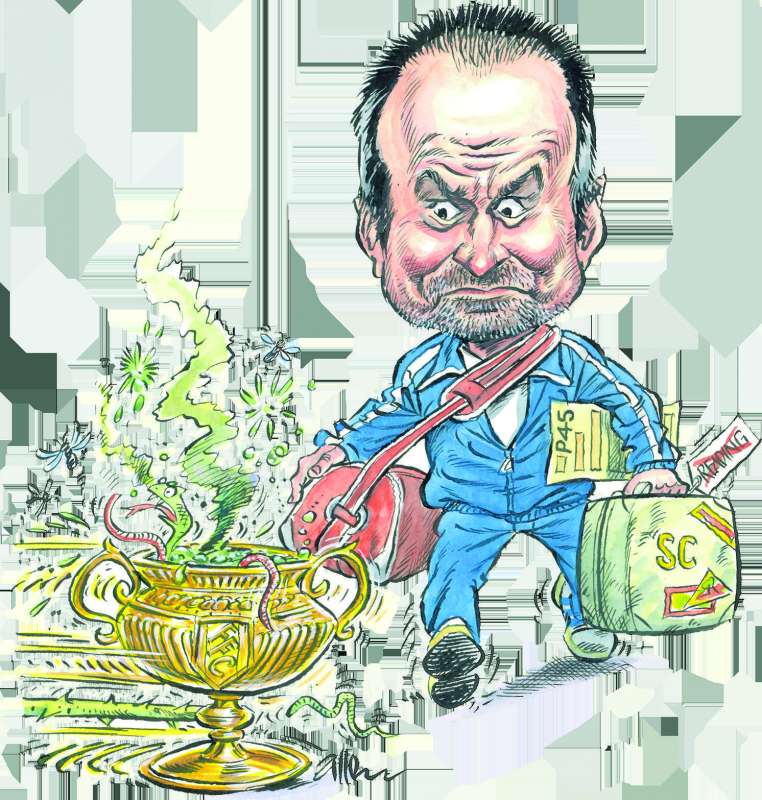 Poor Fulham. The way people are giving them the swerve, you’d think they were offering a day trip to Damascus, not a plum job in the Championship.

Gary Rowett gave them the finger. Gary Neville plumped for Valencia, Paul Lambert for Blackburn. Nigel Pearson even decided unemployment was preferable to a stint at Craven Cottage. When a guy would rather watch Jeremy Kyle than pocket a six-figure salary, you know something stinks.

And let’s not forget Steve Clarke. A fortnight ago, the Scot publicly rejected Fulham, saying Reading had “more potential”. Now, he is sacked by the Royals.

Had negotiations been kept under wraps, the Cottagers could quietly slip him a contract and pretend he’d been first choice all along. Now? Appointing him would be like taking back a love cheat. A sour, trustless relationship. What a shambles.

It’s three weeks since Fulham sacked Kit Symons. Three weeks since Mike Rigg, the Cottagers’ chief football officer and the man tasked with leading the search, spoke about the “luxury” of an international break.

Yet the West Londoners are no nearer making an appointment than the day Symons cleared his desk. So what’s the issue?

Fulham have a decent squad, a wealthy backer in Shahid Khan, the pulling power of recent Premier League status and a handy London location. Parachute money is dropping in. It should be a dream job.

And it is – just not for the calibre of manager Fulham are targeting. See, the Cottagers don’t actually want a manager. They want a head coach. A guy happy to sign off all control over transfers to the men upstairs and who will take what he’s given.

There’s nothing wrong with that. Guy Branston, currently head of recruitment at Notts County, argued very persuasively in favour of the continental model in these pages.

Even more compelling is the case put forward by Watford, whose promotion to the Premier League was far more reliant on a successful transfer strategy than any managerial mastery.

Change is coming and we’d better learn to embrace it. But it hasn’t arrived yet and, right now, English managers won’t cede their power without a fight.

Why did Mark Warburton leave Brentford? Why did Chris Powell clash with Charlton owner Roland Duchatelet? Why do Watford keep hiring foreign coaches?

It’s isn’t because they are more skilled. It’s because they’ll work under constraints that Englishmen like Powell and Warburton won’t tolerate.

If Fulham want someone to be Rigg’s underling, they need to lower their sights. Lambert, Pearson, Rowett: these guys have high enough stock that they will find an employer willing to give them the keys and the cheque book.

Attempting to sell them a coaching role is like Mercedes trying to tempt Sebastian Vettel away from Ferrari by offering him the chance to play second fiddle to Lewis Hamilton.

Yes, the car is faster, the pay a touch higher. He might even win a few more races. But would he choose that over Ferrari, a team where he is revered and treated as top dog? No chance. You can’t appoint first-class sportsmen and treat them like subordinates.  When Rigg kicked off this miserable search, he said he wanted a head coach with Championship experience and a track record.

Yet, as more calls go unreturned and CVs get lost in the post, those criteria increasingly resemble a pipe dream.

If Rigg wants Championship experience and a record of success, he needs to stop hunting for a head coach.

And, if he wants a head coach, he needs to rummage through the lower leagues, sift through the dole queue or pack his bags and head for the Continent.