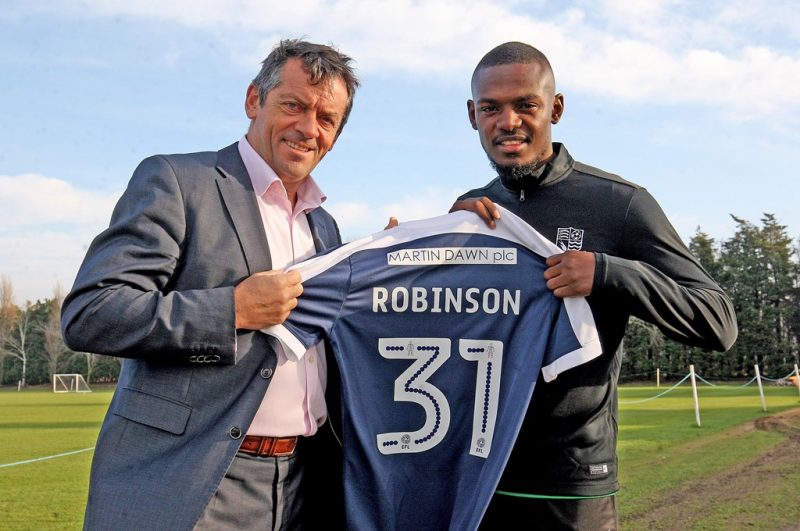 ON SATURDAY week, Theo Robinson will settle in front of the TV to watch Lincoln City battle Burnley for a place in the FA Cup quarter-finals.

He’d love to walk out at Turf Moor. Love to lead the line for Danny Cowley’s giant-killers. Love to put the Clarets to the sword just as he helped kill off Ipswich and Brighton.

With seven goals in seven games, the 28-year-old has done more than anyone to fuel the Imps’ remarkable rampage through the famous competition. Victory at Turf Moor would make Lincoln the first Non-League side ever to reach the last eight.

But after a deadline day move to Southend, Robinson will be just like the rest of us – an impotent spectator desperate to see a giant slain.

Given Lincoln’s position at the summit of the National League and Robinson’s pivotal role in their rise, you’d expect the former Huddersfield forward to have spent Tuesday wracked with doubt.

In fact, the decision to ditch Sincil Bank was made in an instant – and even the sight of his former team-mates walking out at Burnley won’t prompt a frisson of regret.

“I loved my time at Lincoln, I really did,” he explains. “But I didn’t have a contract. It was a month-to-month deal, basically.

“For anyone, that’s not a very stable situation. Injuries happen, and without a contract you’ve got nothing to fall back on. No money. No help.

“I was playing game to game, giving everything for LIncoln. But in the back of your mind there’s always that worry that something could go wrong.

“I’ve got a partner and two kids – one five months and another 22 months. They need financial security and, at my age, I couldn’t take risks.

“I got the call from my agent on Tuesday, telling me that Southend were interested. I spoke to (manager) Phil Brown, who said the club had offered a two-and-a-half year deal.

“I then had to make a quick decision with my family but we all knew it was an offer I couldn’t possibly turn down. Security for my family. League football for me. I couldn’t sacrifice that for the sake of a Cup run.”

FA Cup upset: Theo Robinson scores the Imps as they take Championship Ipswich to a replay in the third round (Picture: CameraSport)

So how did a player of Robinson’s calibre find himself scratching a Non-League living in the first place?

Capped seven times by Jamaica, the striker once played in the Premier League for Watford and has scored over 70 EFL goals for the likes of Huddersfield, Derby, Doncaster and, last season, Port Vale. His pace can terrify defenders at any level, as Brighton discovered last week.

“It’s been a whirlwind these last few years, and not in a good way” admits Robinson, who also spent part of last season at Motherwell and much of the summer on trial.

“This season I’ve changed agents, signed with Lincoln and tried to kick on from there. I knew I was in a situation where clubs could come for me at any time but I just tried to concentrate on what I was doing and put that stuff out of my mind. Thankfully it’s worked.”

For Robinson, it’s a case of third time lucky at Southend. A loan spell from Watford in 2008-09 yielded seven goals in 21 matches and a rejected bid to seal a permanent deal.

Then, this summer, a fortnight training with Phil Brown’s side failed to result in a contract – a decision the Shrimpers boss now regrets.

“It was one of those things where the circumstances weren’t right but it’s nice to know he liked what he saw,” adds Robinson, who joined a side just two points outside the League One play-off places.

“I saw first-hand the quality of these lads in the summer and they’re doing really well. Hopefully I can slot in and add a bit of pace to the squad.

“Last time I was here I think we missed out on the play-offs by a couple of points, so hopefully I can go one better now.

“That’s the aim, and we’re not that far away. I’ve played at that level and I’ve proved in the FA Cup that I can still play at that level by scoring goals against Championship opposition. My confidence has never dipped.”

Back to the Cup – will Robinson be rooting for his old friends?  “Of course,” he says. “I still watch out for every single club I’ve played for. But I’ve got a couple of friends who play for Burnley so I’ll have a foot in both camps. I know Jeff Hendrick from Derby and Scotty Arfield from my time at Huddersfield. I’ll be torn, but I’ll be backing Lincoln.”