Where Are They Now? Oxford United 1986 Milk Cup Winners 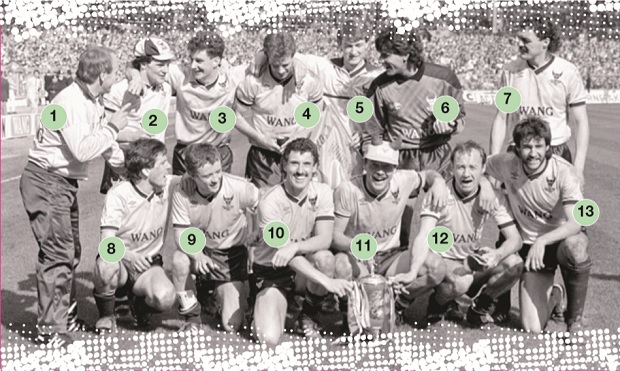 LES PHILLIPS was part of the Oxford United side who, under the combined efforts of owner Robert Maxwell and manager Jim Smith went from Division Three to League Cup winners in three successive seasons.

Oxford were crowned champions of Divisions Three and Two to take their place in the First Division for the first time in their history.

But within days of reaching the top flight Smith left the club to join QPR after failing to agree a new contract with Maxwell. Phillips, a part of both promotion winning sides after joining from Birmingham City, believes more should have been done to keep him at the club.

“We were in Portugal and Jim was there – then all of a sudden he was gone and we didn’t know what was happening.

“Robert Maxwell should have given Jim anything he wanted to keep him at the club because of what he achieved.

“Jim leaving was a downer because we were looking forward to playing in the First Division with a fantastic manager and a team really on the up.”

Maxwell decided to appoint Maurice Evans, who had been chief scout and youth development officer, as Smith’s successor. It was a huge gamble and one that ultimately paid off as Oxford stayed up thanks to a 3-0 win at Arsenal on the final day of the season.

But it was in the Milk Cup that the club were to leave their mark, beating Northampton, Newcastle, Norwich and Portsmouth to reach the semi finals.

And a 2-1 victory in the semi final second leg at home against Aston Villa took them through 4-3 on aggregate to face, of all people, Smith’s QPR. Favourites In the final Trevor Hebberd, Jeremy Charles and Ray Houghton scored in a 3-0 win in front of 90,396 at Wembley Stadium.

“Winning the Milk Cup went beyond what we thought we were going to achieve,” adds Phillips.

“But once we knew we were playing QPR I thought we were the favourites.

“We did play really well but QPR didn’t performed on the day. I never saw Jim Smith so down after a game. It was his team that had really beaten them.

“English teams were were banned from Europe at time so we had to take that on the chin.

“Ray Houghton and John Aldridge played international football but for the rest of us to play against the best in Europe would have have been something else.”

1. Ray Graydon: He managed Walsall and Bristol Rovers and now lives in Southampton and works for the Premier League

2. Ray Houghton: He went into the media and has worked as a pundit for a variety of outlets including ESPN and RTE in Ireland and on radio with TalkSport.

3. John Aldridge: Managed Tranmere Rovers, has also owned a pub in Liverpool and works as a media pundit on Merseyside.

4. Trevor Hebberd: Settled in the Leicestershire area and has worked for steel merchant in their warehouse.

6. Alan Judge: The U’s oldest ever player became a goalkeeper coach at Oxford and Swindon. Lives in Bicester and runs a driving school.

7. Gary Briggs: He has settled in Bispham on the Fylde coast and has worked as a caretaker and a civil servant.

9. Les Phillips: Works for a building company in Oxfordshire, and has scouted for the club and worked as a greeter at the Kassam Stadium.

10. John Trewick: Has worked for a number of clubs in various coaching capacities including as Hereford United manager and a senior coach at Shrewsbury.

12. David Langan: Lives in Peterborough. Has been employed in the security industry, now works as mayor’s attendant at Peterborough Town Hall

13. Jeremy Charles: Son of Mel and nephew of John. Coached at Swansea and Saints, ran coaching schools in Oxfordshire, is a computer software engineer in Oxford.

14. Steve Hardwick: He has settled in Huddersfield and works as a groundsman for Hoylandswaine Cricket Club.

15. Peter Rhoades-Brown: Is still working for Oxford as business development manager after a spell on the community programme.

16. Gary Barnett: After a stint as Jan Molby’s assistant at Kidderminster and then Hull he became a personal trainer in Gloucestershire.

17. Mark Jones: A director of Oxfordshire-based Premier Soccer Centres which he started after leaving the U’s in 2003.

18. Billy Hamilton: Settled back in his native Northern Ireland where he set up a trophy business in Bangor, while also working as a media pundit.

19. Brian McDermott: Worked his way up from chief scout to manager of Reading and then went on to take charge of Leeds United until May 2014 .

20. Neil Slatter: He returned to his native Cardiff where he joined South Wales Police and is serving as a Detective Constable in Cardiff CID.