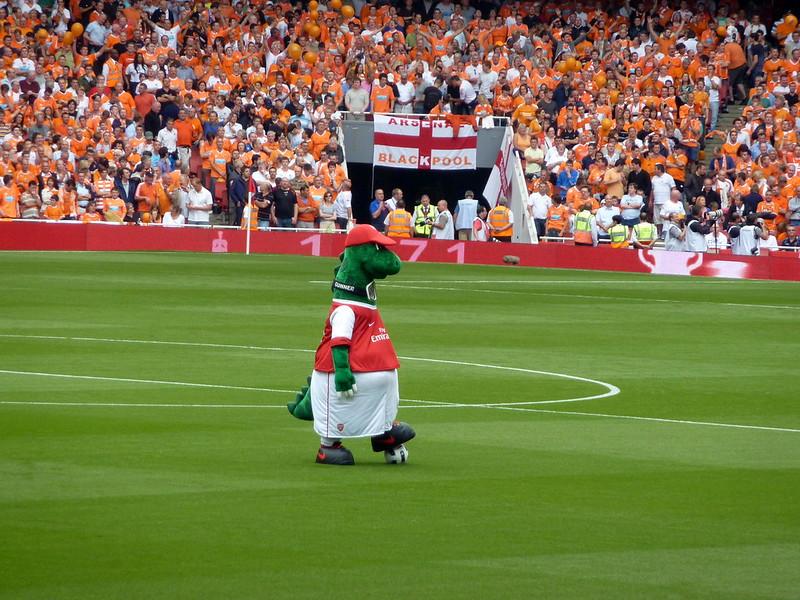 Football can be a ruthless, cutthroat occupation. It’s a results-driven business and there’s a price to be paid for failure. Managers are sacked and players are transferred all of the time.

Mascots, though, generally weren’t required to harbour fear that the axe is hanging over their neck, waiting to deliver the chop. Well, at least they never needed to worry about that in the past.

Now that one of the most famous of all English football mascots was handed his walking papers, perhaps all of the costume characters who populate stadiums across the country, entertaining young and old alike, might want to be looking over their shoulders to be sure that the Grim Reaper isn’t coming for them.

The COVID-19 pandemic recently claimed another victim at the Emirates Stadium. Arsenal shocked the football community with the news that the Premier League side had sacked Gunnersaurus, the team mascot.

“The pandemic represents one of the most challenging periods in our 134-year history,” the club said in a statement. “We know this is upsetting and difficult for our dedicated staff and our focus is on managing this as sensitively as possible.

“Our aim has been to protect the jobs and base salaries of our people for as long as we possibly can. Unfortunately, we have now come to the point where we are proposing 55 redundancies.”

One of those redundancies was Gunnersaurus.

Gunnersaurus came to life in 1993. Arsenal ran a contest through its Junior Gunners program to design a club mascot. Peter Lovell, 11 years old at the time, came up with the winner – a dinosaur he sketched and dubbed Gunnersaurus Rex.

Jerry Quy has been the man in the costume for all 27 years but he was doubly hit by the pandemic cuts. Quy also lost his job as an Arsenal supporters liaison.

Arsenal Criticized For The Move

Former players and prominent politicians were among those who lashed out at Arsenal for the decision to cut the popular mascot. Gunnersauraus has over 100,000 followers on Instagram.

“There will be 30 and 40-year-old fans who have grown up with that dinosaur,” Gunners legend Paul Merson told Sky Sports. “It’s disappointing, I think it’s poor by Arsenal, I really do.”

Through a spokesperson, Sir Keir Starmer, leader of the Labour Party, also was harshly critical of what he admitted was his favorite club.

“Keir is a passionate supporter of Arsenal and he was disappointed by the club’s decision,” the spokesperson said. “Football is our national sport and all football clubs should send messages of solidarity – particularly to people during this difficult time.

“Keir believes people will take a dim view of clubs that are spending millions of pounds on transfers on the same day they are making hardworking staff redundant.”

“I was so sad that Jerry Quy aka our famous & loyal mascot @Gunnersaurus and integral part of our club was being made redundant after 27 years,” Özil tweeted.

“As such, I’m offering to reimburse @Arsenal with the full salary of our big green guy as long as I will be an Arsenal player.”

Off To Good Start

The EPL season is going well for Arsenal despite the mascot controversy. At 3-0-1 through four matches, the Gunners are level second in the table with three other sides.

It might be a good time to think about signing up with an online sportsbook to place a wager on Arsenal. But before you do, shop around to ensure that you get the best signup bonus from the sportsbook you end up choosing.

To be fair, with empty stands, there’s little for a mascot to do on match day. A mascot without fans is like Benny Hill without a bald fellow to slap on the head. It just isn’t the same.

There’s even a glimmer of hope that Gunnersaurus could one day be resuscitated from extinction.

“Gunnersaurus is not extinct and will return to action when fans are allowed back at matches,” an Arsenal spokesperson said.