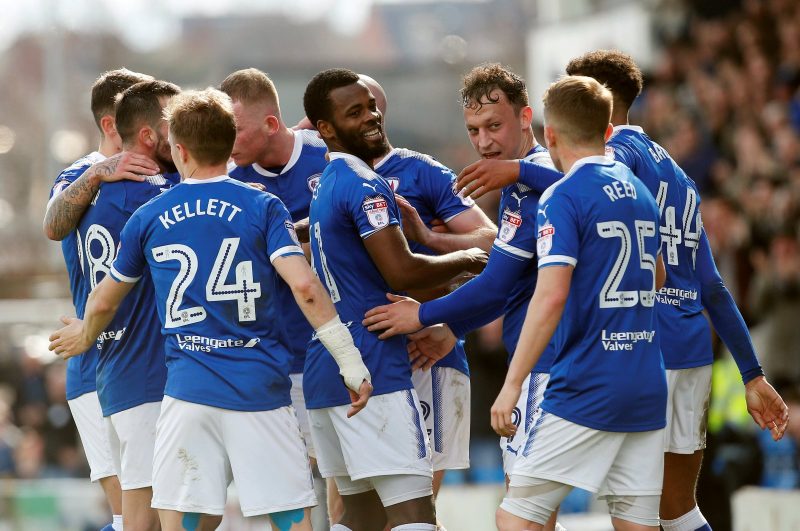 It was another action packed weekend in League Two, which had implications at both ends of the table

The race for automatic promotion….

Luton leapfrogged Accrington to go top of League 2 after securing a routine 2-0 victory at home to bottom of the table Barnet. Danny Hylton put the Hatters in front at the start of the first half when he eased into the box to head home from close range. Luton’s lead was doubled with just over 20 minutes remaining as James Collins hit a brilliant volley to net his 19th goal of the season.

Third placed Wycombe missed the opportunity to gain a firmer hold on the final automatic place as they were held to a goalless draw at home to struggling Port Vale. Vale goalkeeper Ryan Boot made a string of vital stops as the Chairboys were unable to secure a third straight league victory

The hunt for the play-offs…

Exeter opened a five point cushion between themselves and the chasing play-off pack as they eased to a 3-1 victory over 9th placed Swindon. Despite going a goal down, Paul Tisdale’s side put in an impressive performance to secure all three points thanks to goals from Jake Taylor, Pierce Sweeney and Jayden Stockley. The result dealt a blow to Swindon’s play-off hopes, leaving The Robins two points adrift of seventh placed Mansfield, who lost 2-0 at Forest Green.

Coventry remain in 6th place thanks to a dominant performance against relegation-threatened Grimsby at the Ricoh Arena. A Mark McNulty hat-rick and a well taken headed goal from Peter Vincenti secured the Sky Blues a fourth victory in their last five league games.

Meanwhile eighth placed Lincoln City lost ground on the play-off positions after they were held to a 0-0 draw at Morecambe. Scott Wharton and Matt Green missed big chances to break the deadlock for The Imps as Danny Cowley’s side were left frustrated at the Globe Arena.

The battle for survival…

Martin Allen looks to have his work cut out in trying to keep Barnet in the Football League with the Bees seven points adrift of safety with seven games left to play following their loss at Luton on Saturday evening.

The big result at the bottom of the table was Chesterfield’s surprise win at home to fourth placed Notts County on Sunday. Sid Nelson and Zavon Hines scored first half goals to ensure The Spireites went into the break in front. Kevin Nolan’s side gave themselves a chance when Daniel Jones pulled a goal back with five minutes remaining but Chesterfield secured a vital three points when Kristian Dennis restored their two goal advantage in injury time. The result leaves Chesterfield just three points off safety and sucks both Grimsby and Port Vale back into the relegation battle.