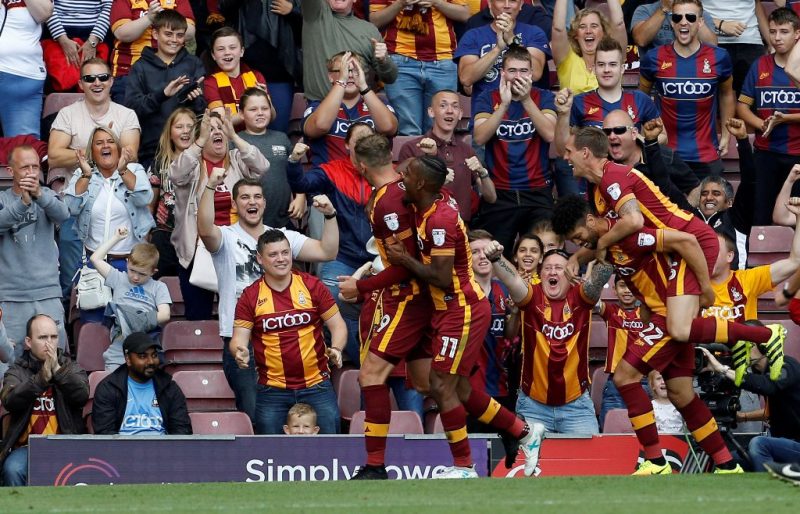 The good times haven’t exactly been absent from the Northern Commercials Stadium – rather they’ve faded in and out – but this season, under Stuart McCall, they look like they’re returning in full force.

After 12 games in League One Bradford City sit third in the table, just two points behind Wigan and four off leaders Shrewsbury. They’re producing some of the division’s finest football, bombing forward relentlessly – a fact demonstrated by kamikaze Bristol Rovers being the only team to have outscored them thus far.

And after a start that saw them exchange wonderful wins with disappointing defeats, the Bantams have now shaken off the rust and found their groove. Only Paul Cook’s Latics can match their run of four wins from their last five games – with the likes of MK Dons, Doncaster and Rotherham falling by the wayside.

McCall has installed a winning mentality in his players, and has moulded a squad that isn’t reliant on any one individual. Yes, Charlie Wyke’s six goals have been vital and Romain Vincelot’s four from midfield have been helpful, but this is truly a team in every sense of the word.

You see it when they score a goal, as the player’s come flooding together to celebrate the strike. You saw it yesterday when defenders Matthew Kilgallon and Nathaniel Knight-Percival both shunned the individual limelight as they agreed to a shared contract extension announcement. Speaking of Kilgallon, the experienced centre-half demonstrated his loyalty to the team this summer when he rejected a financially lucrative move abroad.

Saturday’s 4-1 thumping of the aforementioned Dons was the sixth time this season that McCall’s men have notched at least three goals in a game. This is an exciting team, bubbling with creativity and proving that the good old-fashioned 4-4-2 is no restriction to entertainment.

Wyke and Dominic Poleon, the usual starters up front, have netted 10 goals between them in all competitions this season – while fellow forward Omari Patrick has three goals on the season. Further back, Kilgallon and Knight-Percival have more than earned their contract extensions with their assured and combative displays this campaign.

McCall, too, should receive credit for the job he’s done since returning to West Yorkshire. A former Scotland international, he’s arguably only now delivering on the managerial promise he showed north of the border with Motherwell.

Indeed, that Scottish success is often sneered upon by those of us in sunnier climes. Even club chairmen often appear hesitant to reward success up north with a top job down south. Dominance with Celtic counted for little for Neil Lennon, Gordon Strachan and Tony Mowbray when it came to securing a Premier League post. They had to settle for the Championship, and Middlesbrough and Bolton respectively.

And while McCall’s next job was even further down the totem pole, he’s arguably having the most post-SPL success of any of them. He’s had to replace a man who was damn near part of the furniture at Bradford in Phil Parkinson, but yet he guided the club to the Play-Off final last year and is looking good to go one better this time out.

Everything is trending up for a grand old football club that would look great back in the Premier League someday. One step at a time, of course, but the first rung on the ladder appears ready to be climbed.